The India State of Forest Report, released by the Union Environment Minister, is a biennial forest report produced by the Ministry of Environment, Forests, and Climate Change every two years. The latest edition is the 17th in the series, and it is the result of a collaborative effort between the Forest Survey of India and other organizations. The report reads that India has a robust scientific system for periodic assessment of its forest cover, forest inventory, and inventory of trees considered outside forests. The survey provides critical inputs that determine the direction and objectives of resource management, policy formation, and data-based decision making. The data dependability is undeniable due to structural improvements in the techniques used.

The statistics include ortho-rectified LISS III data, derived from ResourceSat-2, to cover three months from October to December 2019. Three categories of forests surveyed, based on their area coverage and have been classified as very dense forests, moderately dense forests, and open forests. Canopies with a density of less than 10%, i.e. shrubs, are also assessed but are not classified as forests. The survey collected data from India's tiger corridors, tiger reserves, and lion conservation areas. It is the first time such parameters have gotten the attention of this report. 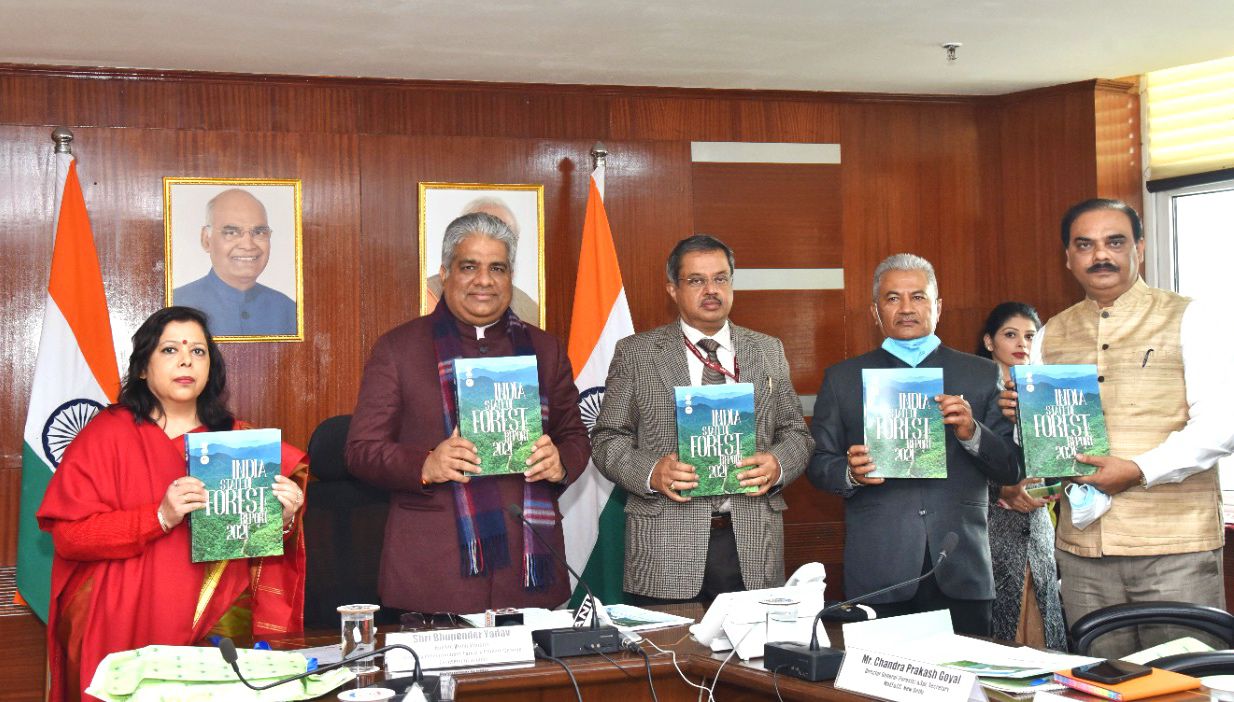 The country's overall forest and tree cover now account for 24.62 per cent of its entire land area and has resulted in a significant increase in the amount of land covered by forest. However, more effort is needed to meet the National Forest Policy's aim of 33 per cent forest cover. (Down to Earth).

The state with the most forest cover is Andhra Pradesh. Other states like Telangana, Odisha, Karnataka, and Jharkhand bagged the second, third, fourth, and fifth, respectively, in the list.

The forest cover of 140 hill districts shows a decline of 0.32 per cent, thus, equating to a total forest land loss of 902 square kilometres. This decrease might be due to infrastructure building and other developmental activities.

In the northeast, forest cover decreased by 0.60 per cent. The drop in the forest cover of Northeastern states might be due to a series of natural disasters in the region, including landslides and heavy rains, and human-made activities such as shifting cultivation, development pressures, and tree chopping. From the proportion mentioned in the previous report, the area covered by mangrove forests has presently increased.

Forest fires are said to be a threat in 22.27 per cent of forest cover.

The highest loss of forests happened in Telangana (Kawal), Karnataka (Bhadra) and West Bengal (the Sundarbans reserves). The forest cover in Arunachal Pradesh's Pakke Tiger Reserve is about 97 per cent, the highest in the country.

This time, a new chapter provides estimates for Above Ground Biomass (AGB) due to the collective efforts of FSI and ISRO's Space Application Centre (SAC). The initial findings for AGB estimations (including AGB maps) for the entire nation. However, a detailed report on this ongoing will be published later.

The information provided in the paper may provide insights for policy formulation, planning, and sustainable management of the country's forest and tree resources.

The research, as already mentioned, offers information on a variety of factors, such as forest cover in hilly districts, tribal areas, and the northeastern region. It is comprehensive and helpful for research and development.

The report got released by the Union Environment Minister Bhupender Yadav. But, dissatisfied with the results of a two-year evaluation, the minister has decided to form an internal research group within the ministry. This group aims to not only conduct a more thorough analysis of the report's conclusions but will also develop plans to improve community participation in forest protection.

Entrepreneur Pallonji Mistry Passes Away at 93