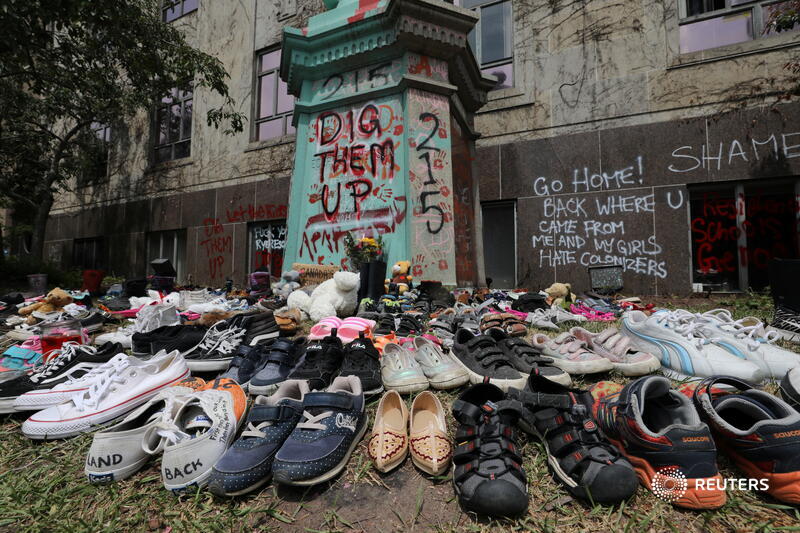 A massive grave buried unmarked with the remains of 215 Indigenous children was found with the assistance of a ground-penetrating radar specialist at the site of a Former Canadian Indian residential school in Kamloops on May 27, 2021. What happened at the school and why are these graves buried at the school?

Kamloops Canadian Indian Residential School was once the largest in Canada, with its enrollment peaking at 500 in the 1950s. It was under the Canadian Indian Residential School system which was a network of free boarding schools for indigenous people. The school was operated by a Catholic church from 1890 to 1969. Then was taken over by the federal government to serve as a local day school till 1978. 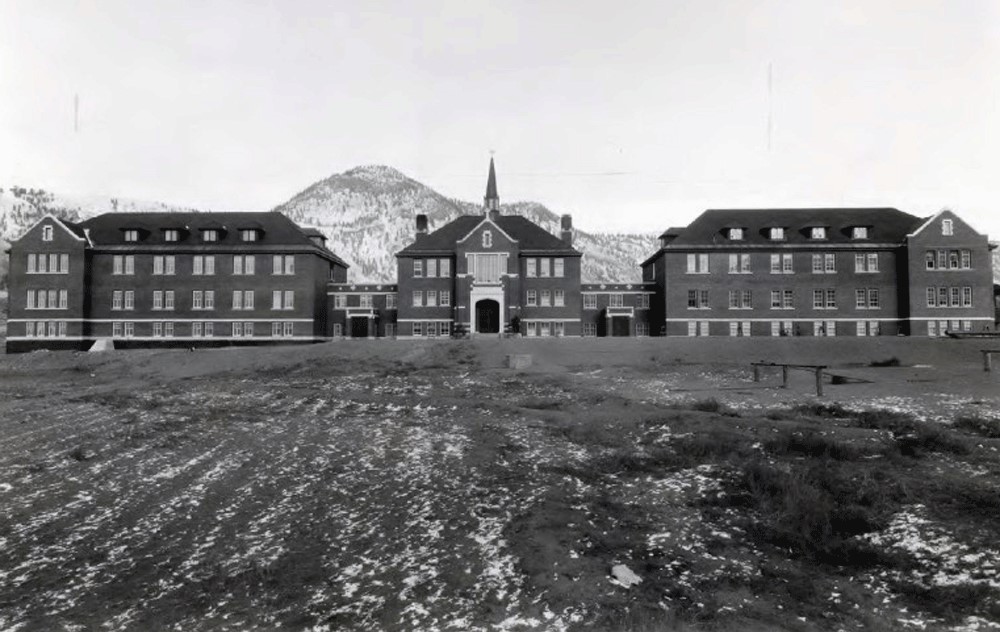 This Candian Indian Residential Indian school system was created for the sole purpose to remove the influence of the Indigenous children’s own culture and integrating them into the dominant Canadian culture. To kill the identity of the child, which led to many school-related deaths estimated up to 6,000.

Due to this school system, this residential school also affected the lives of the children's such as those who attended the school were not allowed to speak their native Shuswap language and were whipped for using it and the funding for the school got worse in 1910, making the school not able to provide enough money to properly feed the students. 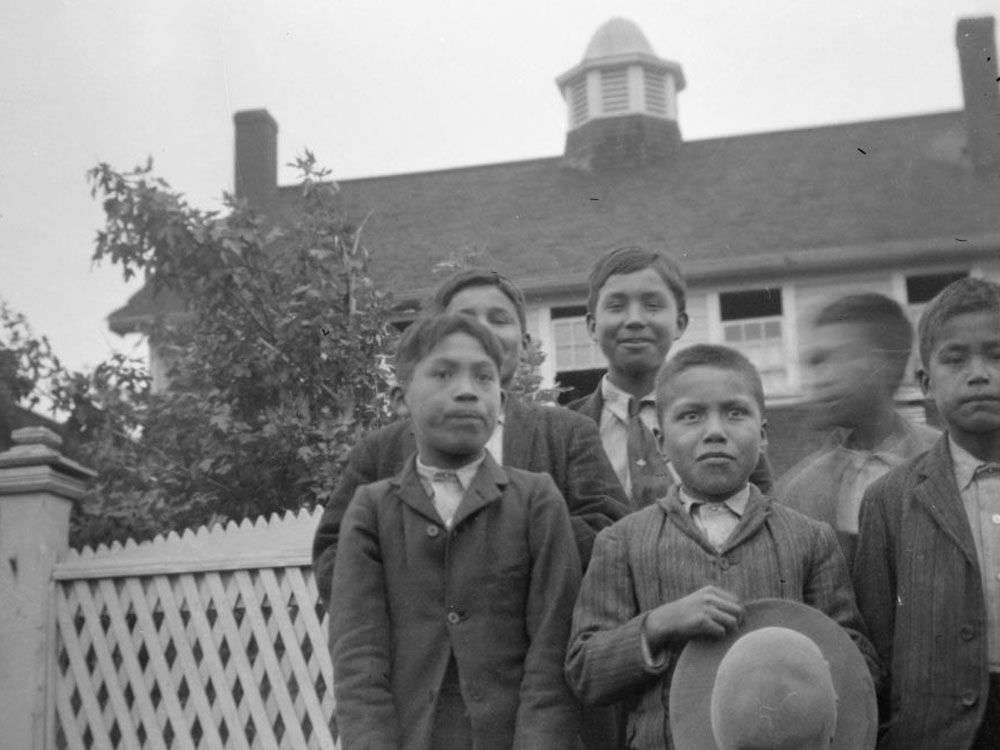 The fact of the enormity of hunger at the school was stated by George Manual, Founder of the World Council of Indigenous people who stated as one of those memories which he remembers from the school he studied.

In fact, the major incidents of large death toll happened due to the improper infrastructure of the school identifying the stairs built steep and narrow to save materials. In 1924, there was a fire incident on girl’s wing due to which 40 children were forced into −10 °C weather in only their night clothes and in the year 1927, a report outlined the school’s poor construction of buildings & its conditions which has lead to numerous diseases for the students like infections, colds, bronchitis, and pneumonia during the winter. 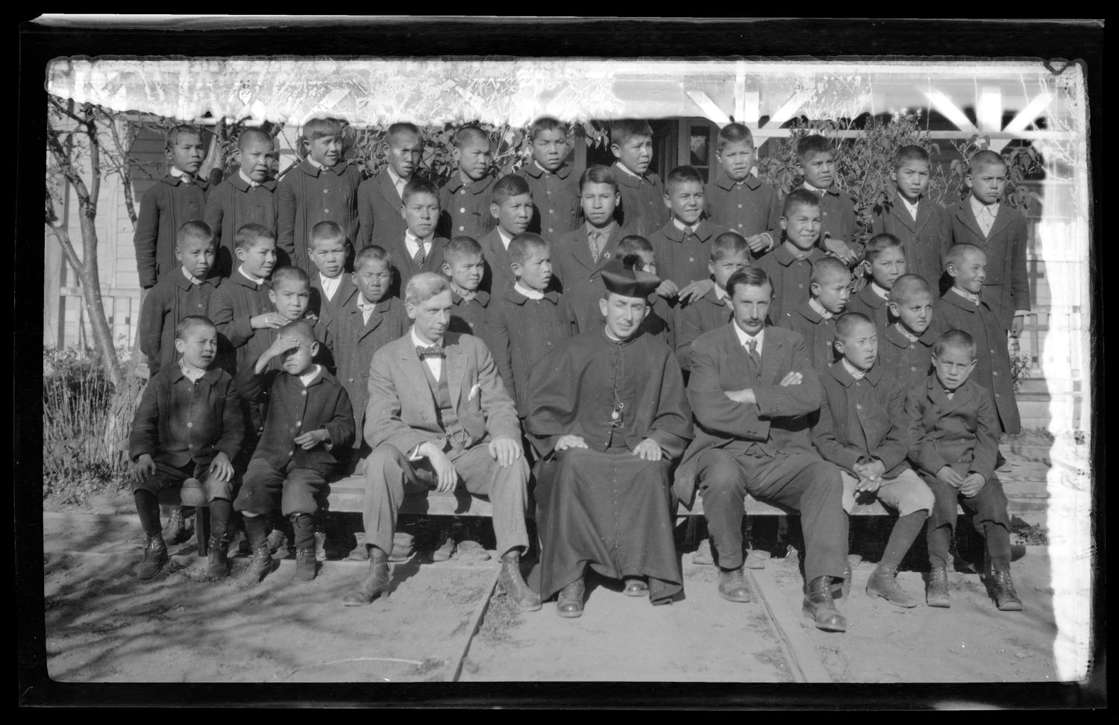 Even during the Influenza pandemic (1957-1958), the district health officer at Kamloops reported half of the students were ill and in 2015, the Truth and Reconciliation Commission of Canada determined that the residential schools were a system of "cultural genocide" concluding that at least 4,100 students died while attending the schools, many of them due to abuse, negligence, disease, and accidents. The report concluded that it would be very impossible to estimate the total no. of deaths that occurred at these residential schools.

The Kamloops Indian Residential school even used to have mandatory European folk dance programs but was restricted for the Indigenous people and if any student was reported to be participating, they were subjected to harsh punishment, including being hit with a Shillelagh or being badly humiliated for mistakes. Yet, the Truth and Reconciliation Commission has records of only 51 children being dead but the First Nations says that there are more deaths that were spoken of but were not documented. 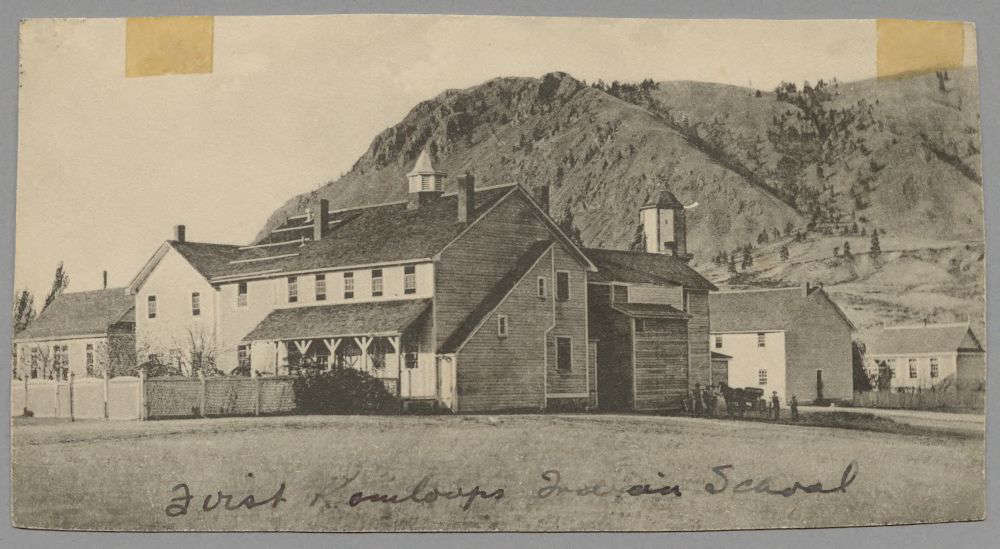 There is also a CBC Documentary by George Robertson in 1972 “The Eyes of the Children” where it documents the lives of the children at the Kamloops Residential School but only shows the good side of the school ignoring the deaths, sex crimes, military-type discipline, etc.

Yet, in another documentary The Fallen Feather, Ernie Philip shared his experience of corporal punishment as a student at the school, stating that he "got 50 lashes on my back".

During a 1918 visit by the Indian Agent J. Smith wrote that the school’s dinner portions “looked from where I sat to be very slim for growing boys”. Many others described similar experiences of the school being traumatic. Frank Gottfriedson, was one of them who attended Kamloops Indian Residential School for nine years, told the National Post in 1999 that “it’s like going to prison”.

Even the strictures at the residential school were enforced by a military-style discipline, which went beyond the corporal punishment, such as the meals had to be eaten in perfect silence, students were woken every morning at six, and if they don’t, their faces are dumped onto the floor by supervisors. Students' pants were pulled down in front of the school to receive strappings for chewing gum, wetting the bed, or forgetting to wear a hair barrette.

Many children were even shipped to the school in an open lorry soon dubbed “the cattle truck.” Upon arrival, a number was written onto the child’s arm in purple ink. This became the moniker by which they were referred for the rest of their time at the school. The Outgoing mails were censored out and the students faced punishment if they complained about the lack of food or poor conditions at the school.

For much of the school’s history, it would supplement its meager budget with cattle herds all tended by the students. Nevertheless, no beef or milk fat ever found its way into the mess hall. Breakfast was a flavorless porridge while teachers ate bacon and eggs. Lunch and dinner were a mixture of vegetables and boiled fish.

Other former students also reported eating toothpaste at night to calm growling stomachs, or of assembling elaborate black markets for food nicked from school pantries or diverted from school orchards and dairy farms.

As the years passed by, the Kamloops Indian Residential School abandoned some of its extreme practices and there were few improvements such as teachers were allowing token items of Indigenous art to be hung in the hallways and three students from the school presented a paper at a university’s symposium declaring that “no matter how modern the Indians become, they should never forget their native language, culture, and heritage.

There have been many Indigenous students who have come forward to tell their experiences and the teachers also have openly talked about the toxic environment the residential schools had on Indigenous children.

In 1988, Kamloops Indian Residential School had played a central role in one of the first major exposures of the traumas imposed by the Canadian Indian Residential school system and that saw the publication of Resistance and Renewal, a book by the ethnographer Celia Haig-Brown assembling accounts from 16 former Kamloops students and until then, there have been feel-good articles published of civic achievement from the school.

Now, the remains are found near the school. This discovery has invoked a lot of discussion among people to identify these children and tell their stories to the world. Regional Chief of the British Columbia Assembly of First Nations, Terry Teegee, said in May that the plans were being made for forensic experts to exhume, identify and repatriate the remains of the children from the school and the radar survey is ongoing, with complete preliminary findings expected by mid-June 2021. But for now, people and the authorities are sending their messages of sorrow and grief for these buried unmarked children whose identities are still unknown.

Tk'emlúps te Secwépemc paying their deepest respect and love for those lost children and their families said they are working with the BC Coroners Service, contacting the students' home communities, protecting the remains, and dealing with museums to seek out records of those deaths. Some were identified as being as young as three years old.

Another statement to CBC, Lisa Lapointe, B.C.'s chief coroner, said the Coroners Service was alerted to the discovery on Thursday and they are in the process of gathering information and will continue to collaboratively work with the Tk'emlúps te Secwépemc and others as this sensitive work progresses,". Lapointe added that they recognize the tragic, heartbreaking devastation that the Canadian residential school system has inflicted upon so many, and our thoughts are with all of those who are in mourning today."

First Nations Health Authority CEO Richard Jock wrote in a statement that this situation exists is sadly not a surprise and illustrates the damaging and lasting impacts that the residential school system continues to have on First Nations people, their families, and communities,'' continued "Today we honor the lives of those children, and hold prayers that they, and their families, may finally be at peace."

There were a lot of other people also who agreed to support, Federal Minister of Indigenous Services Marc Miller in a tweet said he had been in touch with Casimir to offer his support and John Horgan also issued his statement expressing his horror and heartbreak at the discovery: "This is a tragedy of unimaginable proportions. And it’s a stark example of the violence the Canadian residential school system inflicted upon Indigenous peoples and how the ramification of these atrocities continues till this day," said Horgan.

On May 30, Ordered flags on federal buildings were flown, and Manitoba legislatures with individual municipalities such as Ottawa, Montreal, Edmonton, Mississauga, Brampton, and Toronto, also ordered the 3D Toronto Sign dimmed for 215 hours.

On May 31, a statement released by the Office of the Chief of Tk’emlúps te Secwépemc acknowledging gestures made by government and federal parties but insisted the government face liability to all the communities that were subjected to enduring effects of the federally-mandated Indian Residential School system.

The Executive director for the Indian Residential School Survivors Society, Angela White has also called on the Canadian federal government and Catholic Church to take action and responsibility around reconciliation efforts. 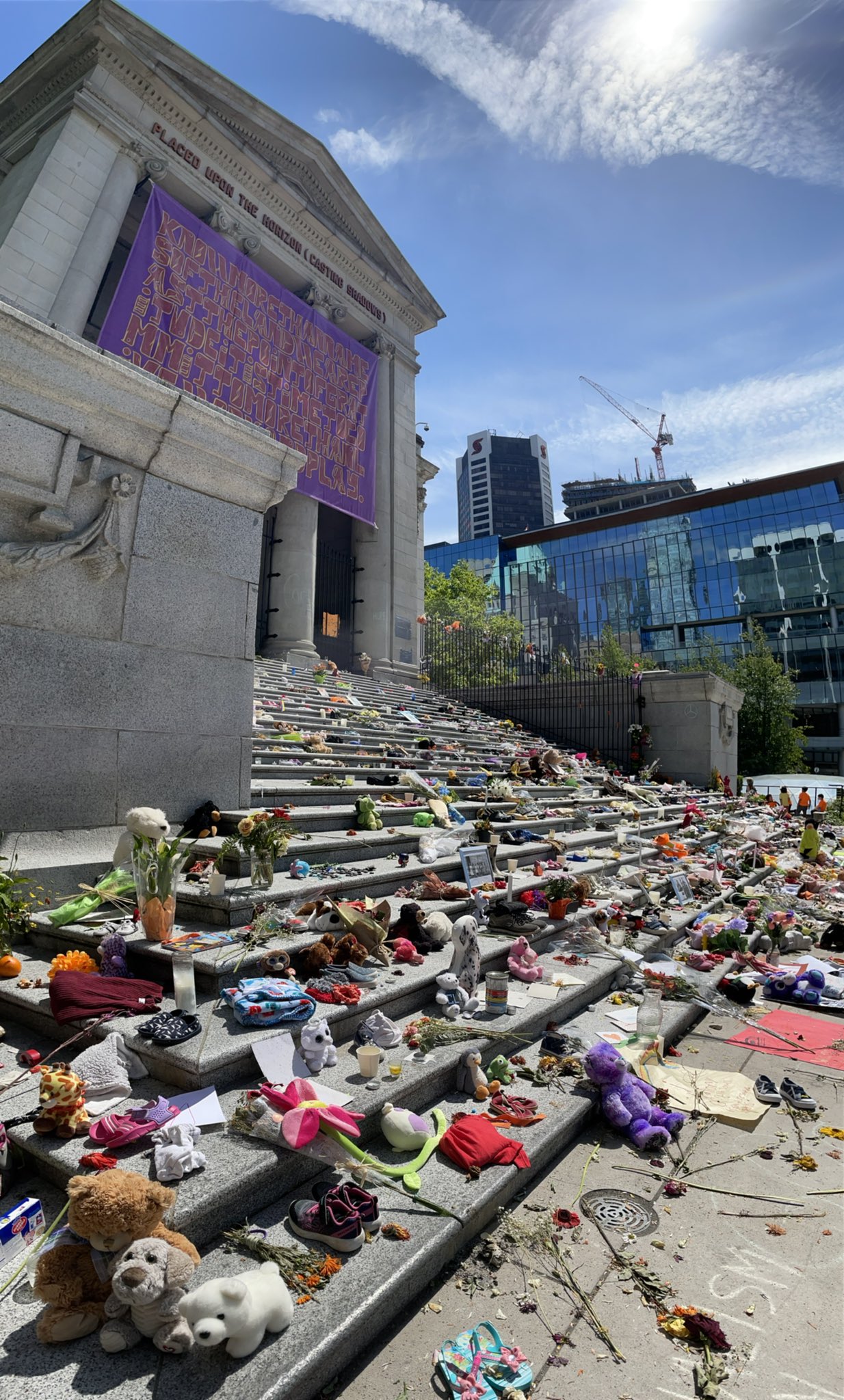 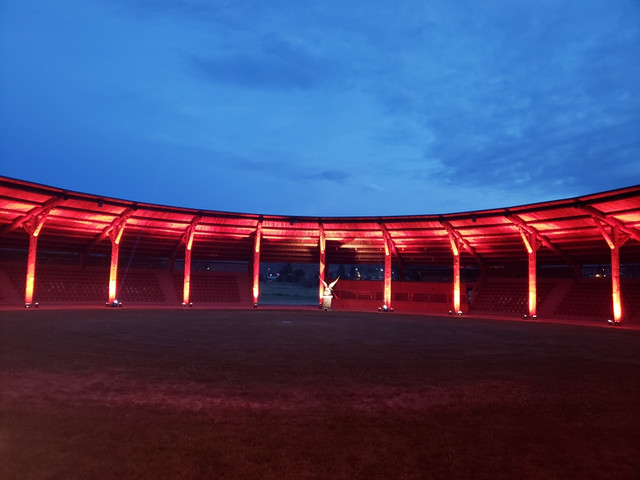 (Above) - Outside the Vancouver art gallery, the citizens have paid tribute to the 215 children, and The Kamloops Residential School were lit up to honor the children (Below) PC: Tk’emlúps te Secwépemc

The discovery also inspired a community memorial at the Vancouver Art Gallery, at which 215 pairs of children's shoes were laid out in rows and similar memorials were created across Canada, including in front of government buildings and church buildings that had been in charge of running the residential school system and there were several campaigns as well. 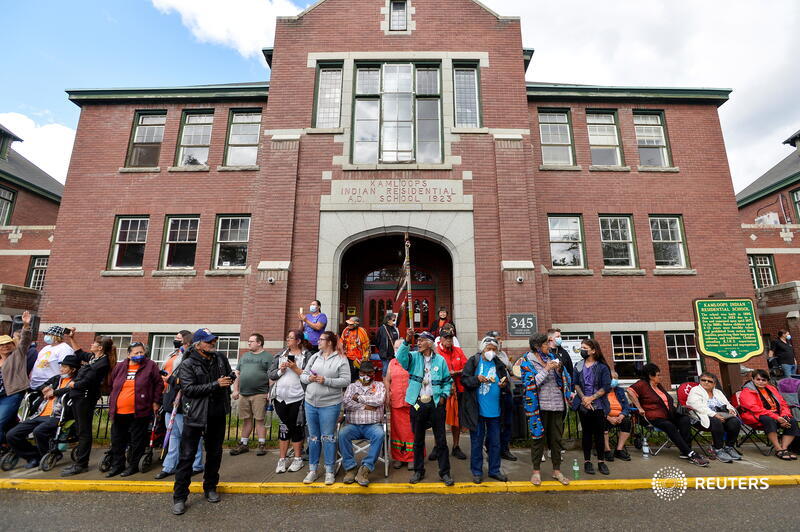 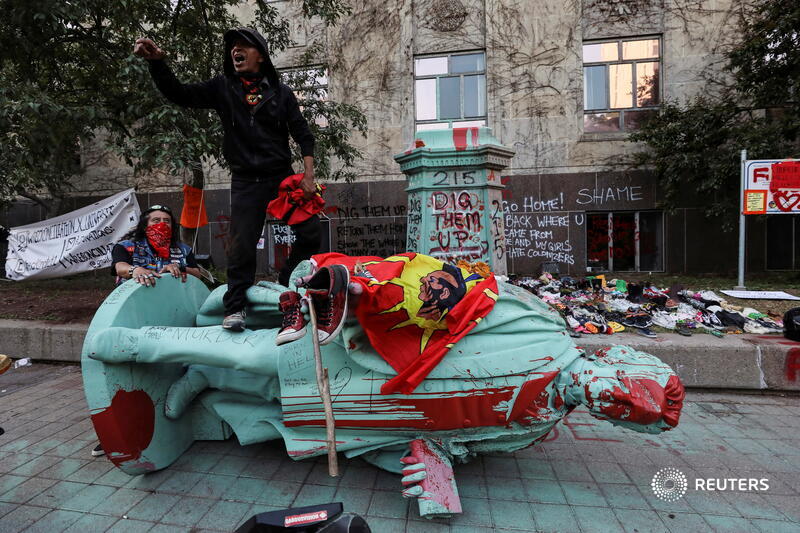 Over June, Archbishop of Vancouver J. Micheal Miller said that the Catholic Church would aid in the identification of the deceased children and nine UN human rights experts called on Canada and the Catholic Church urging authorities to conduct thorough and full-fledged investigations into the circumstances and responsibilities surrounding these deaths, including forensic examinations of the remains found, and to proceed to the identification and registration of the missing children. On June 6, people gathered with COVID-19 protocols at St. Peter's Square, Pope Francis commented on the discovery with a prayer.

There have been two crisis lines created to provide support, for former students and those affected from residential schools. One is the National Indian Residential School Crisis Line which can be accessed by calling the 24-hour national crisis line: 1-866 925-4419 and The KUU-US Crisis Line Society which provides a First Nations and Indigenous-specific crisis line available for 24 hours a day, seven days a week. It's free to be reached at 1-800-588-8717 or online at www.kuu-us crisis line.com.