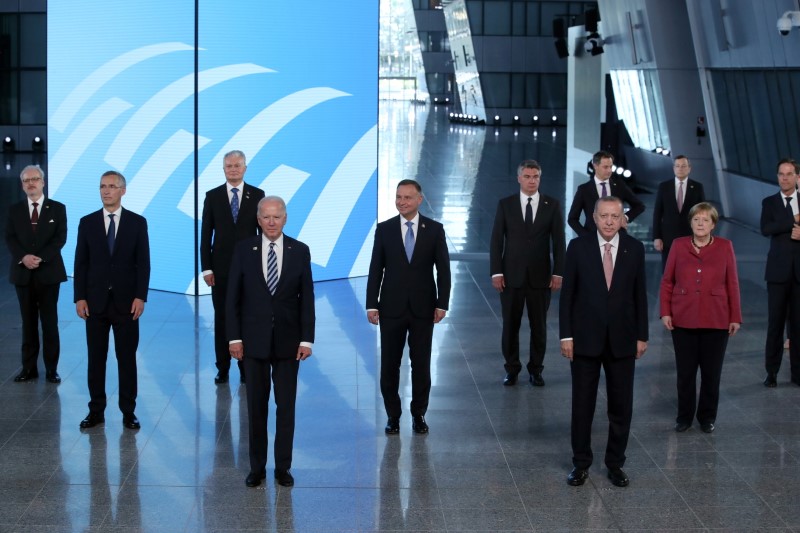 In the NATO summit communique, the G7 nations reached a crucial consensus by identifying China’s destabilizing force and systemic challenge. The 47th G-7 summit’s importance was determined by the US president Joe Biden who played an integral role in the Alliance after Trump’s dramatic exit. Mr. Biden said: “We believe that NATO is vital to our ability to maintain American security.”

Besides Biden’s reaffirmation in the North Atlantic Organization, the communique discussed the projection capabilities growth and geopolitical challenges posed by China and its partnership with Russia.

Although NATO’s Secretary-General Jens Stoltenberg repeatedly said that China is not our “enemy.” He said, ''We are concerned by China’s coercive policies, which stand-in, a contrast to the fundamental values enshrined in the Washington Treaty.'' China is rapidly expanding its nuclear arsenal with more warheads and an increasing number of sophisticated delivery systems. It is opaque in implementing its military modernization.

It is cooperating militarily with Russia, including through exercises in the Euro-Atlantic area. We also remain concerned about China’s use of disinformation.”

China remains the second-biggest spender in defense after the US, with its military spending of over US $209 billion. The economic coercion, intimidatory diplomacy, and increasing military, nuclear arsenal, and technological development made China the chief topic of discussion in the communique.

Besides this, NATO remains worried that in the upcoming period, China-Russia might develop a quasi-alliance. This summit reflected a blueprint of the footprint of democratic alliance sowing seeds across the world.

The group once known as G8 removed Russia after the illegal annexation of Crimea from Ukraine in 2014 and since remained reluctant to add it back. However, NATO certainly tried to play Russia off against China, the same way, they invited two countries from the BRICS alliance India and South Africa to the G7 meeting in the UK.

This meeting came as a move against China’s infrastructure development in Afghanistan, the Indo-Pacific region, and the Middle East. Russia and China started to fill the gaps as soon as the US and NATO began military withdrawal from Afghanistan.

China, Russia, Iran, and Pakistan (CRIP) alliance recently developed a strong political and strategic relationship. As per the CRIP alliance, they stand as a countermeasure to QUAD.

On 22 March 2021, Russian Foreign Minister Sergey Lavrov and his Chinese counterpart Wang Yi met in Zhuang province in southern China. In the meeting, the nations condemned all assertions of human rights violations and focused on economic and trade development.

Sergey Lavrov said: “For us, China is a true strategic partner and like-minded friend. Our cooperation in the international arena will have a stabilizing effect on the global and regional situation.”

China and Russia actively discussed Iran’s nuclear deal and urged the US to resume compliance with JCPOA. Meanwhile, China signed a 25-year cooperation agreement with the Islamic Republic of Iran. The consensus comprised China's $400 billion investment in Iran in exchange for a steady oil supply to its growing economy. The ambitious strategic move brought Iran into China’s Belt and Road Initiative.

Common grounds of aversion against India and the border disputes made China and Pakistan iron brothers. China's investment of over $64 billion in Pakistan’s infrastructure development as part of the China-Pakistan Economic Corridor (CPEC) and its Rash Akai SEZ, which aims to create over 200,000 job opportunities, strengthened their bilateral bond.

This emergence of authoritarian nations' kinship poses a geopolitical challenge to democratic countries. China’s security institutions, such as Shanghai Cooperation Organization, have brought military and intelligence facilities incentives. International North-South Transport Corridor, Trans-Afghan Railway, and CPEC have augmented the ground with the creation of Special Economic Zones on the border with Afghanistan.

With over 72 percent of China’s oil import and the decline of oil consumption in the rest of the world, China has become the primary buyer of Middle Eastern oil, strengthening its geopolitical grasp.

Chinese Premier Xi achieved his enormous diplomatic victory in the silence of the Arab world in the alleged “genocide” of Uyghur Muslims in the Xinjiang province of China. Other than that, the highly contentious China 5G tech company Huawei has now been named co-chair of the OIC. Over six Middle Eastern countries – Bahrain, Egypt, Iran, Iraq, Jordan, and Lebanon, have approved the Sinopharm vaccine.

UAE and Iran's contentious relationship to become regional hegemon sometimes remained a cause of concern, but China successfully kept a balanced geostrategic relationship with both of them. China has become the largest trading partner of the UAE. With the Port of Jebel Ali project, UAE became part of BRI as well.

Amid the increasing economic and geopolitical influence, the US singled out China as a threat in the South China Sea at the NATO summit. There it militarized artificial islands to annex Taiwan if it felt “necessary.”

After the summit, China rebuked NATO’s statements and said that it was “slander on China’s peaceful development, a misjudgment of the international situation and [NATO’s] own role, and a continuation of the Cold War mentality.”

What is NATO’s next move?

The assertion on China’s position gave Biden a victorious entry into the NATO summit. But the real challenge for the seven wealthiest nations of the world lies in how they will tackle the posed threat.

The summit communique provided a brief stance on the growing influence of China and Russia but remained careful with their choice of words.

While Biden laid unique assertions, others chose to make sure that the NATO group does not stand for an “anti-China” group.

German Chancellor Angela Merkel said China as a threat “should not be overstated,” because Beijing, like Russia, is also a partner in some areas.

While France's President Emmanuel Macron urged the alliance to focus on other security concerns as well. Macron said, “I think it is crucial not to scatter our efforts and not have biases in our relation to China.”

Even NATO Secretary-General Jens Stoltenberg said there is no new cold war with China, but the western allies have to adapt to the challenge of Beijing's rise.

"We are not entering a new cold war, and China is not our adversary, not our enemy," Stoltenberg told reports after a NATO leaders' summit. "But we need to address together, like the alliance, the challenges that the rise of China poses to our security.''

NATO needs to strengthen its commitment to resilience and create a balance between security concerns with economic and trade ties. “Build Back Better World” or B3W is one of the initiatives they have come up with. In this, the NATO alliance decided to invest in the infrastructure of the poorer countries, which is a counter initiative to China’s Belt and Road initiative.

Without a clear plan of action, the NATO summit communique will remain a verbal struggle, and the nations will lose their chance to make a recognizable impact.

China immediately rebuked NATOs remarks and called their defense policy “defensive in nature” and urged NATO to “devote more of its energy to promoting dialogue.”

The response came on the same day when it flew 28 air force jets into Taiwan’s air defense zone. This reaction is the fifth and immense incursion this month. China said that modernization and its military development is “rational,” and that West countries need to "stop taking China's legitimate interests and rights as an excuse to manipulate bloc politics, create confrontation and fuel geopolitical competition."