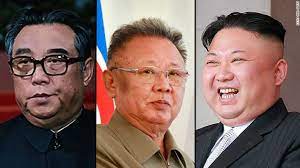 Between 1910 to 1945, Korea was under Japanese colonization. After 35 years of colonization in Korea, Japan surrendered to its allies, dividing Korea into two separate countries: Communist North Korea and Capitalist South Korea. North Korea's leadership is highly centralized, with the Supreme Leader exerting strict control. Kim II Sung, the most vicious dictator the world has ever known, was the founder and ruler of North Korea. Citizens think Kim II Sung led them to victory in World War II and the Korean War over Japan and America. It compelled them to worship him close to God and to obey his commands without doubt. Since then, North Korea has become under the power of Kim II Sung, and they have closed their door of freedom to the citizens.

It is now 70 years since North Korea became isolated from the rest of the world. Trying to figure out what kind of life the people lead in North Korea is an enigma. We will never have a way to take a look inside and explore deeper. Yet, the life of North Korean citizens is still a massively controversial topic for years. Many are afraid to talk about life in North Korea. Even media from outside has limits and rules. However, some came out from risking their lives to tell the story of North Korea.

The communist dynasty was officially born after the death of Kim II Sung, as his son Kim Jong II acquired the leadership. That's where the Kim government rose to prominence. Kim Jong II was a psychotic cruel psychopath tyrant, like his father. Although his mission was to protect his people, he found pleasure in torturing and executing hundreds of people. He, like his father, has deceived the public into believing that the world outside of North Korea is bleak and deadly.

In 1990, a famine struck out of nowhere, driving the population insane. In the Revolutionary Capital, however, everything was as usual. People went about their business as normal. No beggars or homeless children were wandering around. But the village life of people in North Korea was quite the opposite. There was even a rumour about the increase of cannibalism. Kim II Sung spent loads of money on nuclear missiles and weapons while their citizens were dying from starvation. Yet, the people believed that the heroic family had saved their homeland, and Kim Jong II was a great warrior who created everything for them.

North Korea is known for Kim's authoritarian ideology and propaganda. Even the toys they have designed are to teach them about their ideological upbringing. Their primary objectives were children. Residents are deluded into believing that South Korea is an impoverished country. Children in nations such as South Korea and America are wandering for food, according to teachers. They also instructed the children that if they come across a Yankee, they should throw stones at him because they were the ones who turned South Korea into hell. Their worldview is that North Korea is the world's sole utopia.

North Korea has the least privacy in the entire world. Neighbours keep an eye on their neighbours while children spy on other children. In every house, there would be two portraits of their leaders. The portraits have more value than human life. The citizens need to clean every day. Otherwise, they should face punishment. The armies visit the house in the middle of the night to check the portrait of their leaders. The Government will be monitoring their activity daily.  It's against the law to be allowed to speak the truth.  The documentaries of Kim's dynasty are the only thing that people in this region can watch on television.

One of the things that the public must obey is rules. The law of North Korea is a codified civil law system inherited from the Japanese and influenced by the Soviet Union. Even though the law in North Korea talks about freedom, in reality, there is no freedom for anything.  As part of their subjugation, they are not even allowed to choose their hairstyle.  There is a special law about it.  Watching an English film or listening to foreign music is a criminal offense punishable by prison.  Despite the lack of censorship, many people watch movies in English.  The punishments for a simple mistake are harsh. Public executions and detention in labor camps or prisons are the worst punishments in North Korea.  If the citizen convicts a felony, the person who is found guilty and their family and consequently two generations born at the camp must remain there. People are living in fear every day as if they are waiting for their end. They are thankful for a new day that they can spend their time with the people they love.

Today North Korea is ruled by 37-year-old Kim Jong Un. Even though people were hoping for a change after his father's death, it is just the same as before. He is a cold-blooded monster who leads his people into fear, hunger, and oppression. His identity was unknown until his father asked to come back from Switzerland. Following his father's death, he has become the supreme leader in North Korea. He has been following his grandfather's and father's steps since then. Kim Jong-Un's brutality is well-known in the world. He ordered severe punishment, even if they were citizens or not. Disrespecting the Kim dynasty is a horrible crime in North Korea. Otto Warmbier, an American 22 years old teenager. During his visit to North Korea, the man was convicted for trying to steal a propaganda poster from his hotel. He was sentenced to 15 years in prison for hard work. But due to all the bullying and violence, he suffered from a severe neurological problem. Later he fell into a coma and died.

Many want to escape from the dictorial regime of Kim Jong-Un. However, escaping from North Korea is hazardous. Still, many jeopardize their soul to run away to freedom. Just like games, some win, some suffer. It doesn't matter whether you are a child or not; you will suffer.

North Korea is also a state sponsor of terrorism and an exporter of missiles. The regime is renowned for selling weapons to rogue states. They are developing millions of nuclear weapons every day. Despite all the military powers and nuclear weapons that they have, North Korea is the poorest country in the world. People are living in slums and dying out of hunger. But the revolutionary city, Pyongyang, remains unchanged, as it is well-occupied with luxurious living.

North Korea is considered one of the most dangerous countries on earth. It is a country run by dictatorships and has a long history of human rights violations. However, one day, people will rise again. They will wipe out all of the Kim dynasty's stupid ideology. Let them walk again freely without any fears!