Politics Within Party In Karnataka 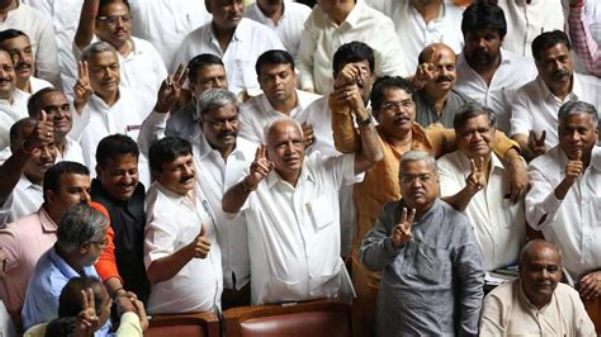 Tensions within the BJP high command grew after Karnataka MLC AH Vishwanath accused the Irrigation Department of framing a tender of 21,473.67 crores in a hurry without approval from the Finance Department. The BJP leader stated that the tender meant for the Bhadra Upper Canal and Cauvery Irrigation project was cleared hurriedly to receive "kickbacks" of 10% from contractors. "Is this a contractor-oriented project?" a report quoted him saying. He accused BS Yediyurappa's son, BY Vijeyandra, of interfering in the functioning of the government. These accusations came amid the 3-day visit of state general secretary Arun Singh to discuss rising discontentment regarding BS Yediyurappa's position.

The Upper Bhadra project is a lift irrigation scheme in central Karnataka designed to irrigate 2.25 lakh hectares in Chitradurga, Davangere, Tumakuru, and parts of Chikkamagaluru. The two-decade-old project received the status of "national project" in December of 2020, where the Centre's Jal Shakti Ministry cleared an estimate of 16,125 crores and expected to be completed within three years.

Water Resources Secretary, Laxmanrao Peshve claimed the allegations as "baseless" and addressed the tender process as, "completely transparent". The BJP state general secretary addressed the media and clarified that the opposition was only from two to three members of the cabinet but the rest stood firmly behind the Chief Minister, BS Yediyurappa. He also stated that the center has an unyielding belief in Mr. Yediyurappa's efficiency, and there will be no replacement for the Chief minister's position. However, according to media reports, Arun Singh asked BY Vijeyendra to stay off matters concerning the governmental functioning of the state.

The BJP emerged as the single major party in 2004 after members from JD(S) and JD(U) left the Janata Dal(formerly known as Janata Party) to enter BJP. With Congress being the major undisputed political party in Karnataka since 1947, D.Devraj Urs's exit from the party in 1980, contributed indirectly to the decline of Congress in Karnataka. Since 1983, after the Janata Party came victorious, there have been continuous shifts in the assembly election results, with no party getting successive second term since 1985. Although with BJP setting up a firm foot in Karnataka, their rule has not been without stiff challenge. In the 2008 elections, failing to secure a simple majority, the BJP had to resort to buying candidates which are known as the now-infamous "Operation Kamala".

The two dominant castes, Lingayats, and the Vokkaligas play a significant role in determining the swerve of the state's politics. This hasn't been clearer than during the Janata party's split by 1999. As a compromise of both communities, the stability of the party was maintained with HD Deve Gowda (Vokkaliga) in the center as the Prime Minister and JH Patel(Lingayat) as the Chief Minister. But since the return of Mr. Gowda, after being unseated in less than a year, turmoil grew, and the Janata Party split in two.

The JD(Secular) was led by Mr. Gowda and the JD(U) was led by Mr. Patel. The only time when the members of other castes had prevalence was during the time of Mr. Urs. BJP's Lingayat face, BS Yediyurappa, plays a major role in determining the political weight of BJP in Karnataka.

The BJP suffered heavily in the 2013 elections after the resignation of Mr. Yediyurappa about his corruption charges. Due to Mr. Yediyurappa's new outfit, KJP(Karnataka Janata Paksha), the Lingayat support behind BJP split, leading to their loss to INC in the 2013 elections. However, his return to BJP and re-appointment in 2016 as the state party president, somewhat steadied the ship of BJP. This experience of the BJP may have played a vital factor in the recent wholehearted support of Arun Singh behind the non-replacement of Mr.Yediyurappa.

The BJP's decision-making in Karnataka is akin to walking on eggshells due to the volatile nature of Karnataka politics. Disgruntled BJP leader AH Vishwanath's relentless opposition towards BS Yediyurappa had little to no effect on the BJP high command's decision. Along with Aravind Bellad, Mr. Vishwanath's discontentment with the BJP chief minister and their public disclosures has hurt the BJP's interest, especially after coming from their overwhelming loss in West Bengal.

Except for the Kolavas and the Brahmins, BJP does not have a certain demographic that will ensure their win for the years to come. Hence, BJP cannot make the mistake of secluding Mr. Yediyurappa from the Party as the Lingayat vote bank depends on keeping him as the head of the state.

The Congress's dwindling existence in the country and in-fighting among the supporters of Mr.Siddaramaiah and Mr.Shivakumar in the state has only hurt its cause further. Since 1985 and particularly after the exit of Mr.Urs, Congress hasn't been able to win two successive terms in assembly elections.

The post-alliance with JD(S) in the 2018 elections, somewhat kept Congress in the game although uncertainty looms among the party to ever gain a majority. All-in-all, the political stability of any party in the state of Karnataka is extremely volatile, and no party has both their foot planted firmly in the state.