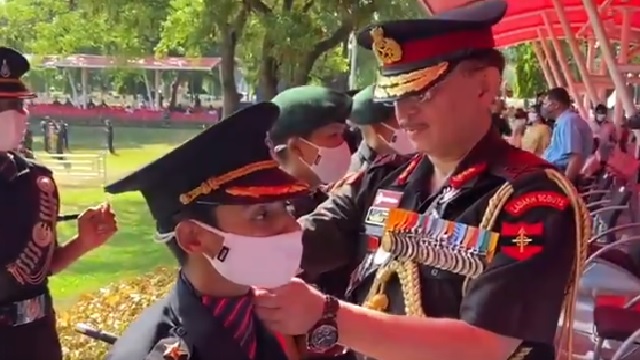 Nikita Kaul, the wife of Pulwama attack hero Major Vibhuti Shankar Dhoundiyal, who lost his life while battling off the Jaish-e-Mohammad (JeM) terrorist in the Pulwama region of Kashmir in 2019, now dons the olive-green uniform.

Lieutenant Nikita Kaul passed out with flying colors from Officers Training Academy in Chennai last week. Kaul, who hails from Kashmir, cleared the short service commissioner examination and, interview back in 2020. She believes that it was her way of paying tribute to her martyred husband. After securing her position in the Indian infantry, she feels even closer to the officer.

While talking about her decision to join the Indian militia, she revealed that initially, she took her own time to recover from the tremendous loss and deep grief. But she was clear that she wanted to tread on a path similar to that of her husband. The braveheart lost her husband on February 18, 2019. With her sheer grit and determination, she gathered the courage and went back to work after 15 days of losing her beloved. All she wanted was to begin afresh, keep herself buried in the work and find a speck of positivity to continue with her everyday life.

The couple was eagerly looking forward to celebrating their first anniversary, but fate had its destiny. The duo tied the knot in April 2019, and the same year Major Vibhuti succumbed. He was awarded Shaurya Chakra for laying his life for the nation.

Lt. Gen. Joshi, the General Officer Commanding-in-Chief of the Udhampur-based northern command, tweeted to congratulate Nikita Kaul and wrote, “#MajVibhutiShankarDhoundiyal, made the Supreme Sacrifice at #Pulwama in 2019, was awarded SC (P). Today his wife @Nitikakaul dons #IndianArmy uniform, paying him a befitting tribute. A proud moment for her as Lt Gen Y K Joshi, #ArmyCdrNC himself pips the Stars on her shoulders.”

Lieutenant Kaul left her job at an MNC to join the Indian Army. It was her way of finding hope amid hopelessness. And display a firm zest for living a life less ordinary and embracing a path to serve the motherland. She drew inspiration from her husband, who gave the supreme sacrifice while fighting for the nation.

The inflicted hardship on her could not deter her from realizing her dreams. Her love did not dwindle post Majors demise. Instead, she grew stronger, grew firm in the decision, and strived hard to reach the pinnacle. She found solace in her newfound dream, and that gave a new meaning to her life.

On February 14, 2019, a suicide bomber took the life of 40 CRPF jawans in the Pulwama region of Jammu and Kashmir. The suicide bomber was identified as Adil Ahmed Dhar, who was associated with the terror group Jaish-e-Mohammad. He bumped into a bus carrying CRPF personnel.

Following the attack, the Modi government came under severe criticism over the intelligence failure, and calls of sector commander CRPF to airlift the jawans stranded at a transit camp in Jammu and Kashmir fell on deaf ears.

However, Nikita’s journey has been inspiring, “You need to do something with your life. You will have to take risks and lead an independent life where you can make decisions of your own.'' Delving deeper, she said women must give themselves enough chance to live their dreams. "Sometimes, we do not share things thinking they might not be possible but, have you given yourself enough chance?" she was quoted saying to a source.

Furthermore, her heartening message to all the women out there was to, ‘Start something now. Don't wait for an end to have a beginning. Take a step, break monotony.’ While talking about her family, Kaul mentioned that she receives immense strength and support from all her family members. Who continuously encourage her to rise and make her own decisions. Moreover, she also attributed her mother-in-law and sister-in-law as the strongest women in her life.

Nikita met Dhoundiyal while she was studying for MBA and fell in love with him. Interestingly, while giving her interview for the armed services, the board of directors asked her how long she was married.

To everyone's surprise, she instantaneously said two years. While the board questioned her again, saying that they have heard that she was married for nine months. To this Kaul replied, that even though Major is not physically present, she still feels that he is still with her. And thus, her marriage has not ended yet.

Her courage is contagious. She undoubtedly proved her mettle in the worst situation. The young lady left no stone unturned with a keen desire to succeed, turned the wheel of fortune. She went on to cast an indelible impression on the minds of every Indian.