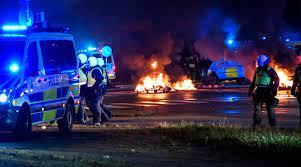 The clash hits different areas of the country, especially Norrkoping and Malmo

A group of few right-wing extremists assembled during the weekend to purportedly burn the holy book of the Islamic group-‘Quran' and it created riots in the city of Sweden. According to the reports, around 26 police officers and 14 civilians have been injured. And 20 police cars have been set on fire. The violence broke out in Norrkoping, Linkoping, Landskrona, Orebro, Malmo, and the state capital Stockholm. The incident took place on the special occasion of Easter, which is celebrated in the country.

The clash started after the leader of the anti-immigration and anti-Islam group StramKurs who is the Danish-Swedish politician RasmusPaludan declared a "tour" to Sweden to burn the Quran; according to him, this month marks the holy festival, Ramadan. The party was formed in 2017, and according to its website, they state that StramKurs is Denmark's foremost loyal political party. We are because we know that as a Danish political party, we should always put the welfare of Danes ahead of the happiness of others. It should be a strong view for any Danish political party, but we are the only one who believes so.

Sweden is a country of liberal freedom of speech, due to which the country's police had to permit the entry of Paludan.

The entry of Paludan opposed the country's public as on Saturday, he addressed a rally in Malmo where the protestors threw stones at him, and the leader of the anti-Islamic community got injured. Afterward, to disseminate the crowd in the city of Norrkoping, police fired gunshots of which three protestors were wounded.

Many Islamic countries have shown anger at the decision to allow Paludan to enter the country. As Iraq's foreign minister said, "due to the decision, Sweden and the country's Muslim community can face serious repercussions following harming another country's sovereignty."

According to Justice Minister Morgan Johansson, "living in a democratic country with freedom of speech and the press is a thing to be proud of.'' He also admitted that the freedom had been used negatively to create hate, disharmony, and violence by the extremist.

Paludan had earlier burnt the Quran in 2019, of which around 100 people started protesting against him, and he faced various repercussions for doing that. He was also arrested in France in 2020 for planning to burn the holy book Quran. He was granted citizenship in Sweden as his father was a citizen of the country.

The tense relationship has increased the sensitivity in the country. Police reported that the people suspected in the riots belonged to the criminal gangs as the rioters were hurting the police and trying to kill them instead of the Paludan group.

Paludan, 40 years old, had done this stunt back in 2020 in Denmark there. Also, he was seen tossing the Quran in the air, using derogatory words against the Muslim community in the large immigrant population.

According to experts, the development of radicals like Paludan must is considered part of hardening attitudes toward immigrants in Denmark and Sweden during the 2015 and 2016 refugees problem, when over a million individuals from Africa and the Middle East fled to Europe.

Former US President Donald Trump framed a controversial remark about Sweden in 2017 at a campaign-style event, claiming that Sweden's history of embracing immigrants was the basis of a horrific incident that never occurred.

The outcry against immigration had empowered the increase in the right-wing community, with the main parties scooping up far-right talking points and bringing a more complex approach to migrants. The many significant parties adopted the right-wing Danish people's party's anti-immigration program on the left and right in Denmark's 2019 elections.

The right Sweden democratic politicians, a quasi anti-immigration political party, are vying for the position in the forthcoming elections to be held in September. The party mainly focuses on those who have been provided haven in Sweden for a couple of years to leave the country and further declares Islam's community the most significant threat to the nation.

The right-wing anti-Islam party urged to ban Islam and targeted mainly the Muslim society of Denmark. The party was accused of some distorted techniques to expand its political agenda through the Danish voting system, which the party was banned until 2022. In 2019, the party also participated in the general elections but couldn't get good limelight and support, but they gained only 1.8% of the vote.

Paludan had also planned to contest in the upcoming elections, which will be held in September in Sweden, as he holds Denmark and Sweden citizenship. However, to secure his seat, he still needs to earn more signatures.

Sweden's Islam population is near about 6% and it is expected that it can get 31% by 2050, as the country also accepts immigrants from all over the world. The number of Islam people in the country is adding more superiority over other religions as after Christianity, Islam consists of the second largest population.

Every riot becomes a religious agenda when rioters' only goal is to spread hatred and violence. When one community's population increases say, if the Islam population is increasing in Sweden in such scenario violence becomes quite predictable because there are groups in every community who spread hatred as everyone wants to lead the country and the world which can be successfully planned by hurting emotional sentiments.

Prime Minister Magdalena Anderson said that she would arrest all those involved in the riots to create hatred and added that Paludan views and ideology aren't supported but reiterating violence is also not supported.

It is observed that what lies ahead for Sweden as a country like this needs much unity and harmony. Paludan's upcoming events will unveil the reality of the forthcoming elections. It can be understood whether it was just a hysteria to gain an image or the ideology of the Muslim community.