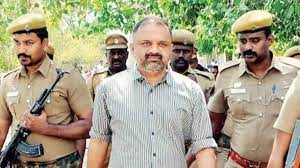 The Supreme court granted bail for Rajiv Gandhi's assassination of convict Perarivalan after 32 years of incarceration. The former Prime Minister was assassinated during an election campaign at Sriperumbudur in Tamil Nadu on the 21st of May 1991. Perarivalan alias Arivu, one of the seven prime convicts of the case, was arrested in June 1991. The bail was granted by the Justices L Nageswara Rao and B R Gavai. The court observed the bail because the convict presented a clean record of behavior and good conduct during his three decades of life in prison.

Perarivalan was accused of supplying two 9 volt battery cells for the belt bomb employed for the attack. When arrested, he was only 19 years old. He, including the rest of the convicts, was awarded a death sentence by the Supreme court in 1999. But the case found a new turn in 2014, when V Thyagaraja, to Superintendent of Central Bureau of Investigation(CBI) made a revelation that he had altered Perarivalan’s confession. He said that he had made certain additions to what was recorded to be the confession statement that awarded the convict a death sentence. Following that, the death sentence got reduced to life imprisonment.

The bail was also a result of Perarivalan’s long-term legal battle. He had applied a mercy petition before the Tamil Nadu governor, under Article 161, back in 2015. Despite the pressure of several bodies, including the Tamil Nadu government, the Governor restrained from taking any action for a long time. Therefore, the convict had approached the top court for an early resolution. Perarivalan has been on parole for the last ten months. He had been on parole thrice before.

The central government had opposed Perarivalan’s plea for release, stating that he had received a reduction in a sentence when his death sentence got reduced to a life term. The court has also ordered Perarivalan to report to the local police station at Jolarpettai during the first week of every month.

Rajiv Gandhi, the 6th Prime Minister of India, was assassinated in a bomb blast during an election campaign in Tamil Nadu. A member of the radical group Liberation Tigers of Tamil Eelam (LTTE) detonated a belt bomb right in front of Gandhi, leading to a powerful explosion that killed the former PM along with 14 others on the spot. The human bomb identified as Thenmozhi Rajaratnam known as Dhanu had the bomb attached to her waist pretended to touch the feet of Rajiv Gandhi as an admirer before she detonated the bomb. The incident was the biggest shock in the wake of the decade.

The seven people arrested regarding the case were Nalini, M Ravichandran, Santhan, Robert Payas, Jayakumar, Murugan, and A G Perarivalan, some of them are Srilankan nationals. The bomber Dhanu was killed during the incident and Sivarasan, the mastermind of the murder plan, had shot himself dead in the outskirts of Bengaluru city. No assassins or key conspirators were caught alive by the police. The convicted people were caught as they were associated with the incident in some way or the other.

The incidents that led to the murder were rooted in Sri Lanka back in the late 1980s. During the 80s, Srilanka was under the severe crisis of civil war. The Indian government under Rajiv Gandhi intervened in the incident for peacemaking and inducted Indian commandos under IPKF or Indian Peace Keeping force in the country. The intervention of India was a huge backlash for the motives of LTTE in the war. It created a wide resentment throughout the group against the Indian Prime Minister.

Later in 1991, Rajiv Gandhi was once again being selected for another tenure of power as the PM of India. This feared the LTTE in Sri Lanka that there would be a possible re-induction of IPKF in the country and also at the same time their movements within the Tamil communities in India’s Tamil Nadu. This led to Veluppillai Prabhakaran’s and his follower's decision to eliminate the congress leader physically.

As the elections were approaching, plans were laid in the jungles of Jaffna and were carried across the Pak strait to Chennai, then Madras. On the 21st of May 1991, Rajiv Gandhi arrived at Madras by night and visited a few venues before heading to Sriperumbudur, where he was assassinated at 10 PM. 14 people were killed on the night including the PM and the bomber along with several seriously injured.

The assassination left a brutal mark in the political history of India. It leads to the gradual ruin of the organization LTTE. There were reported security lapses that made way for the execution of the act. The public program involving a high-profile VIP was conducted in open ground, and the followers gathered had very close access to the former prime minister on the ground. The family of Rajiv Gandhi had said that they had pardoned all the sinners associated with the murder.

Perarivalan’s mother Arputham Ammal had caught the attention and highlighted her long battle against her son’s punishment. She is one of the strong voices against capital punishment in India. She expressed her happiness in the court's verdict along with Political Parties in Tamil Nadu, who also welcomed the court order. The court also observed his bail because also completed several educational courses during his time of imprisonment and also his ill health. The Tamil Nadu government recently had made a few attempts to make requests for releasing all the seven convicted people in the incident. On the basis, the new Supreme court verdict on bail for Perarivalan is a remarkable follow-up.