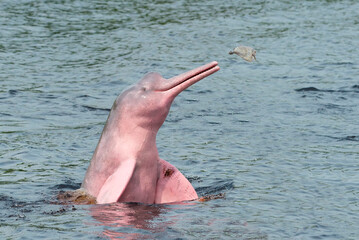 The Amazon River or Boto dolphin is quite an interesting creature. They are known for their pearly pink skin, mostly caused by scarring, and are the largest river dolphin species.

They are, also, the smartest species of river dolphin. SeaWorld Parks and Entertainment states that previously, these dolphins were considered sacred because it was believed they had supernatural powers. If the name is not obvious enough, they live in freshwater only.

This stunning freshwater mammal faces extinction due to numerous infrastructural development plans being put into action in the Amazon. One of these includes the development of hydroelectricity in the Amazon to meet the increasing electricity demand. This means that the construction of dams will be growing exponentially. This hurts the Boto dolphins because these constructions will separate the dolphins from their prey.

Pollution is another major threat to Amazon River dolphins. According to World Wildlife, mercury is used in gold-mining activities, which gets into the water and is ingested by fish, which are then eaten by the dolphins, poisoning them. This is also damaging other parts of the ecosystem. SeaWorld Parks and Entertainment says that pesticides and pollution from paper milling also enter the river basins and lakes. This is a critical problem as it affects animals as well as the flora.

Unbeknownst to many, river dolphins are regularly killed and used as fish bait. It is ironic how the fish hunter has become fish food. Tragically, these animals are also killed for culinary purposes; seen as a delicacy by many. Piscators in the Amazon see the Botos as rivals and try to eliminate them to have more fish to themselves. The same piscators’ fishing nets cause the dolphins to become intertwined with the nets, causing the dolphins to drown. Sometimes, the dolphins also destroy the fishing nets which anger the fishermen, and you can guess what they do as “punishment”.

Mark Abadi wrote on Business Insider Today that the Botos are critically endangered. He exposes the lifting of the catfish fishing ban. This provided relief for the poaching the dolphins had to endure; a comfort they no longer have. Abadi also stated that growing the population of the Botos is extremely difficult as they have a time-consuming gestation period of 13 months and a 2-year nursing period. This means that the females only procreate after 3 to 5 years.

It has become an urgent concern to contribute to saving such a unique animal. For instance, educational messaging on social media is one of the first and most effective strategies and animal-rescue organisations can benefit from press political leaders making major decisions concerning the protection of the Botos’ freshwater homes. We all belong to a process and have a role to play in the ecosystem. Breaking this chain can be catastrophic. Save the Boto.