Russia-Ukraine and the Information War: the Spread of Kremlin Narratives in Africa 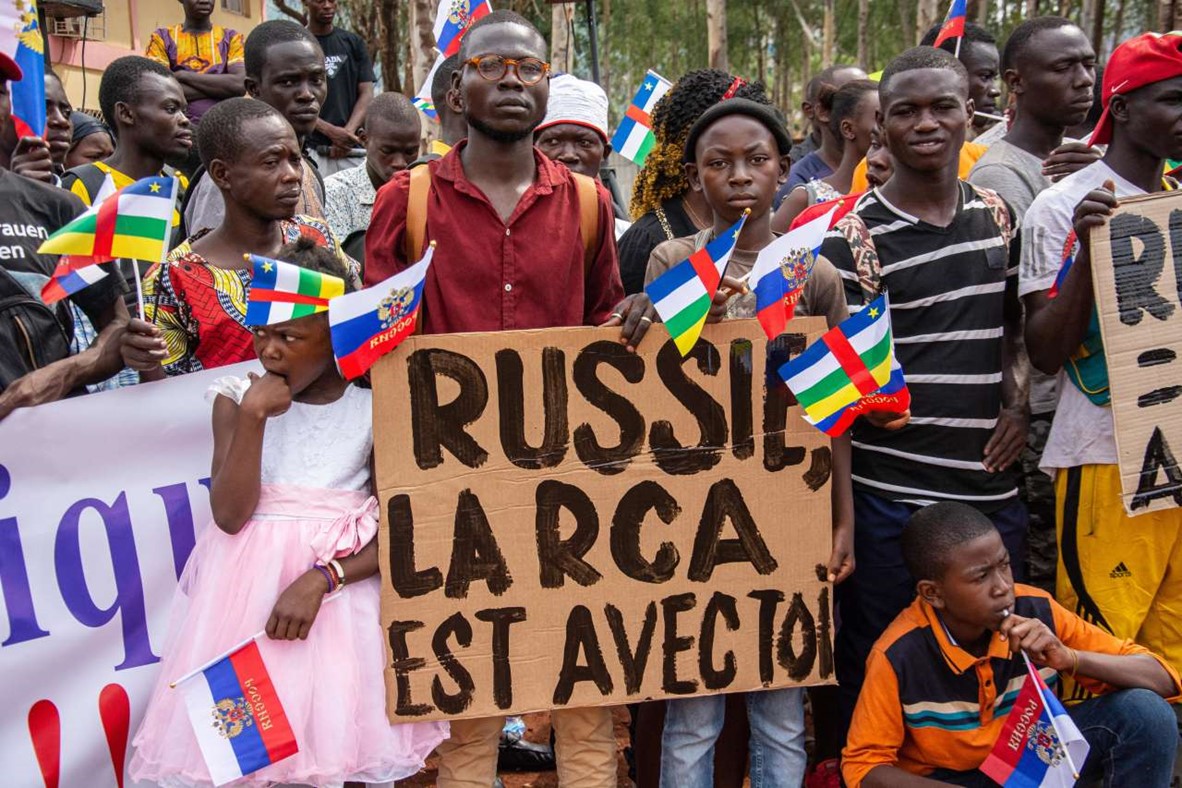 In recent years, especially since the annexation of Crimea in 2014 and the international sanctions that ensued, Moscow has shown growing aggressivity regarding its expansion strategy in the African continent. By providing military and financial support to countries in quest of independence from the historical Western yoke, and by establishing solid trade relationships with African countries, Russia has found both partners and allies. Indeed, according to the African Export – Import Bank, trade between Russia has doubled since 2015 to reach 20 billion dollars in 2021. Africa has thus become very dependent on agricultural imports, with 32% of its cereal imports between 2018 and 2020 coming from Russia. Moreover, many countries such as Mali, Sudan, or Central African Republic (CAR) have relied for some years now on Wagner mercenaries and Russian paramilitary presence to maintain protection and security in unstable and fractured political landscapes. 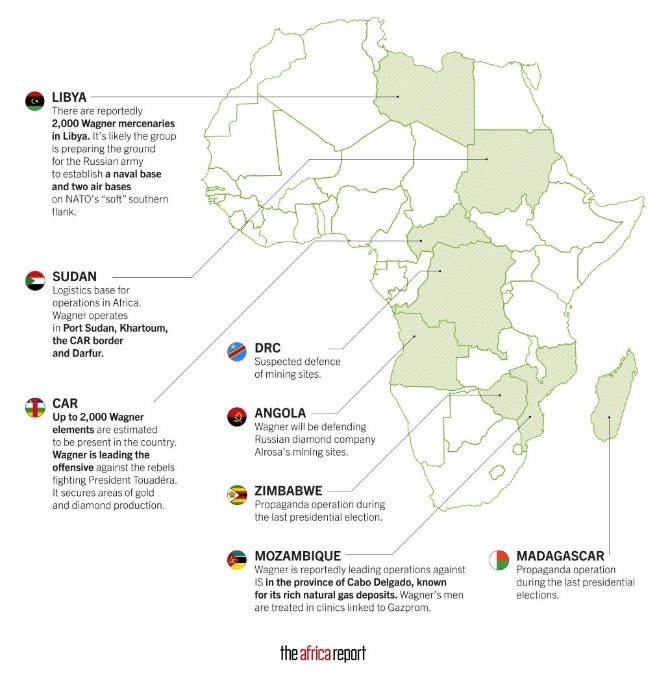 Wagner mecenary presence in Africa in 2021

The recent outbreak of the Ukrainian war and France’s troops’ removal in the Sahel accentuated pro-Russian movements and led African countries to turn away from Western influence. Moscow thus took advantage of the power vacuum left by ex-colonial powers such as France to establish its presence and surfed on anti-Western sentiment to consolidate its soft power throughout the continent.

This strong relationship between Russia and Africa explains why Putin has benefited from such wide support from African countries amidst its invasion of Ukraine. Indeed, the idea that Ukraine is winning the information war and worldwide popular support remains nothing but a Western narrative. On March 2nd, during the UN vote condemning Russia for the invasion, out of 54 African countries eight did not vote, 17 abstained, and Eritrea voted against. While largely condemned by the West for its actions in Ukraine, Moscow is benefitting from its recent policies of influence in Africa, getting full support from many African leaders. Moreover, in the battle of influence in Africa, Russia has a strong advantage: it is not a colonial power. As Kemi Seba, a powerful figure of Pan-Africanism, stated: “[Putin] does not have the blood of slavery and colonisation on his hands”. This anti-colonial rhetoric is omnipresent in the public debate and explains its share of Russia’s popularity in African countries: accepting support from Moscow is also engaging in an emancipation process from Western domination.

In the context of the Ukraine war, manifestations of support to the Kremlin have thus spread throughout the continent. Britannic researcher Carl Miller has also detected the wide presence on social media of two hashtags: #IStandWithRussia and #IStandWithPutin. “The fact that we don’t see information warfare doesn’t mean it isn’t happening, and it doesn’t mean we’ve won. It might just mean that ours is not the battleground on which it’s being fought”. Not only in Africa, but in Asia and BRICS is the winner of information warfare in the Russian invasion of Ukraine not so evident.

CAR for instance; during a gathering in Bangui on March 5th, Brice Plegba, a participant, declared: “We came to support Russia who restored peace in our country”. This narrative of Russia as a provider of peace and protection in CAR has been well nurtured by both national and Russian authorities through elaborate propaganda. For example, the movie “Tourist”, released in 2021, was a Russian-CAR production aimed at enhancing the image of Russian heroes who freed the country of 3R rebels. Russians appear as heroes, respectful of international law. Despite exactions on civilians by mercenaries revealed by the Humans Right Watch in the country, the Kremlin narrative thus remains strong: propaganda is powerful, plaintiffs are silenced, but most importantly, Russia’s is, as of now, the best alternative there is to maintain order in a country failed by the French. 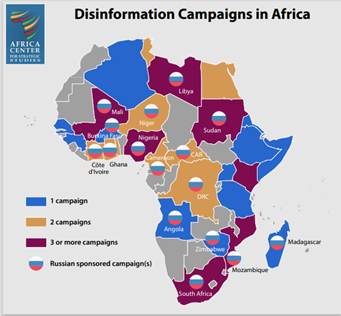 Disinformation campaigns in Africa in 2022

By providing security, establishing its soft power and influence, and creating a dependence on imports, Moscow has managed to secure the support of African leaders. Indeed, Macky Sall, Senegalese leader of the African Union (AU), warns of the price shock and food crisis that could result from Western sanctions on Russian food exports, a divergence with the West that contributes to driving Africa towards its Russian partner. One of the immediate effects of this rapprochement is that many African countries can represent sources of fighters for Russia, which has struggled to mobilise military personnel. Putin placed his pawns and is now reaping the rewards as Zelensky struggles to gain sympathy in a continent where Russian interests prevail. However, both Zelensky’s and Putin’s démarches with AU set new benchmarks on the geopolitical chessboard: rarely have we seen Africa’s position in a conflict given such relevance. This could signify a turning point in International Relations, where Africa would become a serious strategic ally in terms of global security dynamics.