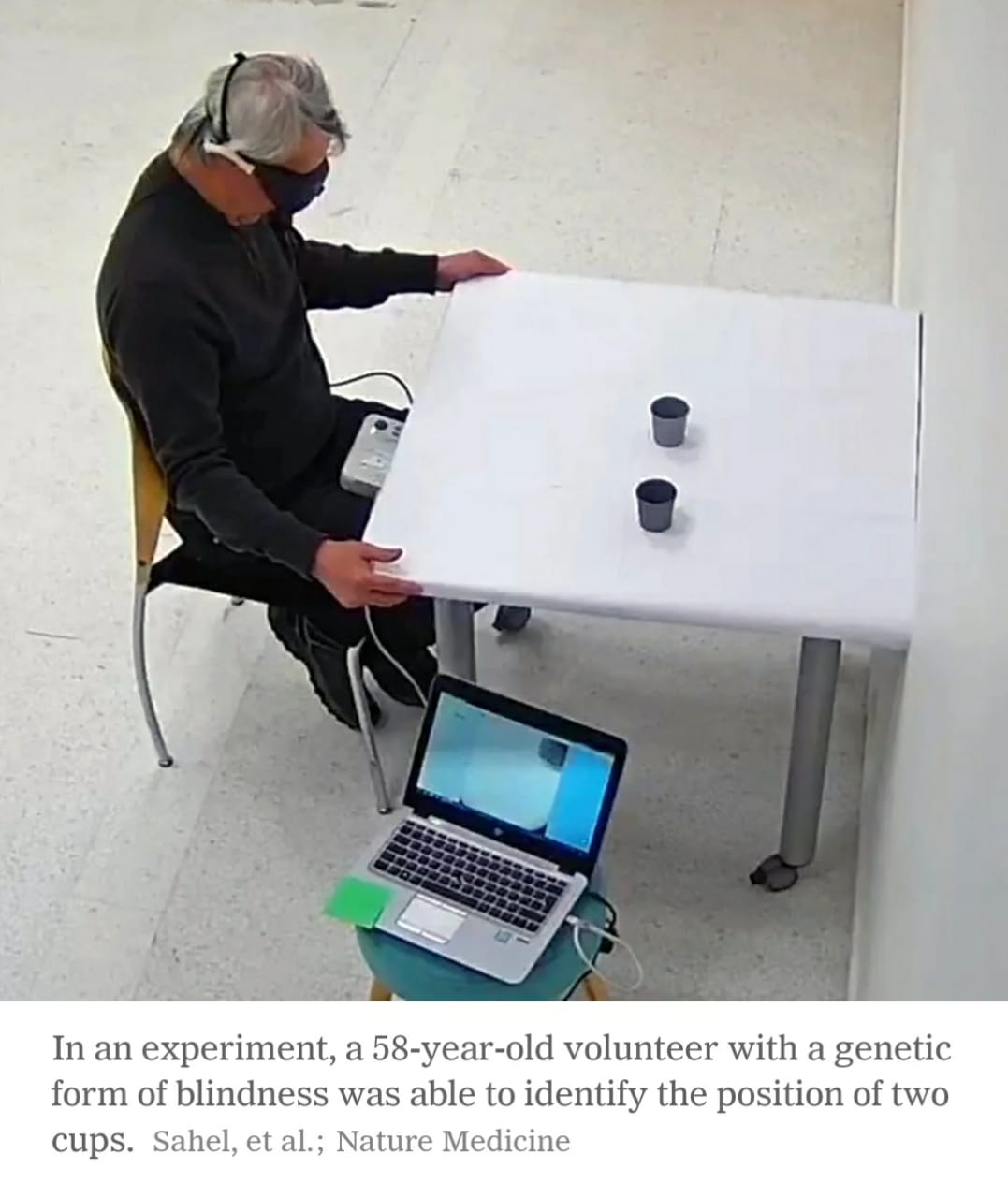 In a first, scientists have been able to restore partial sight in a blind man using optogenetic therapy. The method involved injections in his eye and months of light simulation via light-emitting goggles. During the clinical trials, the patient was able to perceive, locate, count and touch different objects by wearing the goggles. The patient could not perform any visual task without the goggles.

This is the first reported case of partial vision restoration in a neurodegenerative disease after performing the Optogenetic Therapy according to the results of a pathbreaking study named "Nature Medicine" published on Monday(24 May 2021).

Scientists in Europe and the U.S. performed clinical trials using optogenetic techniques on a man who had lost his vision due to an inherited photoreceptor disease 40 years ago. They injected the blind patient with combined intraocular injection of an adeno-associated viral vector encoding ChrimsonR with light stimulation through engineered goggles, which projected corresponding light pulses onto the retina in real-time.

In a clinical trailblazer, scientists were able to restore partial vision for the 58-year old patient. He could recognise, count, locate and touch different objects laid out on a table in front of him. It was a collaborative effort between the scientists of the Vision Institute in Paris led by Jose Sahel, Botond Rosa, Director IOB as well as scientists at GenSight. This combined work culminated in restoring some visual functions in a blind patient with Retinitis Pigmentosa.

In the words of the American Academy of Opthalmology, Retinitis pigmentosa changes how the retina responds to light, making it hard to see, and people with the condition lose their vision slowly over time.

Botond Rosa, who also co-authored the study published in the journal Nature Research Journals shared his plans on bringing optogenetic restoration from lab to clinic. He states that "At IOB which is the Insititute of Molecular and Clinical Opthalmology Basel, we work on the next generation of optogenetic vision restoration. We start with basic research, then technology passes to translational research and finally ends up in the hands of our clinicians who are performing clinical trials with the leadership of Hendrik Scholl."

Blindness is a major problem in our society. Globally, nearly 2.2 billion suffer from a distance or near visual impairment. Out of these 1 billion or at least half of the cases, visual impairment could have been circumvented or is yet to be addressed. People aged 50 years or above are more likely to be affected with visual impairment and blindness. However, vision loss can affect people of all age groups.

As per WHO, a large number of eye diseases can be prevented and cured (e.g. infections, trauma, unsafe traditional medicines, perinatal diseases, nutrition-related diseases, unsafe use or self-administration of topical treatment) but this is not possible en bloc. Annual estimated global costs of productivity losses associated with vision impairment from uncorrected myopia and presbyopia alone are estimated to be around US$ 244 billion and US$ 25.4 billion. Therefore, this partial vision restoration is a significant breakthrough paving the way for an eyeful world.

A report in the New York Times suggests, "In the early 2000s, neuroscientists figured out how to install some of these proteins into the brain cells of mice and other lab animals by injecting viruses carrying their genes. The viruses infected certain types of brain cells, which then used the new gene to build light-sensitive channels."

Scientists are working on more clinical trials to explore the possibility of vision restoration before using optogenetics for long term treatment.