Shelling by Assad forces in Syria has forced 5,000 civilians to escape 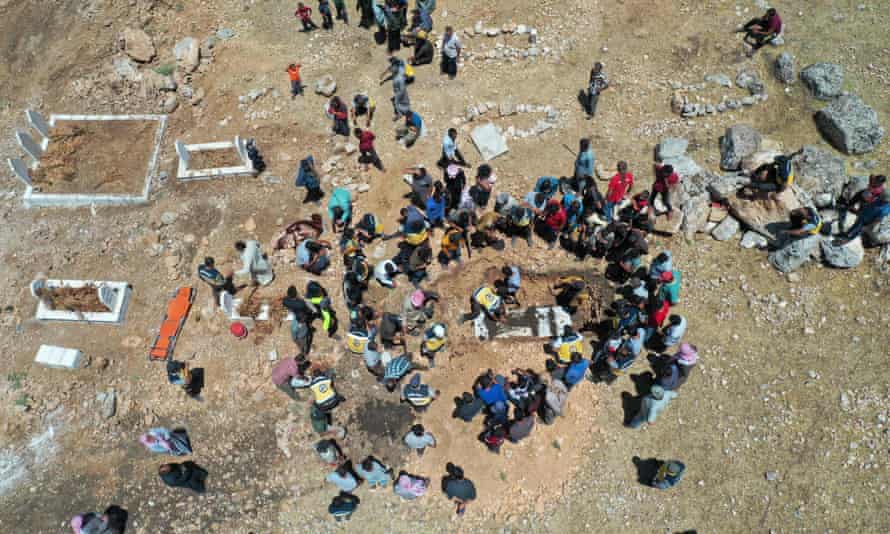 According to a local relief group, more government onslaughts and targeting the contested area have caused 5,000 residents to evacuate their homes in Syria's northwest. Since the beginning of June, at least 31 people have died due to Bashar al-army Assad's shelling of residential structures in southern Idlib province. A hospital, a displacement camp school, and a White Helmets headquarters were among the buildings.

Three children and a civil defense worker were among those murdered in an attack on the town of Qastoun on Saturday.

“Our center was hit, with three acute destructive missiles as we were getting set to start our morning shift. I joined the White Helmets [a civil defense paramedic organization] in 2014 and haven't seen such devastating rockets throughout that time.

Our comrade, Dahham al-Hussein, was slain, and five of our volunteers, including Dahham's brother Ahmad, were injured,” claimed Samer Nassar, the group's Qastoun center's leader. “We lost a lot of equipment that we used to save lives and retrieve individuals from beneath rubble since the center was destroyed.”

The recent bloodshed is the latest breach of a March 2020 ceasefire agreement mediated by Turkey and Russia, which saved the region from a devastating government onslaught that drove one million people to escape. “People are frightened enough about having to leave their houses again... they are also worried about approaching soldiers on the ground seizing their villages,” Rima Hallabi, a 21-year-old student, said. “There's nowhere to go.” Idlib would not be able to manage large numbers of people leaving once more.”

Hayat Tahrir al-Sham, or HTS, is an Islamist organization that gained control of Idlib and the surrounding area from other rebel forces in 2019.

After ten years of conflict, this is the only enclave of Syria that is not under the regime's control. It is home to around 3.5 million people, with approximately three-quarters of them fleeing conflict in other areas of the nation. Living circumstances are dreadful, and they have become worse since the Syrian currency collapsed last year, sending food costs skyrocketing.

According to UN organizations, almost 75% of the population is now reliant on help to satisfy necessities.

The current combat has centered on the towns of Ehsim and Barah, on the southern outskirts of Idlib, where Syrian government forces launched hundreds of artillery bombs over the weekend, killing at least nine people.

A local HTS leader was among the deceased, according to Taher al-Omar, an opposition activist. According to the state news agency Sana, militants bombarded the government-held hamlet of Joreen, killing a child. “June has brought several assaults on civilian houses and structures, putting a lot of pressure on our hospitals, which are already struggling,” said Salem Abdan, Idlib's health director.

The current uptick in attacks, along with the impending [UN Security Council decision on cross-border aid], poses a danger to the health and humanitarian sectors.” On July 10, the United Nations will vote on whether to renew the authorization for assistance delivery to northwestern Syria across the Turkish border.

Closing the final direct humanitarian channel would jeopardize the lives of millions of civilians in Idlib, but Russia has vowed to use its veto authority to halt any UN cross-border aid to opposition regions, claiming that it must instead be handled, via its Syrian government partners.

“The international community must stand behind us, and aid over the Turkish border must continue,” Abdan said. “Why would [Damascus] allow the passage of any medicine or help if they are already bombing us?”

At least 18 people were murdered over the weekend in the northwestern town of Afrin after two separate artillery assaults blamed by the Syrian offshoot of the Kurdistan Workers' Party (PKK) struck a residential neighborhood and a hospital.

Kurdish troops controlled Afrin until the Turkish army and Turkish-backed Syrian rebels captured it in early 2018. Kurdish militias were not responsible for the assaults, according to the Syrian Democratic Troops (SDF), a US-backed umbrella group of mostly Kurdish forces fighting in Syria.