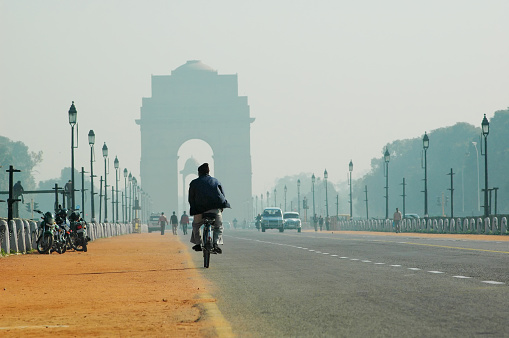 According to the System of Air Quality and Weather Forecasting And Research (SAFER),
the total current air quality index (AQI)stands at 290.

On Sunday morning the air quality index in Noida stands at 283 while in Guru gram it stands at 308 as reported by officials.

After seeing an improvement in the AQI of Delhi though schools from classes 6th onwards were reopened by the Delhi government on Saturday, the construction activities are still exempted till further orders by the Delhi Government.

The Commission for Air Quality Management (CAQM) has allowed a few projects of railways, airports, interstate bus terminals and healthcare facilities of national importance due to the toxic air quality. Few other projects involve hospitals, nursing homes, linear public projects like highways, flyovers, over bridges though they are exempted but still have to strictly abide by the directions issued by the commission.

” While the Commission's restrictions are still in force to control air pollution from two other major sectors contributing to air pollution namely industries and transport, it is both advisable and desirable to follow a phased approach in respect of the construction sector also considering the air quality in NCR," the CAQM order said.

Every year around November the AQI increases at a rapid rate, leading to poor air quality. The poor AQI in Delhi causes extreme breathing problems among the children and elderly.