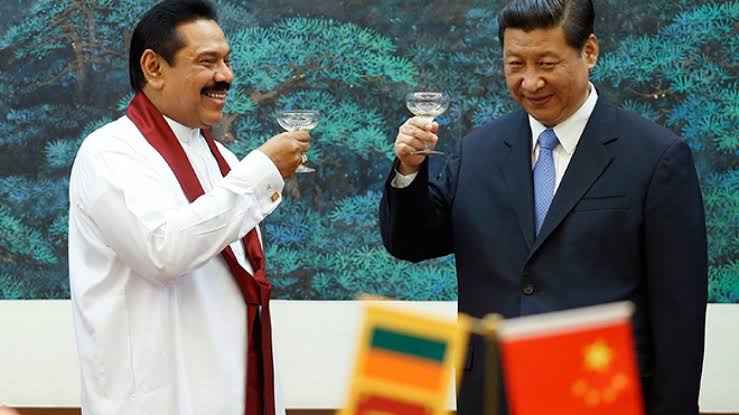 Sri Lanka is in the midst of a deep economic and financial crisis with fears that it can go bankrupt in 2022. Inflation has reached 11℅ with the prices of essential commodities becoming unaffordable for many Sri Lankans. The Rajapaksa Government has declared an economic emergency giving powers to the military to enforce price controls and raid businesses and warehouses to prevent alleged hoarding to relieve short supplies and stabilize the prices. The government has also banned exports to curb shortages further worsening the problem and restricted imports to stop capital outflows.

According to the World Bank, 5 lakh Sri Lankans have fallen below the poverty line since the beginning of the pandemic, which has been estimated as the reversal of 5 years of gain in combating poverty. According to official statistics, the economy has shrunk by 3.6℅.

The Economic crisis in Sri Lanka has been pinned on several factors – the absence of tourism and remittances revenue because of the pandemic, vast government spending and tax cuts which has depleted the state coffers, burgeoning foreign debt payments, and others.

In November last year, Foreign Exchange Reserves were reported to be around $1.6 billion, the lowest in a decade making it difficult for the government to import items to curb domestic shortages. The Central Bank of Sri Lanka recently reported its foreign exchange reserves to be around $3.1 billion which included a $1.5 billion Chinese currency swap. The government has assured that it is confident of its ability to repay its obligations on time.

One of the biggest problems of Sri Lanka is its foreign debt. Almost half of its foreign debt had been raised through market borrowings through international sovereign bonds. It owes China $5 billion in debt and took an additional $1 billion from Beijing last year. Its relationship with China has been largely a debt-ridden one with the former investing huge amounts in the island country as part of its Belt and Road Initiative. The Sri Lankan government had to lease out the Hambantota Port to a Chinese state-run firm for a lease of 99 years as a debt swap amounting to $1.2 billion. Recently, in the context of the Chinese Foreign Minister’s visit to Colombo, the office of the Sri Lankan President stated that it would be a great relief if Sri Lanka’s debt payments could be rescheduled. Many credit rating agencies have downgraded Sri Lanka’s credit worthiness making it difficult for the island country to borrow further.

The government is expected to pay a $500 million international sovereign bond payment this month. In the next 12 months, both the private sector and government are required to repay around $7 billion in domestic and foreign loans. However, with such low foreign exchange reserves many doubt Sri Lanka will be able to meet its repayments on time and fear that it may default. The situation has been further exacerbated by currency devaluation with the currency losing 20℅ of its value compared to the dollar since 2019 forcing the Central Bank to raise interest rates to shore up the falling currency. Government measures to pay off debts by printing more money have only contributed to increasing the inflation rate and further destroying the currency.

The tourism sector in Sri Lanka contributes to around 10℅ of the GDP. But in the wake of the pandemic-induced lockdowns since the past 2 years, thousands of jobs have been lost in the sector impoverishing people. The tourism sector brought in about $3-$5 billion in revenue to the island country in the pre-pandemic period. Till July 2021, Sri Lanka witnessed only around 19,000 tourists, 1℅ of the 2.3 million tourists that usually visited the island country pre-pandemic.

The country is also a huge exporter of goods like spices, tea, and others. However, an abrupt government policy to ban the use of inorganic fertilizers and pesticides to push domestic agricultural production to go organic backfired. Farmers, hesitant that they won’t be able to buy expensive organic materials and reap a profit didn’t invest shortening domestic supplies. The government rolled back its decision but farmers are still suffering its impact. Sri Lanka imports around $250 million of fertilizers every year.

To tide over this crisis, many have suggested the Sri Lankan government negotiate an IMF program. But, the Rajapaksa government has rejected it saying it won’t be necessary. IMF loans come with strict conditionality like transparency on where and how the money is being spent and austerity measures. Measures like debt restructuring and mobilizing bridging finance for the interim to tide over the immediate crisis are being suggested. The government rolled out a $1.2 billion relief package and is now reaching out to India for an emergency credit line to import essentials as well as expensive short-term currency swaps with other countries.

The Sri Lanka government also has been running huge budget deficits for the past 2 decades. In 2020, the budget deficit was 1.6 trillion Sri Lankan Rupees reaching 11.2℅ of the GDP, almost doubling from its average of 6℅ since the last few years. The debt to GDP ratio is 102℅ and is expected to reach around 108℅ by 2022. The government also loses billions in loss-making state-run enterprises.

The situation has been exacerbated by large government expenditures and low tax revenues. The Rajapaksa Government, immediately after assuming office introduced a new tax regime abolishing the Pay As You Earn Taxes, reduction in corporate and value-added taxes which reduced the government's tax revenues by some 560 billion Sri Lankan Rupees. The government after a significant loss of tax base wasn’t able to mobilize state resources effectively to respond to the pandemic thus, faltering its response and prolonging the health crisis.