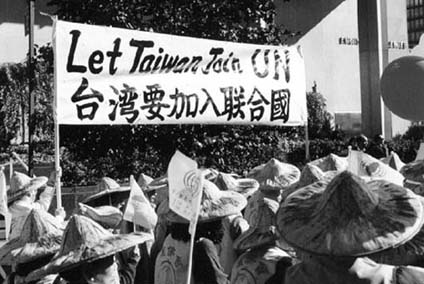 Fifty years after its exit, Taiwan, formally known as the Republic of China has once again returned at the doors of the UN seeking readmission. There is, however, one

obstacle standing between them and success; China.

Taiwan has remained isolated from international forums for the past decade. In 2013, it was expelled from the International Civil Aviation Organization, while in 2016, it lost its observer status at UN-affiliated bodies such as World Health Organization (WHO).

US Secretary of State Antony Blinken had earlier expressed regret over Taiwan's forced absence from the world stage. Furthermore, he encouraged all member states to support the nation in its endeavor to expand international participation. Taiwan President Tsai Ing-wen appreciated the US support.

Why was Taiwan expelled from the UN?

The de facto independent nation was formally expelled from the United Nations based on a consensus from the General Assembly and was replaced by the People's Republic of China (PRC) in 1949. The Communist Party established a powerful regime and yielded supremacy over Beijing at the end of the country’s civil car. The Republic of China (ROC) was forced into exile with millions of other citizens and found refuge on the island of Taiwan.

Nevertheless, Taiwan didn’t remain completely cut off. Fearing the spread of communism to the west, the US extended a hand of assistance to the Taiwanese. Like many other countries, the US too upholds a policy of “strategic ambiguity” with the island nation under the Taiwanese Relations Act of 1979. President Joe Bidens' recent remarks of protecting the country from Chinese invasions sent shockwaves around the world.

The ROC had promised a return to the UN in the 1970s. However, it didn’t have the credibility and qualifications to earn a separate membership at the UN since it no longer represented the millions of citizens that lived under the regime of the PRC.

Since its democratic transition in the 1990s, Taiwan has increasingly started to see itself as an independent state rather than a province of China. The majority of its citizens, identify themselves as Taiwanese and not Chinese.

Margaret Lewis of Seton Hall University Law School, questions China’s claim over Taiwan and believes the superpower is sparing no effort to silence the democratic island nation from the world. Taiwan is only barred from acquiring a representative membership under Resolution 2758, but its claims for increased participation in the organization would seem to be in line with the spirit of the resolution, she added.

Since its adoption in 1971, UN Resolution 2758 has remained a crucial document in Taiwan’s political history. Known as the "Resolution on Admitting Peking," it secured PROC's position as China's sole representative in international organizations such as the UN. China defends its claims against representation from Taiwan by calling it a province under PROC. “The United Nations is an international governmental organization composed of sovereign states. Taiwan is a part of China,” a spokesperson

for the Taiwan Affairs Office in Beijing told reporters.

Chinese authorities in Beijing reiterated their interpretation of Resolution 2758 during the weekend - that they recognize "one China" and the government in Beijing as the sole representative of the entire country.

Although freeing itself from the legacy of the ROC government might seem like a plausible way out for Taiwan, it would result in a military conflict with China as the nation would be recognized as a breakaway province. Hence, a majority of the Taiwanese population feels at ease with their current political status.

Will Taiwan be successful in its pursuit of readmission?

The UN has often displayed difficulties in recognizing exiled governments. These days it deliberates over recognizing and offering observer status to the Taliban regime in Afghanistan. Due to its complex relations with China, Taiwan is currently unable to register itself under the name of the “Republic of Taiwan.”

However, in recent times, Taiwan has displayed splendid work when it comes to handling the COVID-19 crisis which has elevated its status in the eyes of organizations such as the WHO even securing the commendation of the powerful G7 nations to have a seat at the table. Its work has also enabled the country to cement diplomatic relationships with many European nations. However, the Chinese government has warned all countries who are attempting to establish relations with its “province.”

For the moment, however, China's presence at the UN General Assembly means that Taiwan will not be able to come in from the cold.