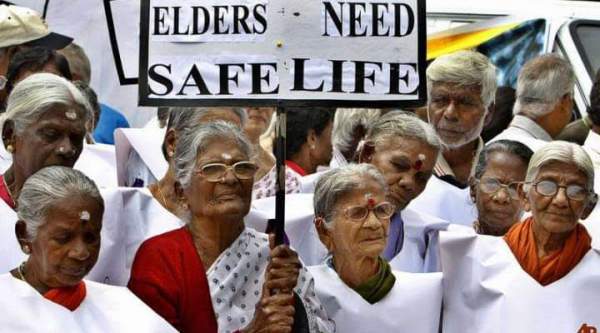 Humanity has learned the natural concept of ‘advantage’ from phenomena like natural selection, the food chain, the survival of the fittest, and evolution. They have created their conceptions based on what they have learned, such as giving a boy child more than a girl child since he'll stay at home and provide for the family, and reservations based on the caste system, which has adopted the quality-over-advantage mentality. They do not have any written rules about what or how life has to be lived, and they do not know whether the concepts of emotion, advantage, or something else should guide them. Another concept is how humanity has bent natural law with the construct of the family. There are no other species except for Cetaceans (Whales), Pachyderms (Elephants), and some wild dogs, who look after the elderly after a certain amount of time. Let us look at the case of our nearest predecessors, the gorillas. A silverback, at some point, will be challenged and overthrown by one of his sons. And when it becomes too weak for more action, it will wander off by itself and die. This caring behavior has shown its limitations too. When the pack is not in an area with enough food and water and the ailing members who the packs are taking care of are too weak to keep up, they abandon them for the sake of the majority. The term and concept ‘parents’ are human-made and only belong, in their sense, among humans. This is because of the human concept of considering himself at the center of the universe rather than being just one insignificant among the million life forms in homes.

Thalaikoothal, in its native tongue, translates into "leisurely oil bath", and transforms into "the oil bath of death", because, for various reasons, that is unacceptable in a harmonious society that protects its weaker members.

The Bath of Death

Thalaikoothal is a form of senicide that is still carried out in several villages around Tamil Nadu. Places like the Arippukotte Taluk, Lakshmipuram and Mandapashala, etc., of the Virudhanagar district, are some of the recognized hotspots. The elderly in families, when they become a liability, is ceremonially put to death using various methods, of which the iconic practice of Thalaikoothal, the ‘leisurely oil bath', is a key. When an elderly member of the community is unable to provide for their own needs (especially for food and medicine), he or she becomes a liability where the family has to make a hard decision. For generations, the practice of Thalaikoothal has been active among these communities, regardless of their caste or economic status. 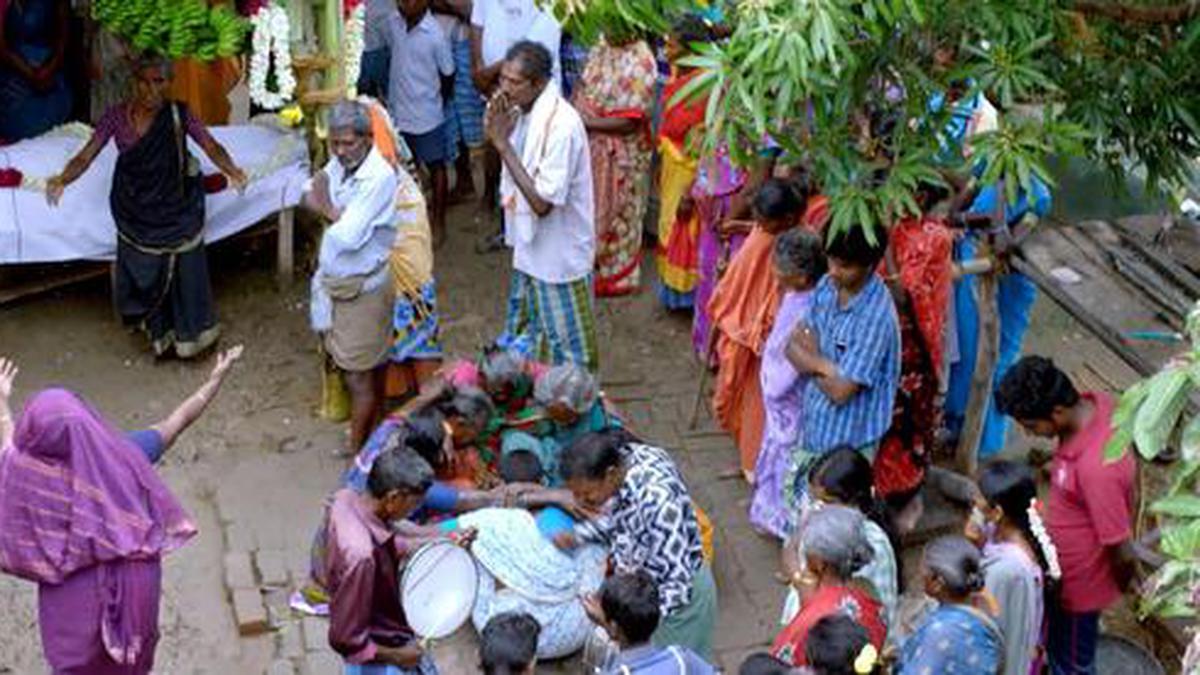 The person is made to take a cold shower during the final hours of sunset when the temperature drops quickly. He/she is then made to drink large amounts of tender coconut water. As the human body ages, it loses its capacity to maintain body temperatures and, this leads to a fever that lasts for one or two days and results in the person's death. If the fever does not work, they are forced to swallow a snack, or in other cases, forced to drink muddy water after being left to starve. This effectively blocks their respiratory canal leading them to their deaths.

This district's ancestors were a mix of Tamils and immigrant Reddys who had traveled a long distance from the Nellore area of then-Andhra Pradesh. The eldest among those who are alive today remember that they had a peaceful childhood. They have treated their parents and grandparents with the utmost respect, and they recall washing their clothes in the now-defunct village pond. These examples are enough to understand that the custom of Thalaikoothal was not brought here by any migrants but instead arose at some point. It has since become a custom and a part of their culture.

Women now make up the majority of the senior citizens in society. Their men have either fled or committed suicide to avoid the disgrace of dying at the hands of their children.

As a Social Custom

Once upon a time, the custom used to be ceremonial. All relatives were invited and grand feasts were provided for the guests. The ceremony reflects on the financial and social status of the family. Wells had become a convenient way for people to commit suicide. The agriculture-oriented land has many wells because of the burning climate of the region. The majority of them have leveled up because of their Vaishnavait beliefs, which have rendered them unusable. The pond, which was common for many groups of people, was also closed for the same reason. The locals also believe the pond to be haunted, infested with the souls of people who had to give away their lives in it. When a person commits suicide, people do not bring their bodies back home. They are cremated and buried in a common cemetery. It is believed that when someone dies by suicide, their spirits take one another soul closest to them. To overcome this, the bodies are cremated with another soul, perhaps a chicken or something of that sort.

The Hindu, News18, and many others had followed the story, which CNN had taken into public awareness. The media frenzy was restricted, and the people of these villages were misled into the belief that the Jayalalitha government had endorsed the ceremony. This belief has remained convincing ever since. 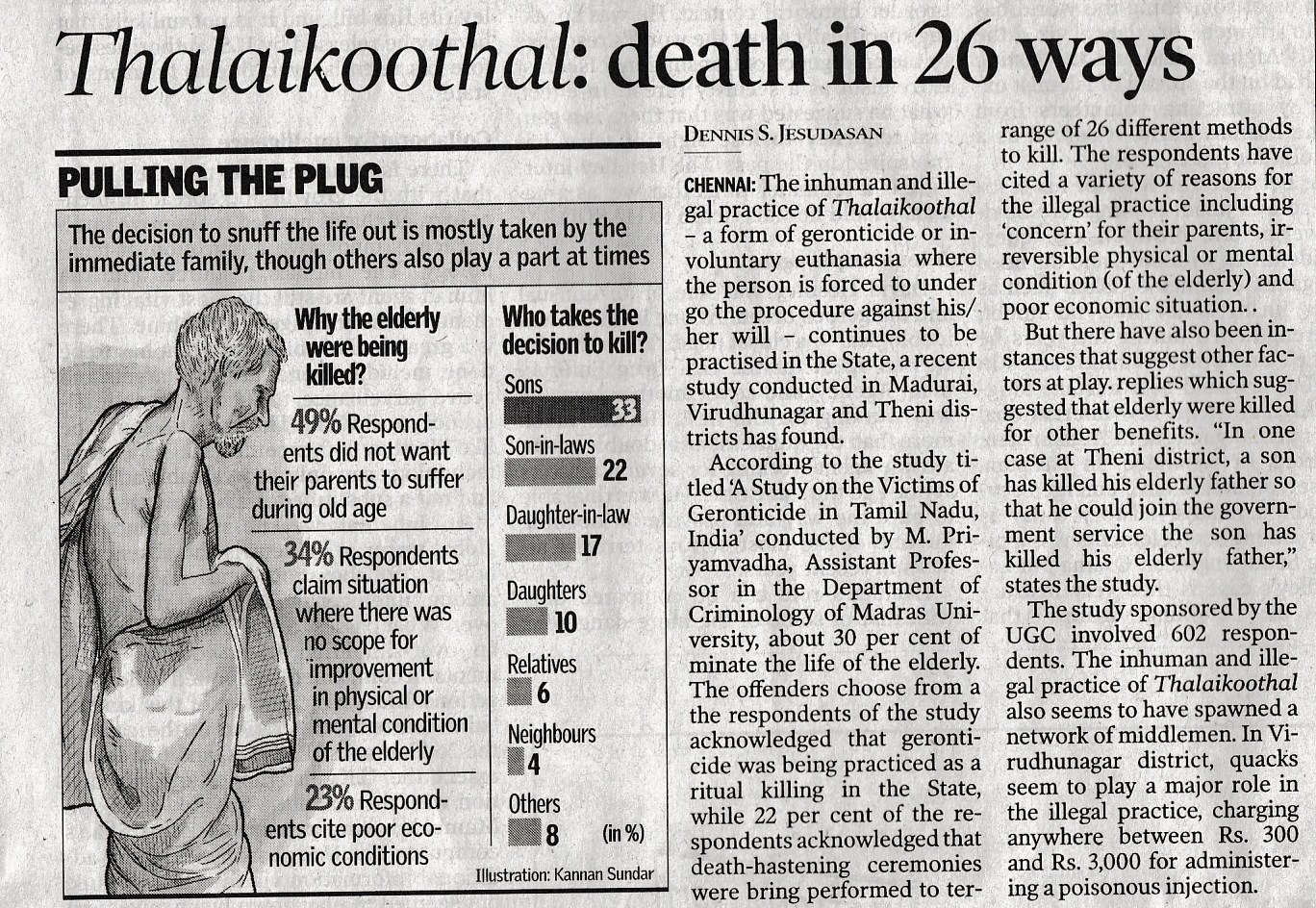 These villages are inaccessible to outsiders. With just a few around 100 in total population, an outsider is easily recognized. As the media began to portray society in a negative light, locals became more vigilant and hesitant to open up to the public, until the number of deaths increased. The police and the local government bodies have locked this situation from outside access. According to them, it is a better way of dealing with financial crises when the family cannot make ends meet for the healthier members. Various investigations and research have revealed that this custom was actively practiced in the 1980s, particularly among families in financial distress.

Today, the government has launched several programs to protect and ensure that the elderly receive adequate care. There are various programs that provide pensions for retired and aged citizens. However, as a result of the tier-level defragmentation of corruption, many people who are qualified for a pension do not receive it. Sometimes their names are even removed from these lists. Since the growth of NGOs like HelpAge India, efforts have been made to promote the needy.

A few years back, a journalist reported on a similar story in a local magazine whose readership was well under 1000. The story was told to him by his maid about how they had done Thalaikoothal for her husband. And this time, it was carried out in the city of Madras. The practice has grown out of its usual village setting along with the people who have gone out to the settlements.