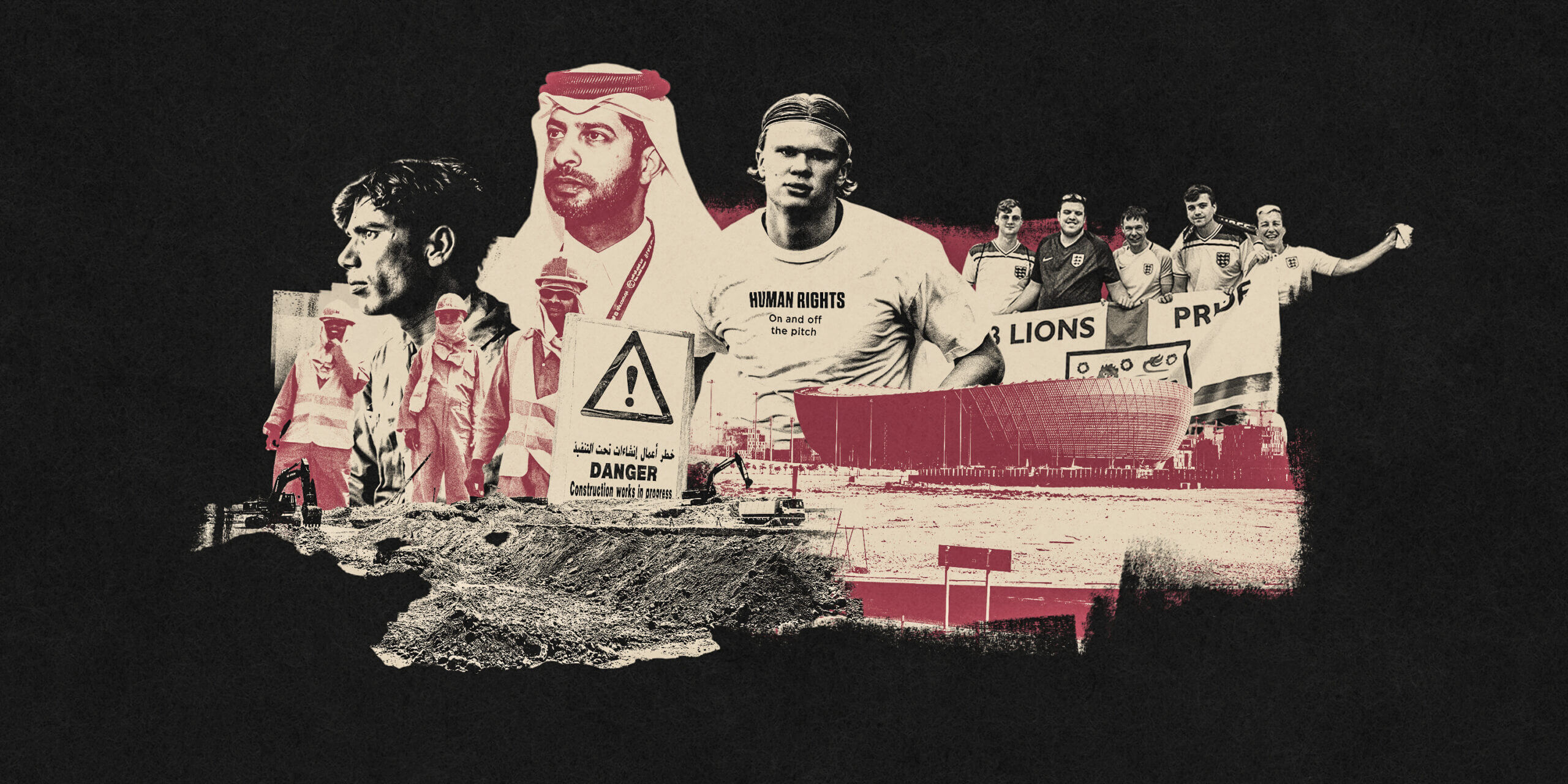 The 2022 FIFA World Cup tournament is scheduled to begin in Qatar, Doha, on November 20, which brought festivities to the streets of Doha and was anticipated to bring excitement and expectation to soccer fans worldwide. Global citizens have held FIFA, the worldwide soccer governing body, accountable for the controversies surrounding the nation's participation in the competition, which prompted widespread condemnation of FIFA's decision. This year's FIFA World Cup, intended to be the most renowned sporting event, has been overshadowed by criticism of Qatar.

Qatar is a small country with a population of 2.7 million. It is situated on a small desert peninsula that extends north from the broader Arabian Peninsula. Known as "Middle East for Beginners," the region became subject to the Islamic caliphate with the emergence of Islam. It is stated that in Qatar, one may experience the opulence and flavour of Arab culture without losing Western comforts. Their petrochemical reserves are proportional to the size of their country's landmass and have delivered the nation considerable financial prosperity. Despite its diminutive size, the country has been able to attract positive global attention with its flourishing economy, desire to spend its wealth to enhance the lives of its people, and commitment to building educational and cultural institutions. The country's good fortune has earned them the right to host the 2022 FIFA World Cup, although this honour has been accompanied by controversy surrounding the event. The first criticism levelled against the country hosting the sporting event was the country's inability to accommodate summertime temperatures that routinely exceed 100 degrees.

In 2010, FIFA awarded Qatar the country to host the 2022 World Cup. However, Qatar has subsequently been considered responsible for the scandals surrounding the awarding of the tournament. Severe allegations, including allegations of corruption and bribery during the bidding process to host the tournament and accusations of slavery towards migrant workers. They have also been accused of using the event to "sport wash" the issue of human rights violations that have allegedly occurred since the tournament was awarded. The first criticism levelled against the country hosting the sporting event was the country's inability to accommodate summertime temperatures that routinely exceed 100 degrees. Qatar has kept labour costs low by utilising a network of low-wage migrant labour to prepare for the event, for which it has invested about $220 billion on new infrastructure. In 2010, the vast majority of Qatar's roughly 2 million migrant workers, comprising approximately 94 percent of the country's total labour force were employed through a notoriously coercive labour system known as the kafala (or sponsorship) system, which legally bound workers to a sponsor through a series of contracts. However, Qatar has significantly modified the kafala system in recent years. They have eliminated the requirement that workers obtain their sponsor's consent before leaving the country or changing jobs. Still, the vestiges of this system continue to offer employers disproportionate control over the lives of their employees.

An investigation by the Guardian revealed that 6,500 migrant workers from India, Pakistan, Nepal, Bangladesh, and Sri Lanka have perished in Qatar in the ten years since the country earned the right to host the World Cup. This led to the claim that Qatar has engaged in slavery-like labour practises. Since the night in December 2010 when large crowds celebrated Qatar's win on the streets of Doha, an average of 12 migrant workers from these five south Asian countries have died each week, according to data compiled from government sources. Death records from India, Bangladesh, Nepal, and Sri Lanka revealed 5,927 migrant labourers perished between 2011 and 2020. Separately, Pakistan's embassy in Qatar reported an additional 824 Pakistani worker deaths between 2010 and 2020.

An alliance of human rights forums urged FIFA and Qatar to establish a remedy fund of at least $440 million. The exact amount of the World Cup prize money to compensate the tens of thousands of migrant workers who have not received adequate compensation for the severe labour abuses they endured while constructing and servicing infrastructure essential to the preparation and delivery of the World Cup in Qatar.

When it comes to political controversies surrounding the hosting of the FIFA World Cup, Qatar is not a novice. The 2018 World Cup in Russia  aroused suspicions about FIFA's close ties with authoritarian governments such as Russian President Vladimir Putin. The 2014 World Cup in Brazil sparked international outrage over the forcible relocation of thousands of poor and working-class Brazilians to create room for new tournament-related infrastructure. Because of this, soccer fans viewed the choice as highly suspect, and as a result, Qatar has been accused of being maliciously motivated. This is because the desert monarchy soccer team, which has never qualified for a World Cup, legitimately defeated global athletic powerhouses such as the United States, Japan, and Australia in their bids to host the tournament. In 2014, the UK-based Sunday Times revealed that a cache of hacked emails and other documents suggested that prominent Qatari soccer official and former FIFA executive committee member Mohammed bin Hammam had reportedly paid FIFA executives millions of dollars in bribery. Michael J. Garcia, FIFA's chief ethics investigator and a former United States attorney, discovered significant anomalies in the bidding process but no clear evidence that Qatari officials had used bribes to influence the decision.

“Sports washing” refers to individuals, organisations, corporations, or governments using sports to improve their tainted public reputations.Using Qatar as the prime example of sports washing, Qatar has become the focal point of this ideology. International human rights organisations have condemned Qatar for decades for its laws restricting the rights of lesbian, gay, bisexual, transgender, intersex, and transgender (LGBTQ) individuals and women, particularly for penal code sections that prohibit sexual relations between same-sex partners. Despite the infrequency of charges under these rules, LGBTQ Qataris continue to allege pervasive police harassment and intimidation. The World Cup organizers have suggested that LGBTQ supporters will be safe and welcome at the tournament. Still, some Qatari activists continue to express concern for the safety of LGBTQ tourists.

Regarding freedom of expression, Qatar has a comparable record of failure. The country's legal code criminalises criticism of the emir, blasphemy against Islam, and the dissemination of "fake news," The administration has weaponised these prohibitions to silence critics and punish dissenters. The Qatari government accused seven residents who had opposed the country's newly stringent voting legislation of "using social media to promote false news" in August 2021. The administration has also targeted independent journalists who travelled to the country to report on the working conditions of migrant workers. Moreover, the government has imposed extensive restrictions on journalists travelling to cover the World Cup, a move that human rights organisations fear will have a "serious chilling impact" on media coverage of the tournament.

Moreover, since the World Cup in Qatar is a global event, foreign news and media outlets have expressed their disdain towards the nation. Citizens and celebrities worldwide have weighed in on the controversies surrounding the tournament. Citizens and celebrities from around the globe have weighed in on the controversies surrounding the competition. Dua Lipa disputes rumours that she will perform at the 2022 World Cup by posting on Instagram, “I will not be performing and nor have I ever been involved in any negotiations to perform.” She also expresses her hope that Qatar will honour its human rights commitments to win the bid. The LGBTQ community voice their disapproval of David Beckham's acceptance of the £10 million deal to be the ambassador for the new Qatar World campaign.The comedian-turned-gay-mastermind Joe Lycett responds to David Beckham's refusal to terminate the ambassador contract by broadcasting a video of him shredding £10,000 in response. In addition, Lycett stated that he would donate £10,000 to a charity that helps gay people in football if Beckham terminated his purported multimillion-dollar contract due to the country's position on LGBTQ+ issues.

As a form of criticism, British news networks such as the BBC and ITV do not broadcast the World Cup opening ceremony on television, forcing people to view the event online. The Qatar FIFA tournament was inaugurated with a glamorous event at the Al Bayt stadium in Doha, during which actor Morgan Freeman delivered a stirring monologue and Jung Kook of South Korean boy band BTS performed live. Due to a 20-minute delay in broadcasting the concert, however, British viewers missed most of the spectacle.The television station aired a pre-packaged report about Qatar's dubious human rights record and the tournament's controversies. Fans expressed their displeasure with the BBC's move, with many pointing out the BBC's hypocrisy in maintaining the tournament's broadcast rights while simultaneously limiting viewership.