The Crumbling Spirit of the Saviour - Why are the doctors protesting? 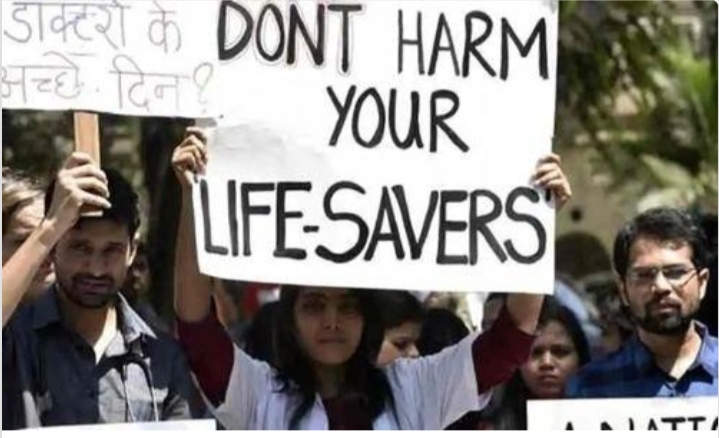 In the past week, two isolated cases of violence against doctors in Assam and Karnataka shocked the nation. Several posts started making rounds in protest of the intolerance against health workers and medical practitioners.

A video of Dr. Seuj Kumar Senapati went viral and received huge flak, showing him getting assaulted by the kins of a deceased covid patient in Udali Covid Care Centre (Hojai district, Assam). He was appointed as a medical officer under the NHRM scheme.

In another harrowing incident, Dr. Deepak, a pediatrician, was attacked while returning home near Tarikere fire station in Karnataka. The attackers were the family members of a 6-year-old dengue patient who later succumbed to it.

Several other incidents of man-handling and physical assault of the healthcare workers and resident doctors in Delhi have been reported earlier in April. India is going through a national health crisis since 2020 when the Coronavirus wreaked its havoc. Incidents of intolerance against the doctors took place last year as well. The infamous case of violence against on-duty interns in NRSMCH, Kolkata, sparked protests across the nation supporting Dr. Paribaha Mukherjee and two of his colleagues after they expressed anger over the persistent violent attacks against doctors. The Indian Medical Association (IMA) President Dr. JA Jayalal demanded Central Government to declare hospitals as a "protective zone". Doctors at Guwahati Medical College and Hospital ( GMCH) also united in protest of the incident.

In a PIL filed by Dr. Rajeev Joshi seeking protection for doctors in Maharashtra, the Bombay high court asked the state to present total FIRs registered in the state for assault of doctors and hospital officials.

According to the PIL, four hundred and thirty-six cases were presented which were a result of negligence, and non-compliance, to the existent legal provisions, like prevention of violence, and damage, or loss of property act, 2010

In a recent hearing on Thursday, Madhya Pradesh high court termed the protests of junior doctors in the state "unlawful," to which 3000 doctors resigned from their posts.

Indian Medical Association (IMA) reported that 46.3% of doctors fear violent repercussions. Meanwhile, 62.8% of doctors surveyed are afraid of their patients, whereas 57.7% have thought of hiring security personnel on their premises.

Dr. Prakash Murthy, in his recent video, discussed the mental pressure and angst hospital officials go through when they come across patients who have very bleak chances of survival. While discussing his emotional encounter with such patients, he requested the viewers to wear a mask and take proper precautions.

Avinash (name changed on request) is a third-year medical student who finds violent attacks on the doctors fearful and heinous. He also expressed his concerns about getting posted as an intern in rural area with inadequate sources and facilities."Fatality in such areas cannot be blamed solely over the doctors who try their level best and sacrifice their sleep to help the patients in need", he said.

Another aspiring student stated that she is reconsidering her decision to prepare for NEET( National Eligibility Entrance Test conducted for students aspiring to become doctors). Such statements reveal the impact, violence has levelled upon the young students & doctors. Majority of aspirants are planning to practice abroad after completing their education in India in the wake of such incidents.

Statements of famous yoga guru and industrialist Baba Ramdev critiquing allopathic medicine and doctors irked the medical fraternity. Union health minister Dr. Harsh Vardhan also intervened and asked him to refrain from giving provocative statements demoralising the frontier force of healthcare. Meanwhile, Delhi high court has stated that he is free to voice his opinion and has Freedom of speech.