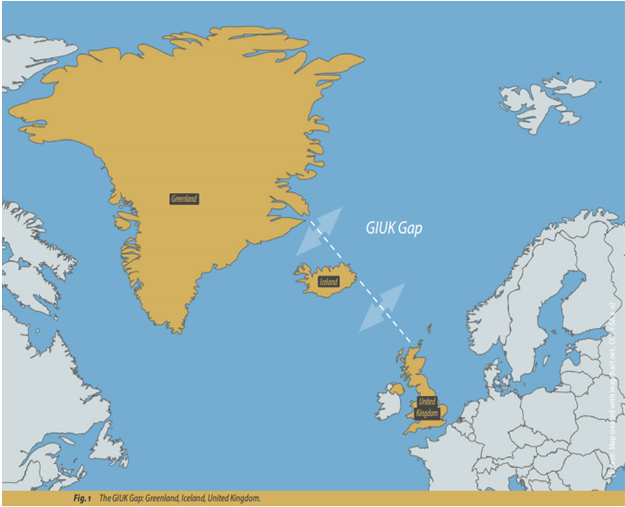 The GIUK gap is an area in the northern Atlantic Ocean that forms a naval chokepoint. Its name is an acronym for Greenland, Iceland, and the United Kingdom, the gap being the open ocean between these three landmasses. It thus forms the connecting corridor, between North Atlantic to the Norwegian Sea, and from there to the Arctic Ocean. Arctic ocean also includes territories belonging to the USA ( Alaska ), Canada, Denmark ( Greenland), Iceland, Norway, Russia, Sweden, and Finland. During the Cold War, the GIUK Gap was the key to Europe’s maritime defense.

It was vital to Europe’s maritime defense during the cold war. The Soviet naval forces have had to push their regiments from this chock point to reach the Atlantic and preventing the US forces to cross the sea & reinforce their European Allies. So, the Soviet army stationed nuclear-armed submarines, and also had conducted various operations in this area. And in the very same way, NATO stationed the area with their submarines to deter the Soviets.

The US armed forces left Iceland in 2006 and, the United Kingdom withdrew its fleet of maritime patrol aircraft in 2010. The Netherlands had already discontinued these patrols in 2003. Submarine warfare and the North Atlantic became less relevant within the NATO framework when the cold war ended. And north Atlantic became less crucial in the NATO framework.

The GAP Is Back –

With a surge in Russian military power, the giuk gap has taken new meaning once again for NATO & the rest of the world. For some years Russian Federation has been a peer competitor again, particularly in the maritime sector.

As part of Russia’s 2013 policy for the arctic, the Russian government has initiated extensive measures, which include military bases, air bases in the far north part of the arctic region, after “Murmansk” which means a new state for the military.

Russia has shown a strategic interest in the far north region by the deployment of its strategic submarine fleet. Their Arctic strategy of 2020 and the creation of the fifth military district In North ( Northern fleet joint Strategic command ) in April 2019 have further highlighted the significance of the Arctic and the far north. Now the importance of GIUK has changed for NATO, as compared to before, Russia has modernized their weapons as now they can fire their long-range missiles from submarines from the Norwegian sea.

Russian forces now would be able to attack targets in Northern & Central Europe such as Bremerhaven, NATO’s capability to deploy troops & arms can also be disrupted. Today, due to global warming, when the arctic is melting & new routes are opening for trade b/w Asia & Europe & also arctic is a center of natural gas, hence emphasis Sloc’s& longitude are running from the north Atlantic & north pacific. Russian is in dictating position due to its EEZ & geographical position.

NATO, Germany, and the GIUK-N Region-

Several NATO states have recognized the renewed significance of GIUK GAP and the adjacent Norwegian Sea ( GIUK- N Region ). Now the USA has returned to the region and has used some funds earmarked for the European reassurance initiative to modernize the facilities, in Keflavik, Iceland. The UK has also bought nine Poseidon maritime reconnaissance aircraft to conduct patrols in the Arctic region, in addition, of Royal Air force is planning to squadron stationed in Lossiemouth in Moray to be fully operational by 2024.

Norway is also looking forward to concerning the future of its maritime patrol options.

The GIUK-N Issue was placed on the agenda when Germany chaired the Northern group in 2019 with an agenda to emphasize the maritime importance of the area.

During the cold war, NATO maintained vast command over GIUK, but this isn’t realistic today due to lack of force. Strategies based upon regional hub would help NATO efficiently. Because focusing on one region specifically would cause ignorance of the importance of other regions in terms of development, growth & political view.

NATO here, elevates the role of “MARCOM” for navel policies & a joint alliance, should be made to reduce the difference b/w nations which would be more effective.

For the possible course of actions GIUK-N region are changed, but a significant role in transatlantic security, there is a whole range of possible measures that NATO can consider & its member speak “ close the gap”, so to speak. They include -

Establishing a center of excellence ( CoE ) to coordinate training and research for Northern group member states to face the challenges posed by Russians in the far North, Atlantic & Arctic.

It served as a helpful reminder about the evolving nature of the international security environment and the dangers of becoming preoccupied with a single region, mission. Because no one can predict what the future holds, NATO must invest in a broad mix of air, land, and naval capabilities to ensure that the union remains agile, adaptable, and fit for purpose.

In terms of the North Atlantic, the strategic importance of the GIUK Gap while revealing two sobering realities. Participants quickly realized that allies’ capabilities and knowledge of the region had significantly atrophied over the years. They also encountered an array of asymmetric tactics to which the union is ill-equipped and ill-prepared to respond effectively. The alliance should use that gathering to address the dire state of allied readiness, update NATO’s maritime strategy, enhance its work in the area of cyberspace, and with long-term acquisition plans.