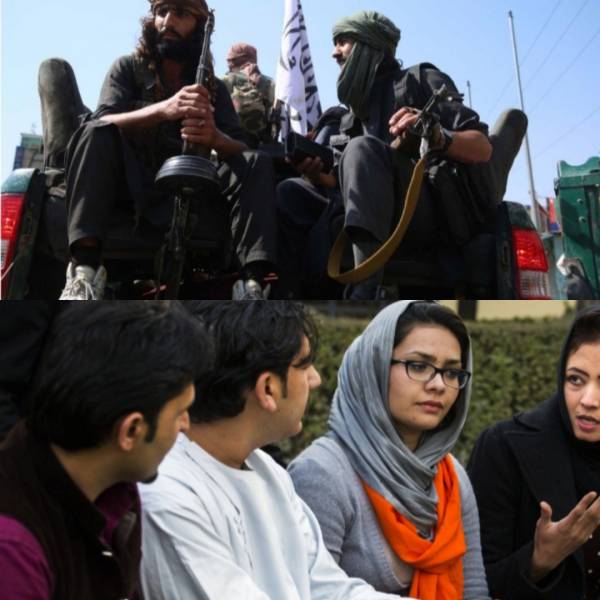 With the Taliban asserting its control over Afghanistan recently, citizens across the world called for consular aid and cried for help. The citizens within the borders of Afghanistan flocked to Kabul’s Hamid Karzai International Airport to flee the challenges posed by the Taliban, a Deobandi Islamist religious and military organization which aims to rule the land under Sharia laws.

Amidst all these developments, students studying abroad have come under the scanner. The regime aims to pose strict rules by imparting education only permissible under Islamic law. Afghanistan saw such dreadful and atrocious rule two decades back in the past. Their rise has led to dread of the revival of caging women in the domestic arena under veils through the malpractices of child brides. Afghani students have called out this development on social media mourning the end of freedom, development, and democracy.

They also called for seeking help from the countries providing meritorious students with scholarships. Recently, 35 students faced a ban from the Foreign Office of the United Kingdom (UK) government for scholarships of British Universities, as the embassy could no longer manage to work on the approval of their visas. Amidst the fear among students that the Taliban might target them next for the scholarships. They were informed about the pause of the Chevening Programme, for the session of 2021-22 in Afghanistan.

The decision came in after the disruption of consular functions in Kabul, ever since the Talibani Military Force started reinforcing its power across Afghanistan, which progressed after the US military vowed to go back. The decision of the British Foreign Office was met with sharp resistance back in the UK Parliament. The Foreign Secretary, Dominic Raab was reached out to intervene, following which the British Prime Minister Boris Johnson announced that his government will help these students stuck in Afghanistan.

A female student, resident of Kabul wrote about the atrocities women in Afghanistan fear. Without naming herself she wrote that on Sunday morning when she reached University, women told her that the police arrived to evacuate them from the University as the Taliban had entered the capital city of Kabul and would punish women severely if they are seen without Burqas.

She recalled that while moving back she witnessed the posters of women getting whitewashed. Women pleaded for public transport services to help them reach their homes but they were denied the services because they feared punishment by the deadly regime for providing a haven to such women. Men on the other hand made fun of the women and their conditions. Women of academia were mocked and taunted for their choices. Young men remarked, “They wouldn’t be running to hide their identities and degrees if they followed the strict Talibani Islamic instructions by not stepping out of their homes.”

Most of the students are reluctant to reveal their identities because they fear violent repercussions from the Taliban. Similarly, Afghan students in India are stuck in the situation of uncertainty looming over them. A student residing in Bengaluru mentions that all her dreams seem to have crashed, what will she do when she goes back home after her degree in Journalism, sit at home with no voting rights?

Another student, a scholar sponsored by the ICCR for higher studies in Odisha says that the very act of studying abroad seems to scare him for this might soon be regarded as an act of treachery against the state. Students dwell in fear worrying about their families back in Afghanistan and are praying that the Taliban regime doesn’t go door to door in search of the families of students studying abroad.

With many students having their Visa tenure in India ending by December 2021, struggles to find an alternative has made the student community anxious. Around 22 students of Afghanistan who enrolled in Jawaharlal Nehru University (JNU) have sought the extension of their visas through the academic courses they have enrolled in. IIT Bombay are some of the varsities which have allowed the students of Afghanistan to stay in Hostel with the extension of their incentives and scholarships.

Students of Afghani origin have removed their images on the social networking sites fearing their families getting targeted. They have started campaigning anonymously for the aid of the residents of Afghanistan. Guidelines and instructions aiming to save women have asked them to shut their social media, identities, diplomas, degrees and save themselves by moving out of the country. News of Taliban fighters being provided with women abducted from their houses as their wives have been doing rounds amid the targeted assassination of journalists, artists and scholars.

The Director of Research and Policy at ATR Consulting in Kabul remarked that “It is these people, the top minds in the country(who) needs to be saved. Afghanistan will need them. And these countries that have invested so much in Afghanistan over the past twenty years will need them to restore the situation in the state."

A new category of Visa extension through electronic means for Afghani citizens has been introduced by the Government of India. All Afghanis irrespective of their religion are eligible for an e-Emergency X Misc. Visa which will be valid for six months keeping the security of Afghan nationals as a priority. The decision was announced after two days of the dissolution of the Democratic government of Afghanistan. After President Ashraf Ghani left the country in mayhem, requests started flooding in the Indian embassies to extend visas. The Ministry of Home Affairs responded swiftly to review the applications of Visa by Afghan citizens.