"The one that rolls up" 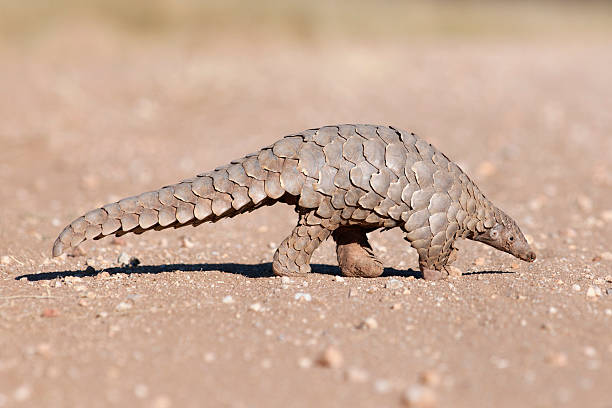 The scaly anteater, sometimes confused with being a reptile, is an interesting creature. This small mammal armoured in scales - consisting of the same material we find in our nails and hair – is the only one of its kind. These scales are used to protect their bodies from predators by rolling themselves into a little ball, but this tactic is useless against humankind’s greed.

This oddly cute animal is unfortunately in imminent danger and some of the 8 species found across Africa and Asia, are on the brink of extinction. Animal trafficking is a real threat to our animal kingdom, and we see it left and right. People are unfortunately turning a blind eye towards these issues because they do not have sufficient knowledge of the effects poaching has on our world’s ecology.

Pangolins are one of the most poached mammals in Asia and it seems like Africa is catching up with this abusive “trend”. The meat is quite a treat in some cultures and other Asian cultures believe in the supposed medicinal value of their scales. Worldwildlife.org stated that there is also a growing demand for products made from pangolin leather in the USA. To be clear, there is no proof that keratin, or more specifically, pangolin scales, have medicinal properties.

According to WorldAnimalProtection.us, it is difficult to estimate how many pangolins are left in the wild. Unlike a rhinoceros that needs to be shot before its horn can be removed, poachers can just put a pangolin in a bag and man-handle it to its tragic death. A common statistic found is that since the year 2000, over 1 million pangolins have been poached in the following decade. However, this is still only a statistic and does not include the trafficking that goes unnoticed by authorities. There might be thousands more that slip through the cracks in our law system.

Laws have been implemented to reduce the number of killings of pangolins to possibly decrease their extinction rate. These laws are applicable on international levels, but the punishment for this illegal action is shockingly mild. You will spend about only 2 years in jail in Hong Kong at most, according to Earth.org. There is some hope for justice, though, when a South African man was sentenced to 10 years in jail for poaching pangolins.

A strange topic has recently come up regarding the relation between pangolins and the newly discovered virus, Covid-19. Some have speculated that the consumption of pangolin meat influenced the outbreak of Covid-19. It is not unusual to find coronaviruses in animals, so this speculation might be a breakthrough for pangolins. If these theories are adhered to, stricter laws, and perhaps even the prohibition of keeping these animals for any reason, can be put in place to stop the poaching of pangolins.

It's a difficult pill to swallow when one learns that a pangolin only bears a single pangopup. This will never be sufficient in repopulating the pangolin species. Therefore, pangolins need a helping hand from humans who have the capability to change the destiny of pangolins.

We can spread the word of the pangolins on World Pangolin Day which falls on the third Saturday in February annually. The news of the plundering of pangolins has spread far and wide. The people of the world should stand up for those who don’t have voices. These pangolins cannot stand up for themselves. We should give our future generations a chance to know all 8 species of the pangolins. We have failed to save many other species of animals from the hands of humanity; let’s change this critter’s fate.