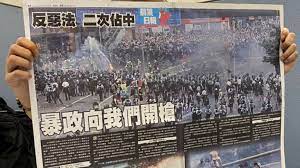 Apple Daily, Next Media's main tabloid on Wednesday said that it would cease publication on Saturday due to an unfavorable environment in which its writers had been imprisoned, and millions of dollars in assets had been blocked. The headquarters of the journal were raided last week on suspicion of breaking the city's National Security Law with various reports. Assets tied to the company worth $18 million, were frozen late. The company's chief editor and five other executives were also seized by police. Jimmy Lai, the company's founder, is already serving time in prison for several offenses. The tabloid has a reputation for being critical of Hong Kong's and China's governments.

Apple Daily had previously stated that it would determine whether or not to close the publication at a meeting on Friday, but the parent company's decision came on Wednesday. It also revealed that it just had enough funds to run its business for "a few weeks." The announcement sent shivers through Hong Kong's media business, casting doubt on the government's claims that the new legislation would not limit press freedom. Last year, China's ruling Communist Party bypassed Hong Kong's legislature to adopt the security law, bringing the city closer to its totalitarian authority.

Subversion, secession, terrorism, and coordination, with foreign forces, are all punishable for life in jail, according to the authorities. While Carrie Lam, the mayor at the time, stated that press liberties, would be respected, Apple Daily employees claim they knew it was only a matter of time before they were attacked. “But it still came as a shock when it happened,” said one of the publication's journalists, who requested anonymity due to security concerns.

Apple Daily has been gradually weakened since the law went into effect. Founder Jimmy Lai has been detained and charged with cooperating with foreign forces to damage national security. He was already in jail for attending a pro-democracy event. Five of the newspaper's top editors and executives have been charged with the same offense, allegedly for using stories to push for international sanctions against Hong Kong. Jimmy Lai created Apple Daily in 1995, putting his fortune as a textile magnate into the Next Digital publishing company. The aim of Apple Daily, the company's flagship publication, was always clear: to oppose the

Communist Party, from whom Lai had left mainland China as a child.

Police officials raided the newsroom again on Wednesday, this time arresting two more journalists while the board met to assess the paper's future. The paper announced hours later that it would close its doors after 26 years on newsstands. One of Lai's senior advisers, Mark Simon, said, "A woman sent me a note a few days ago stating she doesn't feel as comfortable without Apple Daily as she used to have a free press as the guardian of society."

“They'll be after the rest of us soon.”

It's crucial to realize that Hong Kong is not like the rest of China's cities. To comprehend this, you must first examine its history. For more than 150 years, it was a British colony; following a war in 1842, a portion of it, Hong Kong island, was ceded to the UK. The rest of Hong Kong, known as the New Territories, was afterward leased to the British for 99 years by China. It grew into a bustling commercial port, and its economy soared in the 1950s as it grew into a manufacturing center. Migrants and dissidents fleeing mainland China's turmoil, poverty, and persecution flocked to the area.

Then, in the early 1980s, as the 99-year lease's expiration date approached, Britain and China began discussions on Hong Kong's future, with China's communist leadership insisting that the entire territory should be transferred to Chinese control. Under the idea of "one country, two systems," the two sides negotiated a pact in 1984 that would see Hong Kong return to China in 1997.

This meant that for the next 50 years, Hong Kong would have "a high degree of autonomy, save in foreign and defense affairs," despite becoming one country with China. As a result, Hong Kong has its legal system and borders, as well as protections for rights such as freedom of assembly, free expression, and freedom of the press. Hong Kong still has liberties that mainland China does not, but they are commonly seen to be dwindling.

China has been accused of interference in Hong Kong by rights groups, citing incidents such as court judgments disqualifying pro-democracy legislators and the abduction of five Hong Kong booksellers and a businessman, all of whom subsequently resurfaced in a Chinese prison. There have also been claims that press and academic freedoms have deteriorated. China essentially evicted many US journalists in March, but they were also barred from working in Hong Kong. The Hong Kong government has put pressure, on the public broadcaster RTHK, first for airing an interview with the World Health Organization regarding Taiwan, and then for airing a satirical news show called "Headliner" that targeted police.

The local examinations organization was also chastised for a world history question about Japan-China relations, with the government ordering that the issue is removed from the exam. The administration claimed it was a professional choice, not a political one, but many academics were concerned. While the majority of Hong Kong residents are ethnic Chinese, and the city-state is part of China, the majority of residents do not identify as Chinese.

According to surveys conducted by the University of Hong Kong, the majority of people identify as "Hong Kongers" (only 11% call themselves "Chinese"), and 71% said they are not happy to be Chinese citizens. The disparity is especially noticeable among the young. "The younger the responses, the less proud they are of becoming a Chinese national citizen, and the more hostile they are toward the Central Government's policies on Hong Kong," according to the university's public opinion program. Dissent has a long history in Hong Kong, dating back even further than the last few years.

Demonstrations erupted in 1966 after the Star Ferry Company sought to raise rates. The protests turned violent, a full curfew was imposed, and hundreds of military were deployed to the streets. Since 1997, protests have continued, but the most significant ones now tend to be political, pitting demonstrators against mainland China's position.