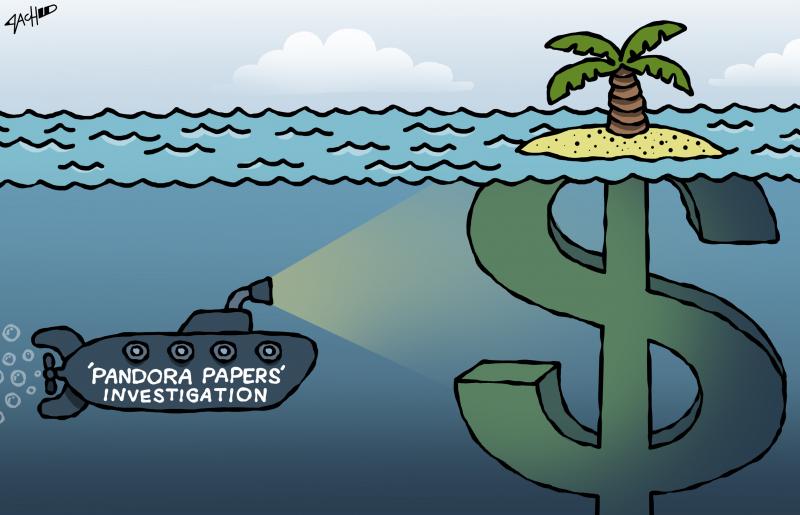 The International Consortium of Investigative Journalism collaborated with 140 media organizations and 600 journalists in 117 countries to pull off the largest-ever global investigation on record. A total of 11.9 million documents, from the years 1996 to 2020, were uncovered by the ICJJ with the help of 14 sources worldwide, exposing the financial dealings and extravagant real estate properties owned by many world leaders, politicians, film, and sports stars, and criminals. The leak has been termed the “Pandora Papers”. The investigation discovered the existence of several offshore corporations, also known as shell companies, that are set up to finance illegal activities such as money laundering and tax evasion.

Typically, such firms are incorporated in offshore territories which are mostly referred to as tax havens. These places have zero tax obligations and, the lenient laws of the land make it easier for people to start companies and challenging for authorities to trace them. The Cayman Islands, Panama, Samoa, and Luxembourg are some of the most infamous tax havens in the world.

Utilizing a tax haven or operating an offshore corporation is legal. Many resorts to offshore services to protect their money and assets. Nevertheless, the many loopholes in the system enable the rich and powerful to surreptitiously move around money and assets to raise capital and evade taxes. Though questionable, such kinds of tax avoidances are legal.

The International Monetary Fund estimates that governments worldwide lose $600bn to tax havens in lost taxes each year. Although there have been demands for stringent actions to be taken against such operations, none have caught on. Journalist Gerard Ryle, one of the lead investigators, believes lawmakers could end offshore financial dealings, which, ironically, are financed by themselves. Hence, such a move wouldn’t be beneficial in their view.

Hiding money offshore isn’t tedious. One must have the wealth and connections to set up or to create an association with an offshore corporation having high levels of secrecy. These firms provide a ‘Benami’, which leaves no trace of who is ultimately behind the business. Such corporations are often set up to facilitate narcotics trade, human trafficking, and terrorism.

Experts have failed to identify the precise sum of money which have been hidden away in these offshore accounts. The estimates have ranged from $5.6 trillion to $32 trillion.

Pandora's papers are not the first of their kind. Before this, there have been two major government leaks in 2016 and 2017, titled the Panama papers and the Paradise papers. Pandora, however, holds the record for being the largest of its kind.

Such an investigation on a global scale requires great effort, coordination, and manpower. The 2.94 Terabytes of files were released to ICIJ by the whistle-blowers in 14 different shell organizations. With the information at hand, the Washington-based Non-profit organization collaborated with the leading journalists and media houses of every country. The investigation in the USA was led by the Washington Post, the Guardian and BBC Panorama in the UK, and the Australian Broadcasting Corporation in Australia. The New India Express sourced the investigation from India.

Investigators were required to collect and compile information on the complete financial transactions of the wealthy in their respective countries. Politicians and top-tier party members, celebrities, and even wealthy individuals who had a criminal past were all included within the ambit of the investigation.

The ICIJ’s investigations revealed the names of more than 330 politicians from 90 countries. The reports uncovered the dealings of renowned socio-political figures including King Abdullah II of Jordan, the prime ministers of Côte d'Ivoire and the Czech Republic, the presidents of Ecuador, Kenya, and Gabon, and the former presidents of El Salvador, Panama, Paraguay, and Honduras.

The ICIJ's analysis found secret offshore holdings of more than 130 billionaires from 45 countries, including 46 Russian oligarchs.

What has been discovered thus far?


Furthermore, the Pandora papers allege the involvement of many Indians including our very own “Master Blaster” Sachin Tendulkar in suspicious acts of liquidation, embezzlement, and offshore investments. Anil Ambani, who declared bankruptcy in a UK court, has 18 offshore companies which have borrowed and invested approximately $1.3 billion. Kiran Mazumdar Shaw's husband established a trust with the keys to a person banned by the Sebi for insider trading; Nirav Modi's sister had registered a trust just a month before he fled India. Bollywood actor Jackie Shroff has poured substantial funds into a trust fund established by his sister from offshore accounts.

World leaders and celebrities have released public statements denying all allegations raised against them. “Any allegations that link these private properties to public funds or assistance are baseless and deliberate attempts to distort facts," stated Czech Prime Minister Andrej Babis. In a tweet, Babis added the revelations were an attempt to influence the election. Colombian singer Shakira and the German supermodel Claudia Schiffer are also named, with representatives for both telling the ICIJ allegations were fraudulent and baseless.

Governments have launched investigations based on the leaks and will attempt to find the inaccuracies and loopholes in the system, to which the accused have resorted to. The Indian government has directed the Reserve Bank of India, the Financial Intelligence Unit, and the Enforcement Directorate to conduct investigations on those individuals who have been named in the leaks.

The offshore system drains government treasuries, widens wealth disparities, and shields those accused of wrongdoing from prosecution without giving recourse to their victims. The Pandora papers have opened a backdoor to a parallel economy that is under the control of the powerful and wealthy and give no access to ordinary individuals.