The Rise and Fall of Sarbananda Sonowal: A Brief Outline of the Current Political Scenario in Assam 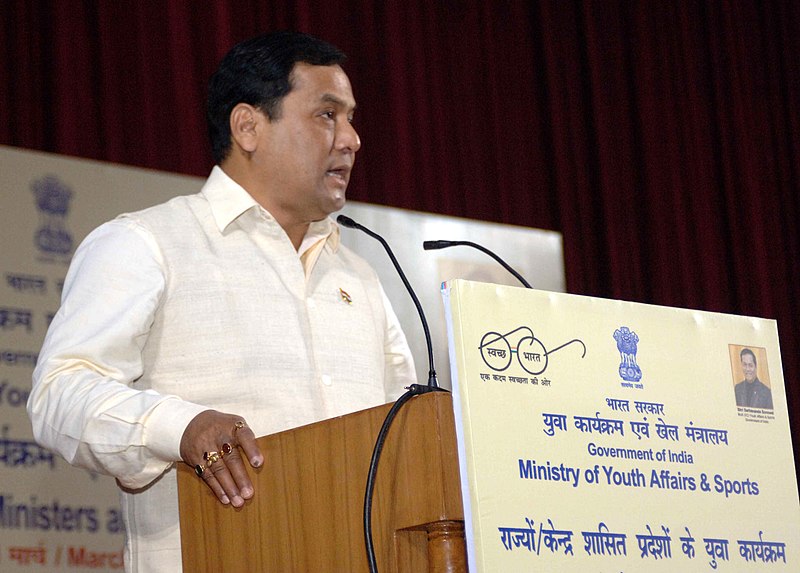 The UPA II government, hit by media and civil outrage over multiple scams at the onset of the previous decade paved the way for a resurgent BJP to make immense inroads throughout the country on the backdrop of a Modi wave. Riding on this immense cult-like popularity of their supreme leader, the party soon made massive electoral gains in the state and general elections alike. In Assam, Sarbananda Sonowal found himself in the driving seat of this BJP emergence in a region that was now lacking a regional alternative to the Congress after the AGP lost much of their old voter base.

Being the Union Sports Minister at the time, Sonowal successfully conducted the 12th South Asian Games in 2016, hosted in the Assamese city of Guwahati. The success of the event and his rising popularity cemented his claim as the poster boy of BJP in North East India. The current CM, Himanta Biswa Sarma, a highly respected and shrewd politician at the time had just recently joined the BJP outfit, after abandoning his camaraderie with the Indian National Congress, his reputation within Assam BJP was yet untested. Furthermore, Sonowal's slogan “Jati, Mati, Bheti,” (community, land and base) was a masterful work of statesmanship at the time and people were hopeful that the promises made between the people of Assam and the Government of India in the Assam Accord will finally be fulfilled. In that same year after the success of the major sporting event, he led the party to the Assam Legislative Assembly election victory and secured the position of CM uncontested.

Five years later today, the circumstances look much different for the BJP stalwart. Those familiar with Assamese history and geo-political discourse will know that immigration has considerably affected the psyche of the Assamese voter. The assertion of Assamese identity can be traced back to colonial times which was a result of a series of incentivised economic immigration from other parts of India, proposed and induced by the erstwhile British administration due to the comparatively low population in the newly acquired territories surrounding the Brahmaputra valley which needed a large labour pool for the native tea plantations, coal and oil fields.

This was further exacerbated by the administrative use of Bengali as the official language in the region by the then colonial government. As a consequence, it led to the formation of Axomiya Bhaxa Unnati Xadhini Xobha in 1888 in Calcutta by the Assamese students studying there to further develop and standardize the Assamese language. “The notion seemed to be that a “developed” language is a sign of a “developed” people; so the development of the language could be the road to the “development” of the people speaking that language,” wrote Sanjib Baruah in his book India Against Itself. It can be safely concluded that the development of the Assamese language was a reaction to the British policies at the time which culminated with the assertion of indigeneity, identity and language as resistance to settler colonialism. However, the immigration problem did not cease after independence, “Assam has been the fastest growing area in the subcontinent for the past seventy years,” wrote Myron Weiner in 1978, a year prior to the massive Assam Movement that brought the state to a standstill. Utter chaos ensued thereafter for six long years due to the central government’s mismanagement. The movement ended with the signing of the Assam Accord, the rise of the new regional party Axom Gana Parixad (AGP) and a gradual rise in extremist armed struggle and separatist movement led by the banned outfit United Liberation Front of Assam (ULFA) et al. Over three decades later, the scenario hasn't changed much, cross border infiltration still being a major political and cultural issue that is closely discussed in the public sphere. The porous border which lacks fences don't do much to instil confidence either.

Thus, Sonowal's promise of “jati, mati, bheti” naturally resonated with the Assamese voters in the 2016 state elections. This culminated in a massive NRC exercise that sought to document every citizen of the state and root out the so-called alien Bangladeshi settlers. But contrary to its intentions, the exercise simply managed to leave a bitter after-taste as millions of people were left stateless, including native Hindu Assamese speakers and a large section of the marginalized folks including indigenous people, tribals and Muslims that lacked or lost documents from previous NRC exercises in the state. The policy has also seen immense backlash from local, international and national media alike due to the instalment of internment camps reminiscent of the Nazi regime.

In the recent state election that has just been concluded, BJP has strategically steered itself away from its earlier stance on Jati, Mati and Bheti and instead taken a more conservative approach towards the old tried and tested “development” agenda. It is instead Congress and newer regional parties like Axom Jatiya Parixad (AJP) backed by the powerful student organisation All Assam Students Union (AASU) and Raijor Dol led by the jailed activist and now electoral representative of Sibsagar constituency Akhil Gogoi that has taken over this mantle of Jatiyotabadi politics from the BJP. This was on full display with vehement opposition to the Citizenship (Amendment) Act, 2019 just prior to the pandemic-induced lockdown.

This strategic distancing from identity politics by BJP plays skillfully into the hands of the current CM Himanta Biswa Sarma. One cannot accuse him of failing to keep promises if he never made them in the first place. According to an InsideNE article, Himanta on being questioned about the BJP's promise on Jati, Mati, Bheti by a senior journalist went on to say, “The BJP manifesto in the 2016 elections had lapses. It failed to elaborate on who is the jati. We didn’t mean Assamese chauvinism. We meant Hindu. And, people misconstrued it to be the community. It will not happen this time. We are preparing a manifesto where everything will be crystal clear. There will be no iota of doubt.” Whether this strategic maneuvering will pay dividends in the long run for the ruling party is to be seen. What is clear however is that the former CM will be kept on the sideline, his role in the state machinery most likely kept to a minimum and he could very well see himself sent packing to Delhi if recent reports are to be believed.