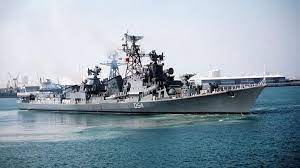 Three people were killed in the INS Ranvir explosion, which may have been caused by a gas leak in the AC compartment.

According to accounts, the blast on INS Ranvir caused a lot of debris as its three sailors on deck  were  trapped beneath it. The identities of the dead and injured have not yet been formally revealed by the Navy. According to authorities, the relatives of the deceased have been notified.

As per authorities, the Tuesday disaster in the  INS Ranvir , one of the Navy's oldest warships, was likely caused by a Freon leak in an unattended air conditioning chamber. A total of three people died and eleven injured. The dead sailors who died were present in the mess above the compartment when the explosion occurred, and not in the internal compartment. They were trapped beneath a large amount of debris caused by the blast, according to reports.

The explosion at the docked ship in the Naval Dockyard was certainly unrelated to ammunition. All members of the crew were aboard in the ship. According to a source, the Ranvir had been there for a long time after having arrived from Eastern Naval Command on a cross-coast military deployment.  Source ( news18)

Ingesting the gas caused some people to fall on the ground whilst they tried to put out the fire. There were no serious injuries. Most people suffered ankle fractures, a few of who suffered minor internal injuries. According to reliable sources, this is probably the result of ingesting Freon” Source ( news18)

Warships have several operating challenges. We are looking into the situation thoroughly , sai the officials. In addition to air conditioning gas and ammunition, water supplies run parallel to each other on a ship. Unlike other vehicles, warships cannot be switched off while a mission is in progress. All of these operational issues will be addressed.

Soon after it had  departed from the Eastern Naval Command, the INS Ranvir was scheduled to return. According to a statement by the Indian Navy, the matter has been referred to a Board of Inquiry for investigation.