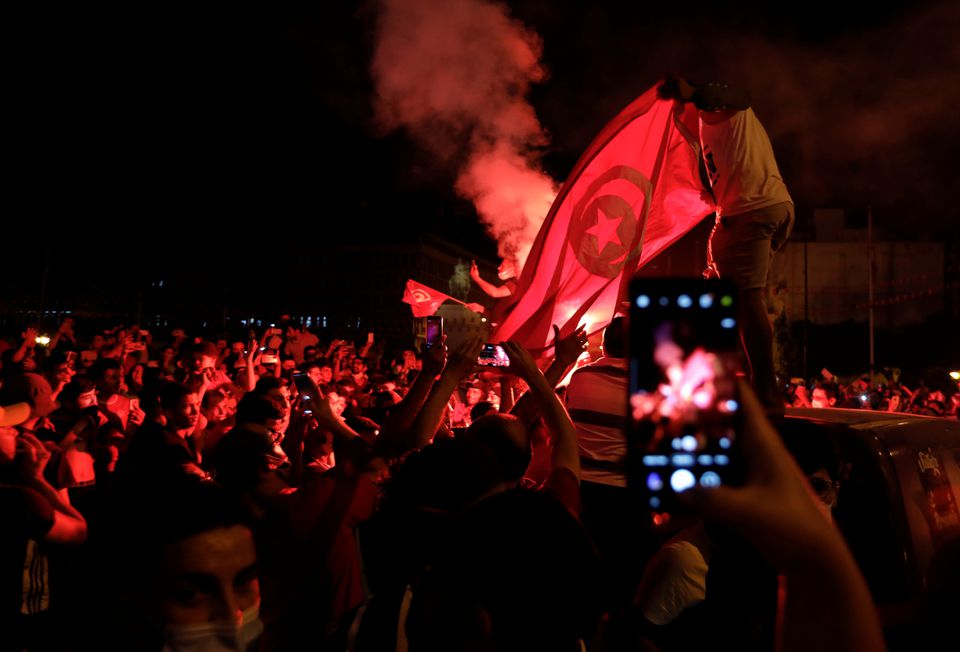 Tunisia’s president, Kais Saied, sacked prime minister Hichem Mechichi and suspended parliament for 30 days after violent protests broke out around the country. Protesters in thousands took to the streets and clashed with police on Sunday over the government’s mishandling of Covid-19. These demonstrations against the Islamist Ennahda party were carried out in the capital of Tunis and other cities. Protesters shouted, "Get out!", calling for the parliament’s dissolution.

These protests were called into action by social media activists on the occasion of the 64th anniversary of Tunisia’s independence. A new group called the July 25 movement has been central to encouraging people to take to the streets. The protests did not have the political backing of any political party. The anger was directed towards Ennahda, as it is the biggest party in Tunisia’s parliament. These protests also saw clashes between Saied and Ennahda supporters.

Security forces were deployed around the parliament building and the streets around Avenue Habib Bourguiba, which were important spaces for anti-government protests during Tunisia’s 2011 revolution. According to local media reports, the army also surrounded the state television headquarters. Protestors stormed the Ennahda party’s offices, breaking computers and setting its local headquarters in Tozeur ablaze. Attempts were also made to enter the party’s offices in Onastir, El Kef, Sfax, and Sousse. Teargas was used by the police to prevent protestors from entering Ennahda headquarters in Tunis. The party deplores the attack as the work of criminal gangs trying to spread chaos and destruction.

In a televised address following an emergency security meeting at his palace, the president announced that he would assume charge with help from a new prime minister to restore calm to the country. Following the news of the Prime Minister’s sacking, protestors broke into celebration late Sunday night. Crowds cheered, let off fireworks and honked their car horns in support, with President Saied joining the crowd in Tunis’s central Habib Bourguiba Avenue.

The president also warned against further violence and said that it would be met with military force. "I warn any who think of resorting to weapons... And whoever shoots a bullet, the armed forces will respond with bullets, "he said. Justifying his actions, he said that Article 80 of the constitution grants the president the right to suspend the parliament if it comes under imminent danger.

Some opponents consider these actions to be a coup. Rached Ghannouchi, the 80-year old Tunisian parliament Speaker and head of Ennahda, accused Saied of forcing a coup against the constitution and the 2011 revolution. He said the president decided without any consultation with him or the prime minister, as is required by the constitution, calling Saied’s actions an "assault on democracy".

Opponents have called on their supporters to protest against what they see as a coup. Ghannouchi encouraged people to gather on the streets to protest in a video message and also said that the parliament would not acknowledge Saied’s move and would meet in defiance. He arrived at the parliament building on Monday morning but was prevented from entering by the army. The Ennahda leader staged a sit-in protest in response outside the building.

Former president and leader of the party ‘Karama’, Moncef Marzouki, supported Ennahda’s charges of a coup against Saied. In a video statement, he urged the Tunisian people to pay closer attention to the situation. Contrary to this being the beginning of a solution, it was the beginning of falling into a far worse condition, he cautioned.

Tunisia’s constitution allows the president authority over foreign affairs and the military. However, after stampedes at vaccination centres due to mismanagement, Saied ordered the army to take charge of the covid response. To tackle economic woes, PM Mechichi had been in the process of negotiating a loan with the International Monetary Fund (IMF).

This loan was seen as essential to prevent a fiscal crisis as the country struggles to cover its budget deficit and meet upcoming debt repayments. People were, however, split over the proposed economic reforms. While the loan could solve many issues, it could mean that ordinary people might face the closing down of subsidies that they rely on. These issues have already left the government fragile in terms of people’s support.

Both the president and the parliament were elected in 2019 in popular separate votes. Hichem Mechichi had, however, only taken on the role of prime minister in 2020 after replacing a short-term government. Saied had been elected as an independent candidate while the parliamentary elections resulted in a chamber where no party had over a quarter of seats. The president and the prime minister have been involved in various disputes for over a year in light of the country’s continually worsening economic and health situation. In recent weeks, we have seen cases rise sharply, destabilizing an already crumbling economy even further.

Prime Minister Hichem Mechichi dismissed Faouzi Mehdi, the health minister, last week. However, this was not enough to calm people’s frustration and anger. Over 18,000 people have died of coronavirus in a country of over 12 million. Furthermore, the pandemic has landed a huge blow to Tunisia’s tourism industry, which has accounted for 16% of the country’s GDP for two years in a row now.

A decade ago, the Tunisian revolution established democracy and set off the Arab Spring revolts across the middle-east. However, the country has been struggling with an economic crisis and corruption amidst braving one of Africa’s most devastating coronavirus outbreaks. The country has been navigating an unstable political climate for years. In the 10 years following the replacement of the autocracy under the dictator Zine El Abidine Ben Ali, Tunisia has seen nine governments. Few reforms have been achieved under such unstable conditions.

Ennahda was banned before the revolution but has been the most successful political party in the country since then, forming several coalition governments in the past decade. The next few weeks will be critical to determining the direction Tunisia takes from the current political crisis.