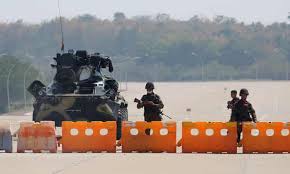 Myanmar on First February 2021, lost years of efforts that were made in the country to coming close to a popularly elected government. Myanmar is a country in South East Asia which has had a troubled past with state institutions and control of state power. A British Colony independent since 1948 has witnessed political instability since its inception. A decade post Myanmar’s independence there was continued internal strife in the nation by competing ethnicities. This resulted in the then democratically elected leader U Nu, to request military to take control of the state structures as a caretaker government. This military leadership voluntarily left the control of government following the 1960 Burmese General Election.

The first dissonance of power assertion by the military via sum motto cognisance came in the 1962 military coup. This military coup continued for 26 years under the leadership of Ne Win, which resulted in a democratic uprising by the frustrated citizens of Myanmar in the form of 8-8-88 Uprising/ People’s Democracy Movement and People Power Uprising. The Uprising was located in the frustrated growth that was experienced by the stifled youth of the country. It was during these protests that Aung San Suu Kyi entered the popular imaginary of the globe. This young leader became hope of not only the people of Burma but also an image of democratic dream globally. The struggle that began in 1988 continued till 1990 when Burma again had some semblance of free elections though military continued greater majority in the Burmese state structure. Aung San Suu Kyi during this decade was kept under house arrest, she, became the hope of non violent struggle globally to go on to become a Noble Laurette.

On 1st February 2021 military again organised a Coup D’état where the popular democratic leaders on Myanmar were put under house arrest. The Coup leader Min Aung Hlaing, has been able to depose the popularly elected leaders from the political alternative to military, coming from National League for Democracy. The motivation behind the current military coup is not clear. Though the silence of Aung San Suu Kyi during the Rohingya ethnic cleansing and accusations of active part in this ethnic cleansing by leaders of National League of Democracy could be a worrying precedence and context of the present coup. To state more clearly would Aung Saan Suu Kyi hold the political currency and symbolism that she held in 1988? Would this coup give the people of Burma to reimagine their social and political leadership between the two straightjacketed opinions they have struggled with post 1988?

The democratic fabric of Myanmar has been damaged more than once, the deep courage that would take to challenge the military leadership today would be manifold specifically threats that generate from possibilities of Big Data and Surveillance State. “Within a system which denies the existence of basic human rights, fear tends to be the order of the day. Fear of imprisonment, fear of torture, fear of death, fear of losing friends, family, property or means of livelihood, fear of poverty, fear of isolation, fear of failure. A most insidious form of fear is that which masquerades as common sense or even wisdom, condemning as foolish, reckless, insignificant or futile the small, daily acts of courage which help to preserve man's self-respect and inherent human dignity. It is not easy for a people conditioned by fear under the iron rule of the principle that might is right to free themselves from the enervating miasma of fear. Yet even under the most crushing state machinery courage rises up again and again, for fear is not the natural state of civilized man.” (Aung San Suu Kyi, 1991). This is hoping that the courage is found by the people of Myanmar to resist and reinvent democracy.