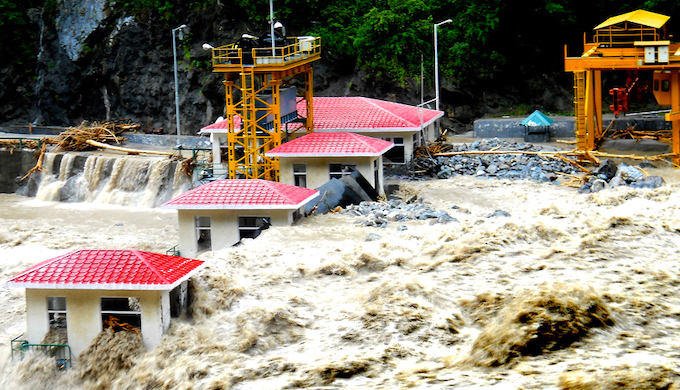 From the beginning of the 21st century, global warming, climate change have accelerated the melting of Himalayan snow leading to the debilitation of massive glaciers. Eventually, water levels are increasing every passing day.

Uttarakhand is yet again suffering from incessant floods due to the rise of the water level. All the low-lying areas in Srinagar of Uttarakhand's Pauri Garhwal have been deluged by the heavy rain.

The houses of the residents have been flooded. Alakananda's water is flowing over the top of some temples. It is raining continuously in and around Srinagar. In addition to Chamoli, the tide has risen in the Kali Ganga and Mandakini rivers. Many vehicles have been damaged on the way to Chamoli due to landslides.

It has been reported that due to the rise of Ganga's water level near Rishikesh, water has touched the idol of Lord Shiva. Various bathing ghats and temples have been submerged. Heavy rainfall causes roadblocks near Rudraprayag and the administration has warned the locals who reside just by the river. The rise in Alakananda's water level is becoming severe. Continuous rainfall from the past two days leads to a landslide near Rishikesh - Srinagar National highway this morning. Blocking road a huge rock and soil collapsed on National highway 58 in Byasi village. Restoration works are continuing to reopen blocked roads for commuters.

Also, some areas of Nepal have been submerged. People are using ropes and boats to cross the river. Firstly the prevailing Covid situation and nextly such disastrous incidents impact on the general public as well as the Government. Although the government has already started taking steps to restore Uttarakhand and its people.

More than a thousand deaths had been reported so far. In Kedarnath 75,000 pilgrims had got stuck and stranded due to flash floods and landslides. Although the administration had played a vital role from saving the people to providing relief to them, about 2.2 crores worth of relief had been sent to the distressed residers.

An Ongoing Brawl Between Uttarakhand and Tourism!

Baba Ramdev VS IMA (Indian Medical Association): from where it all started?