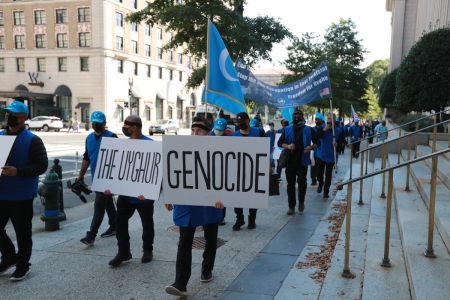 This is the tale of a modern Aushwitz that apparently nobody wants to talk about. After all it concerns the modern supergiant of China. For the ignorant ones, the Uyghurs are a Turkic minority ethnic group who constitute a majority of Chinese province of Xinjiang population. And this Muslim sect of Uyghurs in the Xinjiang province have been facing oppression from their own government for over 4 years now. They have been forcibly put into these "reeducation camps" where the natives are white washed and spoon fed Han Chinese morals, high on communism and atheism.

Since 2017, more than one million people have been subjected to such abominable conditions of intense surveillance, religions conversions and restrictions, forced labor, and mass sterilizations, if spared from straight-out detention.

Such grotesque treatment of innocent people for merely traveling to or contacting citizens from any of the twenty-six countries China finds ‘vulnerable’, such as Syria and Afghanistan. Even attending Azaan at mosques or violating China’s erstwhile ‘One Child Policy’ and proliferating texts comprising Quranic verses.So basically the crime of all these detained people is being a Muslim.

Therefore, the most shocking aspect of this issue is that while Islamic countries are protesting against the relatively secular laws brought out by liberal France, they are tight lipped on the horrendous accounts of Islamophobia against the Uyghurs in China. And many wonder why? Money. The geo-political monopoly or rather upper hand that China has in the middle East and Pakistan is more than enough to keep the safe-keepers of Islam mum. Meanwhile, the United States has maintained its tough stance by calling this Uyghur crisis ‘a genocide’, but the Chinese officials don't seem to budge on international sanctions and disdain.

This mask of hypocrisy donned by both the Organisation of Islamic Cooperation(OIC) and the Arab League alike has come under scanner. Especially after they chose to remain mum on the recent Israel- Palestine ceasefire. They are supposed to "safeguard and protect the interests of the Muslim world in the spirit of promoting international peace and harmony." But again, they turned a blind eye to the Rohingya exodus as well as the Uyghur crisis. Meanwhile, when France drafted laws on Islamic radicalism and regulating the use of Hijab in public spaces all this time standing strong on their 'laïcité' value, these same organisations roared but obviously for a lost cause.

China being an emerging supergiant has taken the Middle East by storm. And it's common knowledge that the region is a bustling finanicial hub thanks to its abundant oil reserves. So, as long as the cash keep flowing in from China, the nations there are content and prospering. And nobody would want to put a looming question mark over this win-win situation. No wonder, these Islamic organisations chose to keep their rage to themselves with pockets fully stashed.

China being a semi-isolated nation, has tried to contain the hideous reality of these conversion camps within the periphery of its borders. So, information on what actually happens in the camps is limited and all that we know about these camps is just the tip of the iceberg. The fled victims are the only source of information, describing the harsh conditions. Detainees are forced to pledge loyalty to the Chinese Communist Party(CCP) and give up on Islam all this time are made to chant praises of Communism.

Sexual abuse against the Uyghur women is believed to be widespread to impregnate their wombs with 'pure Chinese seed'. So many families have been torn apart where little kids are rendered orphan on finding their parents abducted. Ethnic chauvinism of this scale that the tortures inflicted upon individuals for the sake of the society as a whole is downright inhuman.

Hidden under the veil of vocational training centers, these camps have become the breeding spot for such inhuman activities happening right under the nose of the 21st century Human Rights watchdog. But that is the most ironical part for these international peacekeeping bodies have been reduced to watchers who can just watch as the horrors unfold and not actually do anything about it.

The Face of a Sincized Tibet