Walls of new ideas and thoughts: Transformation of the Government school in a village 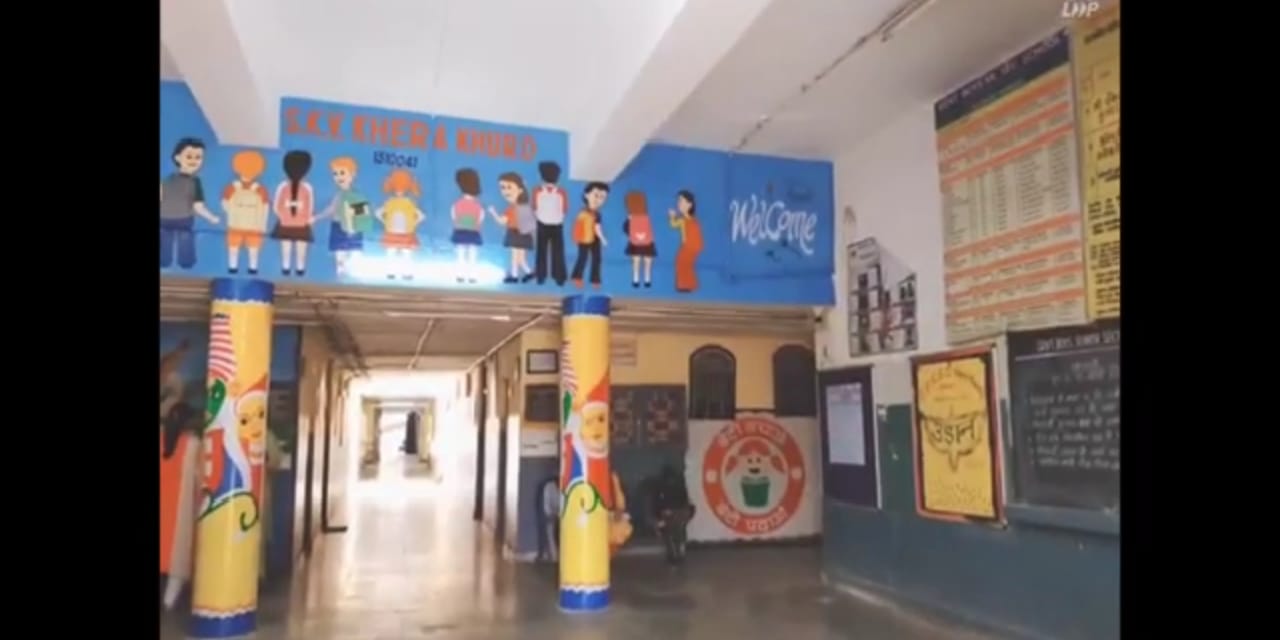 Khera Khurd is a small village located in the northwest district of Delhi. SKV Senior Secondary School (morning) and Government Boys Senior Secondary school (evening) are the oldest schools in nearby villages. It has been more than 50 years since this school serving education to many young girls and boys. Recently this school is quite popular in the locality for the transformation they had in past few years. This school has transformed itself from a two-floor white, plain building to five floors, with the best infrastructure, a red tile building. This new building is not the only transformation they had recently.

The transformation of this amazing school is quite fascinating. As they say behind every successful man there is a woman, but here behind this successful institution, there is also a woman, Mamta Sherawat.

While talking to 13-year-old Siddhant Mourya, a student of eighth class about the transformation of the school. He explained, that there is a drastic development in the last three years. He was admitted to school in third grade, he was not satisfied with the infrastructure and the teachers of the school but after the advent of their new principal Mrs. Mamta Sherawat who herself was a student of the same school, they can see the changes in the style of teaching and teacher responding to their questions.

I asked him “what is your aim in your life?” He answered that “I want to be an engineer”. He added that he feels that, with the support and help of his teachers he will be able to achieve his goal one day.

Although from the very far can notice new red building just in front of the old white building. Out of curiosity, I met a 17-year-old Himanshi student of the 12th class in the same school.

Himanshi is an extremely talented and hardworking girl. She was 7 years old when she got admitted in the third grade in the same school. While talking about her junior experience in the school, she was not quite happy. She mentioned the condition of toilets, they were not frequently cleaned and the gates were broken. But now there were clean daily and gates were changed.

When she was in her fourth grade there was no such thing called ‘entrepreneurship’ in his school, but these days, this entrepreneurship is quite helpful for the students to pursue their talents.

She talked about security in the school premises, she mentioned that previously there no camera security, no inspection, and just a white plain building. After the new policies, the whole system of cameras was set up, now every class has 2 cameras, inspection by teachers from the outside of school premise has been increased and those white walls were painted into colorful interactive, thoughtful quotes.

One thing that mentions about the school auditorium was that previously it was of no use, but after the transformation, it is frequently used for interactive activities for students.

Previously students of the primary section were neglected by teachers. Teachers were not that much focused or interactive with students. But after the formation of the new administration and strict culture, there is a change in the behavior as well as in the way of their teaching.

While talking about the senior secondary section Himanshi mentioned the new commerce section for the 11th and 12th standards. With this school is moving toward ‘English Medium’ from Nursery to 12TH.

As the school premise realizes that it is not easy for the student studying in Hindi medium science the very beginning to change herself/himself into English medium. They had arranged special English medium classes for these students.

About the uses of practical labs, Himanshi mentioned that previously they never went to labs, the existence of labs was for namesake, but in the last few years there were taken to labs for the experiment.

The main highlight for students is the new building, which is currently in progress and fortunately will be ready by the next session. This five-floor building has an elevator and kids are quite excited about that. It is not possible to explain the whole about the building yet, but hopefully by the end of the year.

The kind of excitement these young girls and boys have while explain about the school was quite fascinating to me. They were happy to have the same kind of education, which is served in the private schools. These changes had made to the number of parents to choose this government school over the high profile private school in the village. These young students are waiting for the reopening of the schools and their new building.

Urbanization of Villages with its impacts