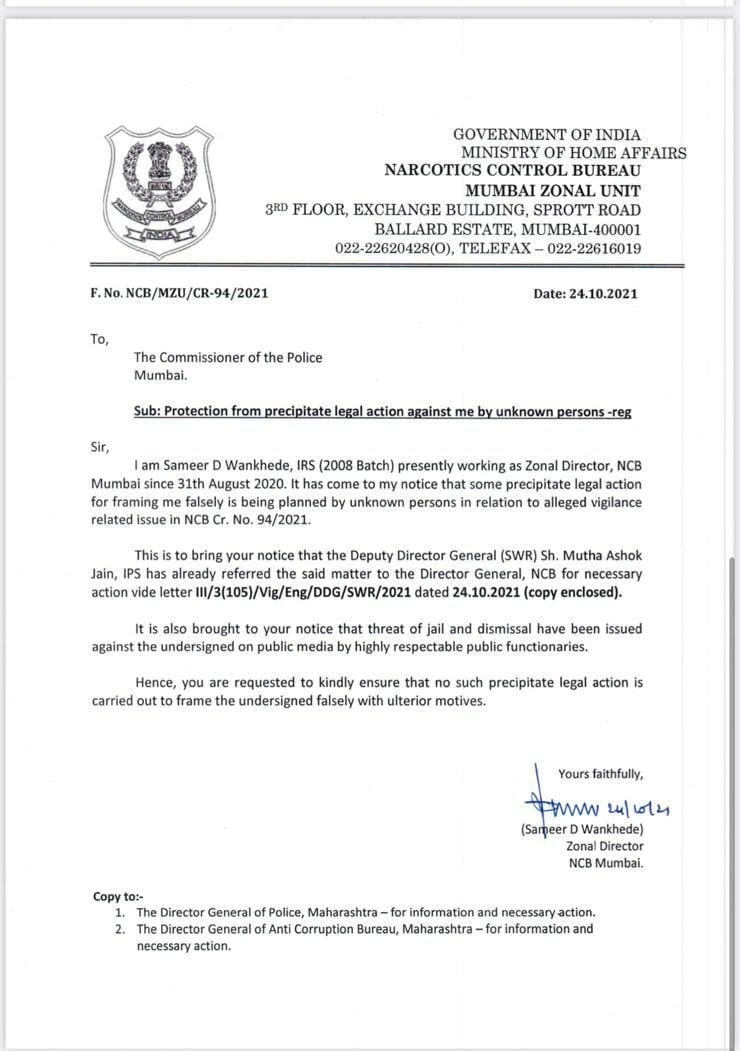 Senior Narcotics Control Bureau (NCB) Officer, Sameer Wankhede, has written a letter to the Mumbai Police Chief seeking protection against the threats of legal action. He has also expressed the fear of being framed falsely with some ulterior motives.

Sameer Wankhede is the zonal direction of NCB's Mumbai Unit. He is the leading investigative officer in Aryan Khan's case and also Ananya Pandey's questioning.

On 2nd October Bollywood celebrity, Shah Rukh Khan's son Aryan Khan was arrested and detained, in a rave party at Cordelia cruise ship, with 7 other people. He was suspected of being involved in a drug racket. Since then, he has been kept in custody and denied bail from the lower courts. Although no drugs were found on him, he is suspected based on his WhatsApp chats and possible links to an international drug racket. The leading NCB officer, in this case, is Mr. Sameer Wankhede.

Prabhakar Sail is the bodyguard of the NCB witness K.P. Gosavi. He accompanied Gosavi to the cruise ship on the raid night. Gosavi, whose selfie with Aryan Khan, after the latter got imprisoned went viral a few days ago, is missing at present. Prabhakar Sail is also an independent witness in the case. He shared a notarial affidavit claiming that Sameer Wankhede had demanded up to 25 crores to let Aryan Khan off. He mentioned overhearing a conversation between Gosavi and some Sam D'Souza. Gosavi was talking about extorting 25 crores to settle the case. It would further be adjusted to 18 crores, out of which Wankhede will be given, 8 crore rupees.

He also alleged the NCB of making him sign a blank panchnama. He also shared that he fears a threat to his life from Sameer Wankhede after Gosavi went missing suspiciously.

On October 24th, just hours after Prabhakar Sail's allegations, Mr. Wankhede wrote a letter to the Mumbai Police Chief asking for protection. He requested the Police Chief to "ensure that no precipitate legal action is carried out" against him by "unknown persons" with "ulterior motives" and intentions to frame him. Also, he added that "threats of jail and dismissal" were issued against him on "public media by highly respectable public functionaries".

NCB's statement on the issue –

"As he [Prabhakar Sail] is a witness in the case and the case is before the court and sub-judice, he needs to submit his prayer to the court rather than through social media if he has anything to say... Our zonal director Sameer Wankhede has categorically denied these allegations."

NCB filed a second affidavit in which they backed Wankhede, stating his "impeccable service record... replete with honesty and integrity".

Nawab Malik is a Nationalist Congress Party (NCP) leader and a minister in the Maharashtrian state. He has been denouncing the anti-drug agency, and their investigation on Aryan Khan, the Mumbai drugs-on-cruise case, and the international drug cartel. He has claimed the NCB to be "fake". He asserted, that, NCB was triggered by the central government to malign the Maharashtra government's name.

A day after Wankhede's letter to the Mumbai Police Chief, Nawab Malik posted a document related to Mr. Wankhede's birth on Twitter. He tweeted, "The forgery began from here" with the image of the article. He addressed the NCB officer as "Sameer Dawood Wankhede" pointing at his mother being a Muslim. Also, he has alleged Wankhede of being in the Maldives during the lockdown and targeting Bollywood celebrities for an extortion racket.

Sameer Wankhede said in his statement that sharing his documents is defamatory and an unnecessary incursion on his and his family's privacy. He said that the allegations are aspired to malign his, his family's, his father's, and his mother's name. He questioned the minister's motives in bringing his dead mother into the matter just because she was a Muslim. He added that the action of the Minister has left him and his family under tremendous emotional and mental pressure.

He also submitted an affidavit to the special court hearing the drug-on-cruise case. He mentioned that he has been personally targeted, because a relative of the minister, Sameer Khan was arrested in a drug case. Since then, there has been a personal vendetta against him and his family.

He also responded to the allegations regarding him being in the Maldives during the lockdown. He clarified that he had spent his own money on that vacation with his children, with proper permission.

Sanjay Raut's take on the incident –

Malik's colleague Sanjay Raut, from Shiv Sena (the party allied to NCP), commended the courage of Prabhakar Sail and asked the state government to protect him. He also announced to further take on the attack on NCB.

The NCB started investigating the case of bribery against Sameer Wankhede on Monday. The inquiry is carried out by the Deputy Director General (DDG) of the northern region in NCB, Gyaneshwar Singh. These developments took place when a court in Mumbai denied NCB's plea to dismiss Sail's affidavit. Gyaneshwar Singh has refused to comment on whether Wankhede will be continuing to lead the Aryan Khan case. He said it's too early to make such comments as the probe has just begun.

The reaction of Wankhede's family –

Sameer Wankhede's wife, Kranti Redkar, has denied all allegations against her husband. She said that he is not trying to frame Bollywood celebrities, and he deals with hard criminals. In 15 years of his service, not once have such allegations been charged against him. Kranti Radkar has shown real confidence in her husband and claimed that he will be proven innocent in the vigilance test.

Wankhede's father, Dnyandev Wankhede, also expressed his disappointment on the allegations imposed on his son by Nawab Malik. He too, mentioned the personal vendetta of Nawab Malik with his son because Sameer Wankhede arrested Malik's son in law Sameer Khan, and he was restrained, in jail for eight months.

Sameer Wankhede has vehemently denied all the allegations against him and plans to take legal actions as per the sources. The probe has begun against these allegations, and the truth will be disclosed soon.