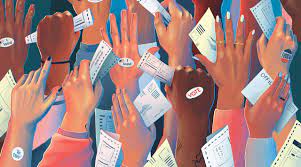 The results of the Georgia senate runoff are in, and the original vote is confirmed with more room on top. Raphael Warnock beat Herschel Walker for the second in months. He secured the Democrat lead in the Senate, at 51 seats for Democrat voting Senators and 49 seats for Republican Senators. This win has black Georgians incredibly excited. In a state that has been the epicenter of the civil rights movement in the past, Warnock was the first black senator to be elected in the state. He is likewise the first black senator to be reelected in the state. People on his campaign team have described the excitement surrounding his reelection to be comparable to the election of Barak Obama.

The exit polls in this election indicate that this excitement translates to the black vote in general. Warnock won the popular vote in the 19 Georgia counties with the highest populations of black people. Nationwide midterm exit polls by NBC indicate that 86% of the black vote was for Democrats, and 14% was for Republicans. This statistic holds true for this election, without taking into consideration the heavy voter suppression laws that have been targeting black and brown communities.

Other than the obvious trend of black voters preferring Warnock to Walker, the rest of the voting demographics were relatively stereotypical. The counties with larger populations which sit in and around the largest and most famous city in Georgia, Atlanta, mostly went blue. This includes the top six biggest population centers in the senatorial district in Fulton, Gwinnett, Cold, Dekalb, Chatham, and Clayton counties. All of these counties voted significantly for Democrats, with Cobb County being the lowest Democrat vote at 59.5%. This indicates that the black, Latino, and college-educated white vote followed the trend of voting more liberal than conservative.

Urban settings are also home to a younger population who also votes disproportionately more Democrat than Republican. According to NBC’s national exit polls, white adults aged 18-29 voted 58% in favor of Democrats, black adults aged 18-29 voted 89% for Democrats, and Latino adults aged 18-29 voted 68% for Democrats. Urban settings are also much more diverse than suburban and rural settings, which perhaps plays a more significant role in the partisan vote than age. Middle-aged white people are the only group of eligible voters that consistently vote more Republican than Democrat. White people aged 30-44, 45-64, and 64+ vote 54%, 63%, and 61% percent Republican respectively. No other demographic votes are majority Republican.

The percentage of the white population in a county isn’t a perfect indicator of how a county will vote, but in Georgia, it’s a pretty good indicator. Georgia has a long history of racism against black people that stretches to the modern day. As a result, it has a long history of civil rights movements in response to that racism. The Reverend Martin Luther King Jr. is a perfect example of this dichotomy. He is the most famous figure of the civil rights movement in the 60s and is from Georgia, specifically, Atlanta, a modern hub of black art, music, and culture. The church MLK grew up and preached in is the same church that Raphael Warnock became the senior pastor of in 2005, Ebeneezer Baptist Church.

It's these two conflicting histories that seem to make Warnock’s reelection in Georgia so exciting for his voters. Parts of Georgia like Atlanta and Athens have seen a black population carve out its right to call the state home and celebrate the historical victories that were gained by the civil rights movement in the state. But the racism of white European natives against black African Americans is and always has been perhaps the most significant problem in this country. This is especially true of states in the deep south like Georgia.

The most recent attempt at anti-black and brown racism is a senate bill facilitated by the recently elected Republican Governor Brian Kemp. SB- 202 or The Election Integrity Act had the effect of increasing voter suppression in Democrat-leaning districts. It enacts the kind of voting regulation policies that would’ve been illegal under the voting rights act of 1965 if it wasn’t gutted by the Shelby County v. Holder case in 2013. SB-202 changed how absentee voting is done, changed early voting rules, changed vote counting, changed the way that local election offices run, and changed the state election board.

The absentee and early voting changes play out in terms of dropbox and voting-by-mail restrictions. Fair Fight Action, a Georgia-based Hybrid PAC, created annotated notes on the harmful effects of the new SB-202 bill. In their section on dropbox restrictions, they say, “Georgia's new law completely eliminates over 300 hours of drop box availability relative to 2020. The law also significantly reduces the total number of drop boxes, using "uniformity" as an excuse to race to the bottom in voter access.” The 300 hours they talk about refers to ballot boxes now being unavailable after business hours and unavailable the four days after the early vote ends. The reduction in ballot boxes refers to the new rule allowing only 1 box per 100,000 voters and another rule requiring all ballot boxes to be inside a location.

Fair Fight Action’s general mail-in voting annotations are this, “Georgia's new law adds several new VBM burdens including: restrictions to absentee ballot applications that would have impacted 75K voters in 2020/2021 elections and new ID requirements that could impact over 200K Georgians.” The ballot request period is limited at both ends. The deadline for requests has been changed from the day of the election to 11 days before, and the earliest Georgians can now request a ballot is 78 days before the election. There are also more restrictions in the application process of vote by mail in the first place. If an eligible voter doesn’t have a state ID, there are a complicated set of bureaucratic steps ahead of them that will in no way be solved by a social security number.

All of these restrictions force affected communities to wait in incredibly long lines to do in-person voting, which Kemp knows will disincentivize a significant number of voters. For those who are still incentivized, Kemp added some horrifying restrictions to make their waits in line particularly hellish. Among other, human-right violating, precautionary measures Kemp enacted with sb-202, he added criminalization clauses on “line-warming.” Here are Fair Fight Actions annotations on line warming: “: Makes it a crime for volunteers or groups to hand water or snacks to voters in line… …Makes it a crime for *voters* in line to accept water or snacks from a volunteer or group. Bill later amended to allow an ‘unattended receptacle’ near line.” With this, Kemp was trying to dehydrate and starve the Warnock voters whose spirits he couldn’t break.

Despite these heavy restrictions people of all different demographics and races powered thru and elected senator Warnock as the first two-term black senator in Georgia’s history, and the twelfth black senator in American history. People are excited about Warnock’s win because it’s a legitimate victory for Georgian civil rights.