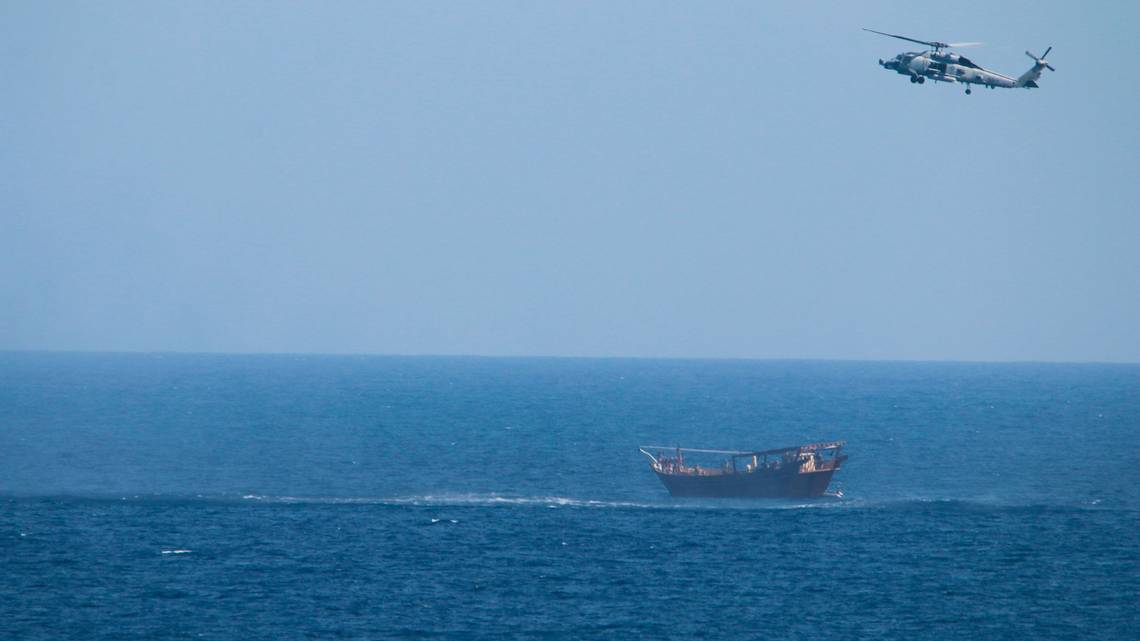 On Sunday 9th March 2021, the US Navy declared that it confiscated an arms cargo of thousands of assault rifles, machine guns and sniper rifles hidden aboard a ship in the Arabian Sea, likely bound for Yemen to support the country's Houthi rebels.

The capture, one of the several amid the year's long war in Yemen, comes as the U.S. and other countries try to end a conflict that generated as one of the world's worst humanitarian disasters. That arms shipment shows that the war may last for years.

USS Monterey discovered the weapons aboard. Navy described it as a stateless dhow, a traditional Mideast sailing ship, in an operation that began on Thursday in the northern reaches of the Arabian Sea Off Oman and Pakistan. Sailors boarded the vessel and found the weapons covered in green plastic and hidden below deck. 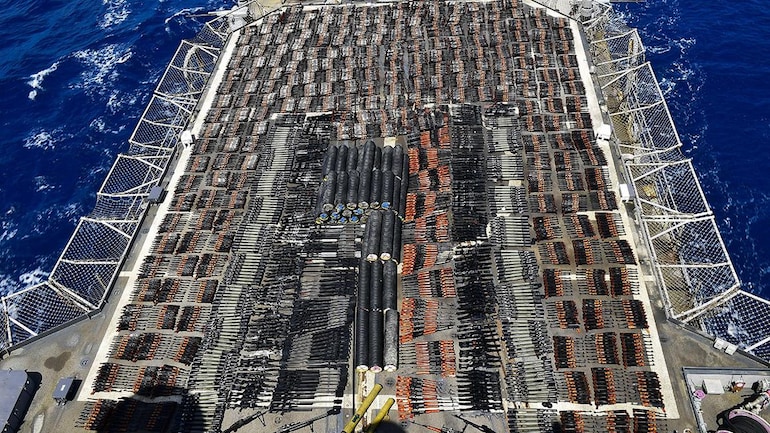 As the weapons were laid out on the deck of Monterey, the scale of the find came into focus. Sailors discovered nearly 3,000 Chinese types 56 assault rifles, a variant of Kalashnikov. They recovered hundreds of heavy machine guns and sniper rifles as well as dozens of advanced, Russian-manufactured anti-tank guided missiles. The shipment also comprised several hundred rocket-propelled grenade launchers and optical sights for weapons.

The Navy's Mideast base could not identify from where the weapons originated nor where they were bound to.  However, an American defense official asserted that the weapons matched those of other shipments bounded for the Houthis.

After the interview with the crew and material investigation onboard, the sailors deduced that the vessel arrived from Iran confirmed by the official who spoke on the condition of anonymity to discuss the ongoing investigation.

The seizure marks just the latest in the Arabian Sea involving weapons likely bound to Yemen. The seizure began back in 2016 and has continued intermittently throughout the war, which has seen the Houthis fire ballistic missiles and use drones later linked to Iran. Yemen is flooded with small arms that have been smuggled into poorly controlled ports over the years of conflict.

This recent seizure emerged to be among the biggest. Tim Michetti, an investigative researcher said that "the unique blend of material recovered by the USS Monterey appears to be consistent with the material from the previous interdiction, which have been linked to Iran".

Yemen's war began in September 2014, when the Houthis seized Sanaa and began a march towards the south to try and seize the entire country. Saudi Arabia, along with the United Arab Emirates and other countries, entered the war alongside Yemen's worldwide recognized government in March 2015. Iran backed the Houthis, who used to harras Saudi Arabia with missile fire and drone strikes.

The war has killed 130,000 people including 13,000 civilians slain in targeted attacks, according to the Armed Conflict Location and Event Project.

The war has seen atrocities from all sides. Saudi airstrikes using American-made bombs killed schoolchildren and civilians. The UAE paid off local al-Qaida fighters to avoid fighting and controlled prisons where torture and sexual abuse were prevalent. The Houthis employed child soldiers and indiscriminately lay landmines.

Since 2015, the U.N Security Council has imposed an arms embargo on the Houthis. Despite that, U.N. experts warn "an increasing body of evidence suggests that individuals or entities in the Islamic Republic of Iran supply significant volumes of weapons and components to the Houthis".