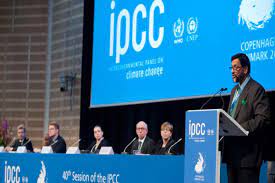 In 1988, the United Nations Environment Program commonly known as UNEP in collaboration with World Meteorological Organisation 1988 established a report known as the Intergovernmental Panel on Climate Change (IPCC). This report was designed to assess climate change through the world and the science regarding this. The latest news has shown that the IPCC Reports formulated in 2021 show concern and were described by “a code red for humanity” by Antonio Guterres, the Secretary-General of the United Nations.

Recently they released a 4000 long project-based document that statistically analyzed data to depict the falling situation of the climate in the world. The report expects a greater frequency in heat – waves, dangerous rise in the sea – levels, prolonged drought, and melting of huge glaciers.

The IPCC Reports talks about climate change and interprets the ever-evolving climate change situation. The temperature has already risen by 1.1 Degree Celsius since the end of the 19th Century. It further goes on to elongate that the temperature change could go up to a greater 1.5 Degrees in less than around 20 Years. The message from the climate change reports is truly for society to understand that unless immediate reductions are done to check emissions, there could be great catastrophic consequences.

These significant changes in reports have further indicated a greater intensity of droughts and more heatwaves. Recent Heat Waves in Canada and the US, devastating floods in Germany and China, and the wildfires in Turkey and Greece have shown credence of this analysis in the Report. With Sea – levels rising there is further harm on the Sustainable Development Goals as food and drinking water will become scarcer.

The reports by this UN Body, analyze that greenhouse emissions will need to peak by 2025. The importance of the emissions to peak at maximum by 2025 is that it would facilitate the net-zero to be achieved between 2050 and 2075. Statistical data also proves that the wealthiest 10 percent contribute around 40 percent of Emissions and are placed in the Top Ranks of Emitters Globally. These numbers of emissions are more than 10 times of the Poorest Nations around the world and clearly show how the policies are regarding climate change taken by alpha developed countries not working yet.

These reports are expected to show adverse effects for the Indian Subcontinent as well. It is expected that the Monsoon Cycle in India can be more erratic in the coming years. There are also reports of more occurrences of greater heat waves in the drier parts of India. These reports also present a greater warning for more landslides in the Hilly Regions of India as similar to the Uttarakhand Landslides in 2021. This is said to have caused a great deal of damage to the flora, fauna, and the civilians living in those areas.

The report had several takeaways of which the most important is how we as a human society have not devoted enough to the cause.  The unequivocal fact here is that human beings are the major cause of climate change due to the burning of fossil fuels such as coal, oil, wood, and natural gas. The increase in global temperature is the highest in around 100,000 years, and less than 5 percent of that has been due to natural factors. These reports have also led scientists to believe that these effects of climate change which would be felt in all corners of the world will only amplify in time overshooting the 1.5 Degree Celsius Mark.

The sea level has risen about 8 inches since the beginning of the 19th century and this rate has only gone on to increase at a margin of thrice the initial Value. Scientists have also exclaimed according to these reports that the ocean watermark will go up about half a meter over the 21st century if global warming rises to be capped at 2 Degrees. This would eventually narrow down the margin to nearly two meters by 2300 which would be hugely disastrous.

Apart from these, the CO2 levels in the atmosphere have been increasing at an alarming rate. The levels of Methane and Nitrous Oxide have been at trepid levels in 2021 than at any point in at least 800,000 years. Climate Studies experts have exclaimed that due to adverse climate changes, like heat, floods, and sea-level rise in coastal areas, several cities, and urban cities will face the brunt mostly in coastal areas.

Climate Change has been real and these IPCC reports have only extended the fact that Humans need to act unified and stand together to prevent it from creating greater catastrophes. Immediate reductions in greenhouse gases with the target to achieve Net Zero Global Emissions by 2050 would be highly crucial in the fight. Experts have suggested that if all nations start working to bring the emissions under the set target, the rates of Global Warming could decrease.

The world needs to cap Co2 and Ch4 emissions at quick intervals. The report has also suggested that warming around the globe could be controlled by a technique named negative emissions. It goes on to state that the planet could be cooled down by sucking out or all the carbon from the atmosphere which would effectively check the emissions and warming. These suggestions are still in progress in their execution stages as there are not many viable technologies available in today’s world. The times today are unprecedented however they are reversible to some extent. While it would take time for nature to heal, Human Beings must act together and not delay in their efforts. Climate Change is real and only the society in its entire spirit can work with cooperation to sustain the world.