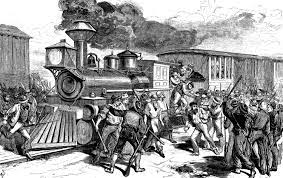 The language surrounding the potential large-scale railroad strike in the US seems to implicate it as some sort of natural disaster which needs to be avoided. The reasons behind this are understandable but ultimately troubling. Freight rail is the keystone piece to the US supply chain. The transport of key goods for overseas trade and domestic supply is dependent on freight rail for at least 28 % of its movement. Second only to trucking’s 40%.

This is according to 2019 data on the US Department of transportation’s website. Data from 2016 and 2017 shows rail bearing 15% of the weight of the supply chain, which indicates a 13% increase in freight rail usage in those two to three years. Likewise, it shows a decrease in truck usage. Seeing that the data is 3 years out of date, and there is no state-sponsored data given in 2021 and 2022, it’s necessary to assume that freight rail usage has gone up since 2019 based on the previous trajectory.

However, this assumption is not unfounded, just not backed by any recent reliable data. It is, however, backed by environmental initiatives that deemphasize freight by truck, and emphasize freight trains. Not necessarily because trains in the US are so much more environmentally friendly than trucks as they are now. They are more friendly overall, but they still rely on diesel fuel. But rather for their potential to be much more environmentally friendly in the future. Converting a train to electric is infinitely more convenient than converting a fleet of trucks.

In any case, the twelve railroad unions involved in this strike, represent 115,000 railway workers, dispersed across every major rail corridor of the US rail system. So, a strike would do significant damage to the efficiency of that 28% or more which represents the US freight rail supply chain contribution.

On top of that, the timing couldn’t be worse. The Christmas season is about to start, and American people are consuming double what they were in 2021, and quadruple what they were during covid. Likewise, gas prices are finally starting to drop since the start of the war in Ukraine. A strike would halt the American ability to consume and once again raise gas prices.

These reasons are almost certainly things Biden is taking into consideration with his “aversion” of the railroad strike. Biden is, somewhat successfully, bringing the country back to a state of relative normalcy. The world was in a deep state of depression during quarantine, and US citizens were perhaps the least equipped to deal with the pressure covid caused. Hence the increased consumption. Assumedly, it is a trauma response to formerly not having the ability to consume.

Biden wants desperately to keep up this normalcy, to keep morale up and away from the depression that the pandemic incited. He is perhaps, so inclined to keep morale up, that he has gone back on one of the promises he made at the beginning of his presidency. He promised to be the most pro-union president that this country has seen in years. But frankly, he seems to be pushing a bad deal on these railroad labor unions.

The railroad unions had four requests and one main request in their threats to strike. They wanted an update on the oppressive rules and scheduling they work under. They want a better quality of life, which falls under scheduling issues. They want the railroad companies to increase their staff and incentivize staff to stay longer. Most importantly they wanted one very simple thing, paid sick time.

They got an update to the oppressive scheduling rules, but a somewhat offensive one. Under the old scheduling rules, railroad workers were not allowed any time off for routine medical visits. Were they to cut into their work schedule to make time for a doctoral check-up, they would lose scheduling points and risk a 10-day suspension or termination. Now railroad workers are allowed a doctoral appointment. But it must be scheduled 30 days in advance on a Tuesday, Wednesday, or Thursday. Certainly, an improvement, but still not even close to a solution.

The quality-of-life issue is also a scheduling issue. Due to the points systems and on-call work weeks, it’s unclear when exactly the workers will be called into work and if the time that they’re called in is inconvenient, they will lose points if they don’t show up. They don’t have set schedules every week, so they literally don’t know what days their free days are, and therefore have no ability to make plans around those free days. This leads to situations where a railroad worker is punished for a situation that is essentially out of their control. For example, an emergency, a family outing, or a doctor’s appointment, are all reasonable excuses to get out of a normal job’s day work; but such excuses would warrant punishment under the current railroad scheduling rules. More lenient punishments have been agreed upon in the recent bill, but no improvements to scheduling have been made.

There have been no concessions made on the railroad companies increasing staff, which is problematic because many of the old freight railroad workers are leaving. The Federal Surface Transportation board chair, Martin Oberman, claimed in April 2022 that the railroad workforce had shrunk by 29% or 45,000 employees since 2016. So far nothing has been done to incentivize a new workforce and the bill doesn’t imply any sort of plan for doing so.

All of these reasonable requests aside, the main thing that the railroad worker union asked for was paid sick days. They very simply want the workers to be able to not go to work when they’re feeling sick and not have to worry about living expenses like rent and food. However, this was also not added to the bill. It almost was though. It was passed through the house but didn’t meet the 60-vote threshold in the senate.

So, in other words, the one main thing that they set out in this process for, paid sick days, was not given to them for their work. They were given other things. A pay raise, and some revisions to scheduling policies, but they weren’t given what they asked for.

The main issue with considering this strike as something to be “averted” is that it discounts how minuscule the progress truly was in this case. These railroad workers are being worked unfairly. They do not have the workers’ rights that they should naturally be given. They’re worked till exhaustion, and treated like resources, with no utility outside of their ability to continue working.

It would be nice to say that there’s a good reason for these horrendous working conditions, but the only real excuse these railroad tycoons can make is a lack of staffing. Which would be resolved by better pay and better working conditions for the workers. With more incentives for this obviously pivotal American workforce, more workers would come in.

The railroad corporations also can’t use money as an excuse. As was said above, freight rail and passenger rail is an exponentially growing industries in recent years. The two major railroad companies, the Union Pacific and Central Pacific, have seen record profits since 2020. Despite this, the recent raise from the threat of a strike, is the first general raise railroad workers have received in some time. This led to people quitting railroad work in large numbers, and that led to the oppressive scheduling policies that are the source of this strike. The railroad companies have no excuse to treat their workers as badly as they are treating them, but they continue to treat them horribly nonetheless.

To leave the situation as it is now will not avert a crisis but rather sweep it under the rug. Plenty of American families will now be able to celebrate Christmas the way they did before the troubling times of the recent past. But those who work to make Christmas normal again, will not have a normal Christmas. They will probably be working.

“The Three Amigos” Reunite to Discuss the Future of North America