Why Odisha Chief Minister is in no hurry of receiving the central government’s relief package amid Cyclone Yaas? 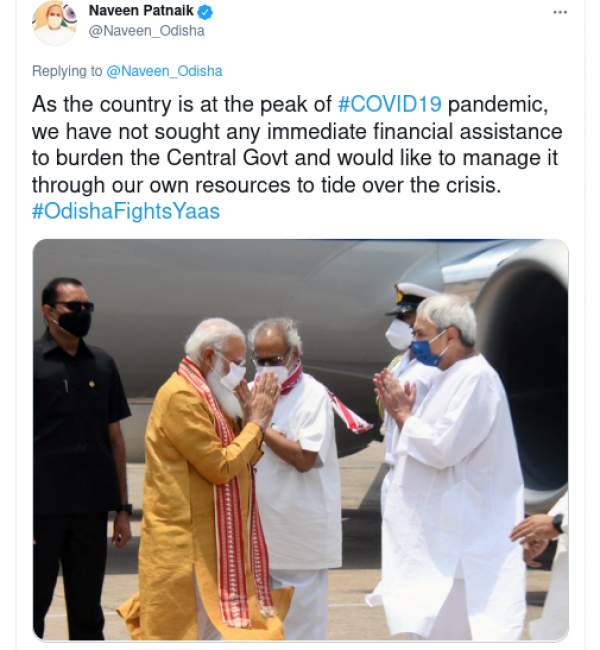 Odisha witnessed the landfall of very severe cyclonic storm Yaas which was first monitored by IMD on May 23. In 1999, the state observed the death of over 10,000 people due to a super cyclone which proved to be one of the worst natural disasters in India. But this time only 3 deaths have been reported so far. This is the result of continuous efforts made by various departments ODRF, NDRF, fire service team, etc. Apart from Odisha, West Bengal and Jharkhand were also on high alert. On Friday, PM Narendra Modi announced ₹500 crores to Odisha as financial assistance during this tough time while CM Naveen Patnaik asserted that he was not looking for any immediate assistance and demanded funds for long term mitigation measures such as power systems that are resilient towards disasters and protection from coastal storm surge. CM expressed his will to manage the current crisis through the state’s resources. But how Odisha managed to spurn immediate assistance from the center is something that other states need to understand.

In the 2021-22 budget, Odisha allocated ₹3050 crores for disaster management which included ₹2,139 for the SDRF fund and ₹911 crores under the NDRF fund. This has been proved during the last few years that the state is committed to the strengthening of its preparedness and mitigation measures. Odisha managed to evacuate 710,000 people from cyclone-prone areas with the help of various response forces. A total of 35 special as well as hourly bulletins were published from May 19 to May 25 by IMD, Bhubaneswar on Odisha State Disaster Management Authority’s website(https://www.osdma.org/).

Odisha has learned from its past experiences as it is a sitting duck for extreme cyclones. PK Jena, Odisha Special Relief Commissioner said that the government alone cannot mitigate during a super cyclone so the community proved to be the first responder. Various community institutions aimed to train community was set up during the last few years, especially in villages. In June 2020, the state government asked for a ₹20,000 crores package from the central government to strengthen mitigation measured and develop disaster resilient infrastructure. Faced with a dual-threat from the cyclone and the Covid-19 pandemic, the restoration teams strengthened the doors and windows of Covid designated hospitals; sufficient drugs, injections, and consumables were stocked in hospitals; adequate oxygen cylinders and buffer stock were maintained; and food was arranged for patients, doctors, and paramedics inside the hospital. As a result, no untoward incidences were reported at any of the Covid hospitals in the cyclone-affected districts.

Naveen Patnaik is one of the longest-serving CM and he has been in power since 2000. In a federal system, there should be an understanding between the state and central government. Mr. Patnaik’s decision of not burdening the centre amid this pandemic sends a message of solidarity to all states who are demanding immediate relief from the government. Mamta Banerjee seeks ₹20,000 crores of financial assistance from the PM while only ₹500 crores are allocated jointly to Jharkhand and West Bengal.

Odisha marked only 3 casualties which is the result of various schemes and training workshops implemented by NDMA and SDMA in the state. “Aapada Mitra” – the scheme implemented by OSDMA trained community-level volunteers and ensured relief and rescue measures at the block level. All volunteers were provided with standardized training modules and mandatory life-saving skills. This proved to be of extreme help during cyclone Fani in 2019. Odisha's disaster management strategy revolves around community-based catastrophe risk reduction.

Apart from that, coordination between NGOs and government proved to be an exceptional tool in relief, response, rehabilitation, rescue, and mitigation. Odisha State and OSDMA are well-known for setting the bar for disaster response in the country, with a long history of effectively reacting to a variety of disasters.

Though CM Patnaik refused immediate help he is committed to building various disaster-resilient structures for long-term mitigation. The state government wants to lay underground cables in urban areas so that the transmission of electricity is not disturbed during various catastrophic events.

The stakeholders also want an uninterrupted supply of disaster-resilient electricity in rural areas. Another demand that is pending for a long time is the conversion of 1.7 lacs kaccha houses to pucca houses that are cyclone resilient. Further, raising embankments to 6.5 meters from sea level to reduce the intensity of high tides during the cyclone. All these measures will prove to be a one-time investment and reduce financial loss faced by the state every year. Odisha cannot completely avoid cyclones so these steps are the need of the hour to save the lives of people who are relocated every year due to lack of proper infrastructure. The centre is all set to deploy an inter-ministerial team that will visit affected areas based on which further funds will be allocated.

India is a signatory of the Sendai Framework for Disaster Risk Reduction 2015-2030 based on which the National Disaster Management Plan (NDMP) 2016 was formed. This plan is committed to make India disaster resilient and reduce the loss of assets and lives. This plan covers prevention, mitigation, response, and recovery. The strategy utilized in this national plan includes the four Sendai Framework priorities into the planning framework for Disaster Risk Reduction under the five Thematic Areas for Actions for each hazard i.e. understanding risk, Inter-Agency Coordination, Investing in Disaster Risk Reduction – structural as well as non-structural and capacity development. Committing to all the objectives provided in the framework and NDMP, India is on its way to becoming a disaster-resilient nation, and states like Odisha will be not left behind.