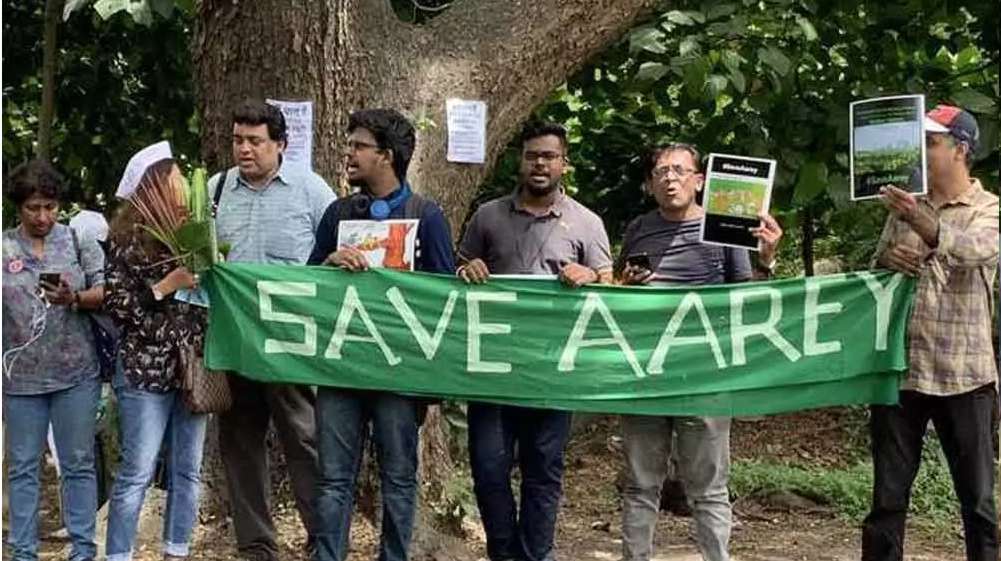 The very first decision taken by Devendra Fadnavis, after being newly elected as the Deputy Chief Minister of Mahrashtra, in the Eknath Shinde government, was to order the government’s legal team to inform the Bombay High Court that the state would relocate the building of the metro car shed to Arey Colony, resulting in a protest by several environmental as well as political activists, including the party workers of AAP and the Shiv Sena. The former Chief Minister Uddhav Thackeray had previously ordered the relocation of the metro car shed from Aarey to Kanjumarg.

In 2019, the BJP led Maharashtra government had planned to build the car shed by cutting down the Aarey Forest, the final decision was then taken by the Tree Authority which falls under the ambit of the Brihan Mumbai Municipal Corporation (BMC). The tree authority said in its statement that out of the 4 lakh trees in Aarey forest, around 2,400 would be cut and 3 times of the deforested trees would be planted at some other location. While the decision seemed to be a legitimate one, controversy arose when certain environmentalists, who were a part of the tree authority’s meeting to make such a decision, claimed foul play saying that their vote of ‘yes’ to such a decision in the meeting was deliberately misconstrued. Many environmental activists and local people moved to court challenging the Tree Authority’s decision, however the Bombay High Court dismissed the pleas of the petitoners and within 24 hours of the decision, the Mumbai Metro Rail Corporation Limited which is executing the project, fell 2000 trees in the forest of Aarey. This sparked a widespread protest in several parts of Mumbai, under the banner of the ‘Save Aarey Campaign’. The Fadnavis Government had to invoke Section 144 of the Code of Criminal Procedure (CRPC) and certain protestors were also arrested, who were later released on bail.

Aditya Thackeray has strongly opposed the overnight cutting of 2000 trees, in Aarey and as soon as Uddhav Thackeray assumed office post being elected as CM in 2019, he ordered for the scrapping of the Aarey project and said that the shed would be constructed at the salt pan land at Kanjumarg instead. The Kanjumarg site was not considered feasible for the development by the Fadnavis government of the shed owing to the additional costs which had to be incurred and also because of certain litigation which gave the land a disputed title.

Why is the Aarey Forest so important?

Aarey Milk Colony is an 1800-acre urban forest in the suburb of Mumbai’s Goregaon district and is home to over 300 species of flora and fauna. It is within the eco-sensitive zone of Sanjay Gandhi National Park and is considered to be one of the few green spaces left, in the densely populated metropolitan city. Some even refer to the forest as the green lungs of Mumbai. This is because the Arrey forest is an eco-system within itself, along with the densely populated trees which provide with fresh oxygen to breathe, the forest is also home to many endangered animals. It has a wildlife corridor which consists of 9 leopards, 76 species of birds, 16 mammals, 80 species of butterflies and 38 types of reptiles. The forest is also home to about 10,000 people who live in 27 tribal hamlets. The original inhabitants of the forest are worried about getting displaced. Tribal activist Prakash Bhoir in an interview to Question of Cities, which is an online journal dedicated to urbanisation, ecology and social equity, said that “Our hamlets fall on what has been declared as forest. Though the hamlets themselves were left out of the forest demarcation, we don’t want to be ousted from the land we have been cultivating for years only because it has now become a ‘forest’.”

In addition to that, the part of the forest where the metro shed is supposed to be created is the floodplain of the Methi River, in the Salsette Island of Mumbai. Geographically, it is definitely not advisable for any kind of construction be undertaken on a flood plain. This is because if the shed is built, any instance of an excess in rainfall would result in a manifold increase in the chances of flooding in that particular area, this point holds great importance especially in a city like Mumbai, where flooding of roads is a very common sight, every monsoon.

The great environmentalist, and pioneer of the Chipko Movement, Sunder Lal Bahuguna, once said, “The solution of present-day problems lies in the re-establishment of a harmonious relationship between man and nature. To keep this relationship permanent we will have to digest the definition of real development: development is synonymous with culture. When we sublimate nature in a way that we achieve peace, happiness, prosperity and, ultimately, fulfilment along with satisfying our basic needs, we march towards culture.”

It is this philosophy of the environmental champion that needs to be kept in mind by the governmental authorities, in the course of planning developmental programmes. Protecting the Aarey colony from massive deforestation shouldn’t just be the job of activists and citizens. In fact, it should the responsibility of the state government as well as the municipal corporation to plan Mumbai’s expansion around bio-diversity spots such as Aarey, and not on them.

While it might be true that Mumbai could have a better infrastructure at the cost of threatening the ecology of the Aarey Colony, under no means can it be considered as justified. There is no doubt of the fact, that a metropolitan city like Mumbai, desperately need the Aarey Forest; how soon will the state government and municipal authorities realise this, is a question which is yet to be answered.