A bully is now becoming a monster 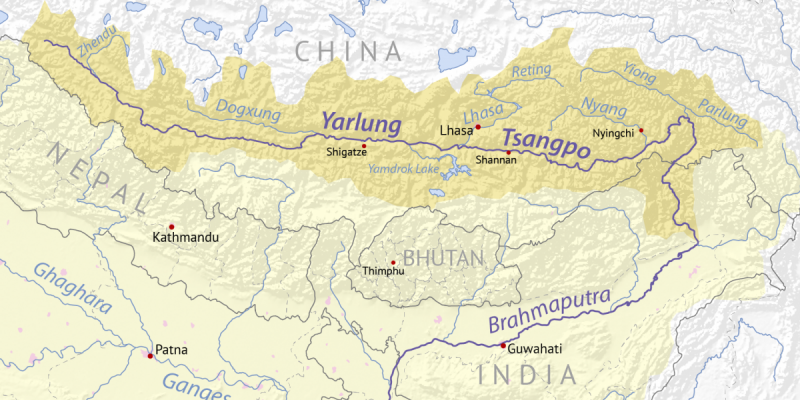 "China said that they were building a dam on Brahmaputra's (known as Yarlung zangbo in Tibet) tributary absolutely like Three Gorges Dam or even larger than that."

China's idea to build a dam on the Brahmaputra bigger than the Three Gorges Dam is not only controversial but also very dangerous for the whole Indian subcontinent. There is no doubt that the Three Gorges Dam is genuinely a marvellous man-made project. It not only generates 22500 MW power but is also helpful in flood control and navigation. But there is another aspect of this issue, and that is the dangers of this dam. One of the biggest controversies around the Three Gorges Dam is the amount of damage it does to the environment. It is said that 70% of China's fresh water is polluted, and the dam could be making it a lot worse. Over 265 million gallons of raw sewage is deposited in the Yangtze river every year. Only this, but it triggers the mass migration around that area. When the project was constructed, more than 1.2 million people were forced to relocate and find new homes, and it's still happening today. Erosion of the reservoir had caused landslides. The dam is so massive that it has slowed down the rotation of the Earth, which results in increasing the length of a day by 0.06 microseconds. And there are also cracks in it so that there is always a danger of a huge flood and earthquake in that area. If it can become such a risk there, then such kind of infrastructure can bring doom to the Himalayas and the whole Indian subcontinent.

Why is it a concern for India?

The first problem is that there have never been any bilateral or multilateral treaties on treaty above the water of Brahmaputra, due to which no matter how much water someone uses, no one can say anything to anyone. After the dam is built in the future, the problem may come later that China will stop a lot of water. It results in a drought in the areas of the lower stream like Assam, Arunachal Pradesh and Bangladesh. On the other hand, China can bring floods at any time in an area which is also a security threat for India. China can use it at the time of war as a weapon or use it for negotiations. It can affect the irrigation systems in lower stream areas. Last year, a US government-funded study showed that a series of new dams built by China on the Mekong river had worsened the drought affecting downstream countries like Thailand and Malaysia. However, China disputed the findings. According to a report on Institute for Defence Studies and Analyses (IDSA), China completed the Zangmu Dam (510 MW capacity) built on the upper reaches of the Brahmaputra in 2010. Three more dams at Dagu (640 MW), Jiacha (320 MW) and Jeixu are under construction. The work on Zam hydropower station, which will be the largest dam on the Brahmaputra.

The second problem is that, with the construction of this dam, China will aggressively try to show their supremacy over Arunachal Pradesh. China will then write in every document that the river passes through the southern part of Tibet, which is illegally occupied by India (Arunachal Pradesh in India). And if this dam is bigger than 3 Gorges Dam, then it will be world-famous, and that term will also be famous 'Illegally occupied Southern Part of Tibet'. Some say it is part of a state-sponsored long-term preparation for a mass migration of Chinese migrants into the Kongpo region for permanent settlement. Such an event could cause irreversible damage to the local ecosystem. It is also seen as an attempt to diminish local Tibetan identity and significantly destabilise the hydrological balance across northeastern India. Some even said that the Chinese government is trying to change the demographics in its favour, resulting in a migration of illegal Chinese migrants in Arunachal Pradesh and Northeastern parts of India. A Chinese-dominated population in the region could give the People's Liberation Army a chance to grab land and dominating people's opinions.

The third problem is geography. The Himalayas are a hilly region that is an earthquake-prone area. Additionally, it is also not good for the ecosystem of that area. In 2001, an artificial dam in Tibet collapsed and killed 26 people and damaged property of Rs 140 crore along the river Siang in Arunachal Pradesh. Because of this incident, the Siang river, because of which many villages of Arunachal Pradesh used to live their lives, today the water of that Siang river is black as coal.

After the Indo-China face-off in Ladakh, India has started focusing on these dams in the country's eastern side. India is considering a plan to build a 10 gigawatts (GW) hydropower project on the Brahmaputra river. "The need of the hour is to have a big dam in Arunachal Pradesh to mitigate the adverse impact of the Chinese dam projects," T.S. Mehra, a senior official in India's federal water ministry. He further added, "our proposal is under consideration at the highest level in the government," adding the Indian plan would create a large water capacity to offset the impact of Chinese dams on flows.

On March 21, in her public rally in Nazira, Congress general secretary Priyanka Gandhi Vadra slammed the BJP government for not objecting to China building a dam on the upper reaches of the Brahmaputra in Tibet. She said, "the Prime Minister has campaigned in Assam several times but said not a word on this vital issue. He did not even try to prevent China from constructing the mega dam."

"According to me, it should be an election issue as many people's lives and their homes are also dependent on it. People remember the country for votes at the time of election, but never think about the country in a far-reaching way as to what will happen tomorrow if they do not speak today."

1 year, 1 month ago by Shivani.Pillai