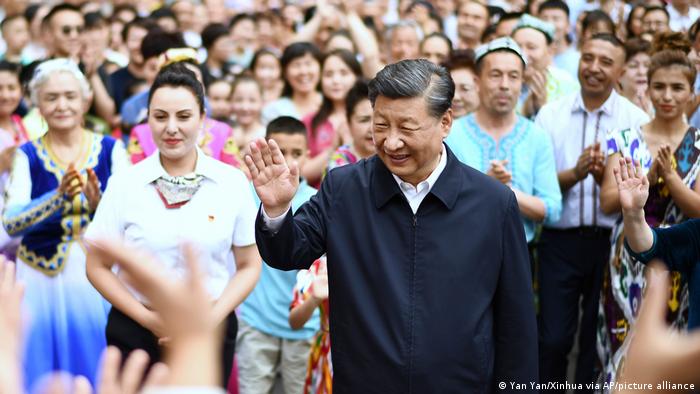 Last week, amid rising concerns over China's detention of thousands of Muslim ethnic minorities, Chinese Premier Xi Jinping paid an unannounced visit to China's Northwestern region, Xinjiang. The four days President's visit aimed to project Xinjiang as a stable and united region under his administration. Moreover, the visit showed no sign of withdrawal from his popular 'Xinjiang policy' that has come under sharp criticism from the West. According to many human rights organizations and activists groups, Xi's 2014 'Xinjiang policy' set in motion drastic measures in the region- heavy surveillance, transfer of labourers to other provinces, indoctrination, mass arrests and forceful identification of Uyghurs and other Muslim ethnic groups with the ideologies of the Chinese communist party. Furthermore, Xi's second visit, along the same path, emphasized the assimilation and Sinicization of the Uyghur and other minorities in the region.

But why is Xinjiang so important for Xi?

The Xinjiang Autonomous Uyghur Region (XUAR) lies in the northwestern corner of China. It is the only Chinese region that encompasses a Muslim majority population. Moreover, Xinjiang's population contains fifty-six ethnic groups in which Kazakhs and Uyghurs constitute 6% and 46% of the respective population. The Kazakhs and Uyghurs communities are ethnically Turkic, primarily speaking their languages and following their inherited beliefs and customs.

Xinjiang plays a significant role in China's world hegemonic ambition. Xinjiang, a predominately desert region, encompasses 17% of China's territory. In addition, the Westernmost region contains one-fifth of China's natural gas and oil, 40% of its coal and much of its gold reserves. Xinjiang is a gateway to Europe, the Middle East, Afghanistan, Turkey, and Iran.

Or in other words, Xinjiang's rising geopolitical significance can be accredited to three prime reasons- China's new policy focusing West, the region's rich natural resources and the bordering nations, especially those rich in natural resources, such as Kazakhstan and the Russian federation.

In addition, the region acts as a vital node in China's One-Belt-One-Road program. In 2013, Xi Jinping announced the BRI initiative to connect Europe and Central Asia with China. And as per China's Xinjiang policy, the region should act as a fulcrum of trade with central Asian nations. Moreover, Xinjiang should play a significant role in the Eurasian corridor as it homes six of eight European- Sino railways.

However, Xinjiang's proximity to nations like Afghanistan and Pakistan, which, according to former US and NATO commander General Nicholson, host numerous terrorist organizations in Afghanistan, has proved to be a significant concern for the Chinese leadership. Given the region's sensitivity, the Chinese leadership has placed extreme importance on stabilizing and securing the region with stringent measures.

In 2014, the administration introduced the 'Grid style management system' that actively surveys even the region's most remote areas. In 2017, the Population Registration program was introduced, which collected the DNA and Iris samples of all the population aged between 12 and 65 to form an Individual's identification number in the name of medical reports. However, the kind of surveillance and security system China has on the people of Xinjiang violates the International Human Rights standards. Moreover, if the Human Rights Watch's report is believed, China can be held for crime against humanity.

Many reports have documented China's crimes against humanity, deprivation of liberty and imprisonment, persecution of a specific religious or ethnic group, murder and universally recognized inhumane acts towards Xinjiang's ethnic minority groups. For instance, earlier this year, a cache of photographs and documents was leaked by a German-origin anthropologist 'Adrian Zenz' that shed new light on the brutal methods used by the Chinese authority on the Uyghur-Muslim community in so-called re-education camps.

The leaked records exposed the government's plot to target the ethnic minorities for practising their culture and religion in the name of state surveillance and vocational training centres. The record also suggested that most people in these camps have never been charged with a crime but have been targeted for reasons including attending mosques, travelling to nations China considers sensitive such as Afghanistan and turkey and sending Qur'anic verses. However, the Chinese administration dismissed the leaked documents as 'concocted' by anti-China forces in the West. Moreover, the Chinese administration claimed that Xinjiang's issues are not concerned with human rights or religion, as the West widely proclaims, but about combating separatism, violent terrorism, and de-radicalization.

According to government officials and experts, around two million Uyghurs and other Muslim minorities, including Uzbeks and Kazakhs, have been detained in the internment camps since April 2017. Furthermore, as per the reports of the New York Times, inmates of these internment camps go through years of interrogation and indoctrination aimed at transforming them into groups of loyalists of the Chinese Communist Party. However, the Chinese widely dismisses such accusations and consider these camps a hub to curb extremism, advocated under the United Nations plan of action to prevent extremism. Chinese authorities assert that these camps facilitate compliance with international resolutions for counterterrorism principles, including the United Nations' global terrorism strategy. Moreover, during the second visit, the leadership credited the de-radicalization and counterterrorism measures for maintaining stability in the region for the past four years.

Despite Beijing's constant attempt to portray Xinjiang as a beautiful homeland of diversity, the evidence of China's draconian measures keeps mounting. Xinjiang Files 2019, Human Rights Watch Reports 2019, Leaked documents 2022, CNN reports 2020, The Chief Witness book by Sayaragul Sauytbay, and hundreds of survival testimonies hint in the direction of China's alleged 'genocide'. The time has come to end these massive humanitarian law violations. However, due to China's rising economic power, even the Islamic nations have chosen not to heed the cries of Muslim minorities. These so-called 'Islam- protecting nations' have chosen economy over humanity. Saudi Arabia, Pakistan, and all the Islamic nations except Turkey have declared China's breakdown as an internal matter. Now, all eyes rest on the West, especially the US, to rescue humanity. But the central question is 'Will America be able to set aside its economic rivalry for these minorities?

The idea that the article prescribed indeed paved a way towards a different perception.