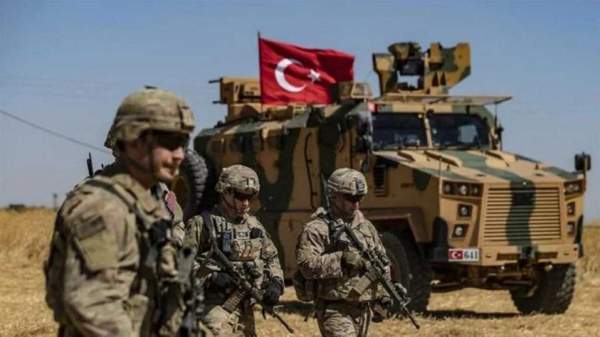 On the 17th of April, the armed forces of Turkey initiated a blatant invasion of Iraqi territory on the basis of suppressing Kurdish militant groups which operate out of Iraq's autonomous Kurdish region. It went largely unnoticed by a media whose chief interest at the moment is understandably in Ukraine. The full-scale war which rages in Ukraine is captivatingly brutal; the sheer ferocity of the fire from that war naturally absorbs all the oxygen of attention around it.

Turkey's most recent aggression against its neighbors is comparatively tiny, and what's more, it is nothing new or surprising. The Turkish government conducted military operations against Kurdish positions in northern Iraq in 2020, with assistance from the regime of Ayatollah Khamenei. They did so again in 2021, a limited function that eventually ballooned into an 11-month-long occupation and territorial acquisition campaign. Prior to that, they conducted a military operation in Iraq in 2008.

Turkish incursions into northern Iraq, or even Syria, have become so routine that one should have learned by now to anticipate them like rain. Just as the prudent man would carry an umbrella, a more prudent US administration would have addressed this flagrant violation of international law in the preceding number of years and would have prepared for this most recent offense by at least raising the issue at the United Nations Security Council.

A UN buffer zone already divides the island of Cyprus, itself a member state of the European Union and similarly a victim of Turkish aggression. The northern portion of this island is still under illegal occupation by an illegitimate political body, the Turkish Republic of Northern Cyprus, supported by a garrison of tens of thousands of Turkish regular troops. Nonetheless, for nearly 40 years, this status quo has been maintained by partition and diplomacy, holding at bay the spasms of ethnic violence which characterized much of Cyprus in the 1960s. The partition does not strike one immediately as a resounding success, but even an undignified status quo is preferable to race murder and war. There is no good reason why this cannot be replicated in northern Iraq and little excuse for why the Biden administration has failed to respond.

It is often claimed that it is impossible to suspend the membership of a NATO state from the broader organization, but this is not entirely accurate. Turkey has emerged as a hostile and recalcitrant force in its region in the last five years. Its membership in NATO has done little to prevent it from committing crimes of aggression, escalating tensions in the Aegean with Greece and spiraling into a chauvinist frenzy under the leadership of Recep Tayyip Erdogan. The mere fact that Turkey was willing to threaten its military ally, Greece, should be cause enough to eject the Turkish from NATO. This most recent offense against international law gives that prospect a more forceful urgency.

The text of the NATO treaty carries no mention of expulsion but make no mistake; this fact does not preclude the possibility of such removal. To substantiate an eviction, we turn not to the NATO treaty but the Vienna Convention on the Law of Treaties. The Vienna Convention is a fundamental pillar of the international legal order. It lays out the legal basis for international agreements between states, how these agreements are to be interpreted P in international arbitration forums, and how these treaties can be subsequently amended. It is, in effect, the 'treaty of treaties,' an explicit codification of the principles of Customary International Law.

Article 60 of the Vienna Convention covers "termination, suspension of the operation of a treaty as a consequence of its breach." It specifically focuses on whether or not there was a "material breach" of the treaty's terms. Article 60 (3)(a) defines a material breach as a “repudiation” of the terms “not sanctioned” by any source of Customary International Law. Article 60 (3)(b) alternatively defines a material breach as "a violation of a provision essential to the accomplishment of the objective or purpose of the treaty." We will focus on Article 60 (3)(b), as it perfectly covers Turkey's behavior's crux issue.

This convention provision essentially implies that a state can be ejected from a multilateral treaty if its actions run contrary to the purpose and nature of that treaty. Turkey is serially guilty of this charge. The Rome Statute defines a crime of aggression as any hostile action by one state against another. These activities include, but are not limited to, invasion of neighboring states, the bombardment of urban centers, the blockading of ports, the annexation of another state's territory, and occupation of the said territory.

Turkey has committed at least two of these high crimes against the general peace. It has not only invaded Syria and Iraq for dubious reasons but has also occupied both states' territories. It has carried out extensive military operations within these areas, much to the detriment of the inhabitants of Kurdistan.

Crimes of aggression are in diametric opposition to the spirit of mutual defense that characterizes the NATO alliance. The Turkish government has a well-documented hatred against the Kurdish people; it has regularly positioned itself as the national antagonist in the saga of Kurdish independence. It is no coincidence that it's all of its military operations in the last decade have explicitly targeted the areas of Syria and Iraq which play host to autonomous Kurdish political entities. Moreover, by treating its NATO ally Greece as a mortal enemy, the Turkish have demonstrated to be a dangerous force for destabilization in the eastern Mediterranean.

The NATO treaty contains no mention of another member state attacking another. The absence of such a prohibition demonstrates that the framers of the NATO treaty never envisioned such a prospect taking place. Nonetheless, any threat of military action is a material breach of the treaty's provisions, specifically Article 8. Other NATO member states' responsibility is to condemn and expel states who manifestly lack any respect or consideration for the global legal order we rely on for security and, therefore, peace.

Turkey will one day emerge from the condition it finds itself in. The ghoul of Ankara will one day no longer be the ruler of Turkey. He is but a man, and one day he will either die in office, be deposed, or perhaps even be voted out. Turkey has a future beyond the dead grip of Recep Tayyip Erdogan's cold autocratic hands. When Turkey does emerge from its ataxia, the NATO community should welcome it back with open arms.

Turkey is a beautiful society, educated and modern, with much to offer the world in terms of its human and cultural capital. Its defense capabilities are impressive, and it is a natural geopolitical competitor with Russia. But crimes of aggression cannot be ignored. The ethnic cleansing of Kurdish civilians cannot be brushed under the proverbial table. We should demand of our elected officials that they eject or suspend Turkish membership in NATO. We should see that the NATO alliance is protected from the corrosive force which Turkey has metastasized into. Anything less would be an ugly betrayal of not only the Kurdish people but our solemn made promises under international law.