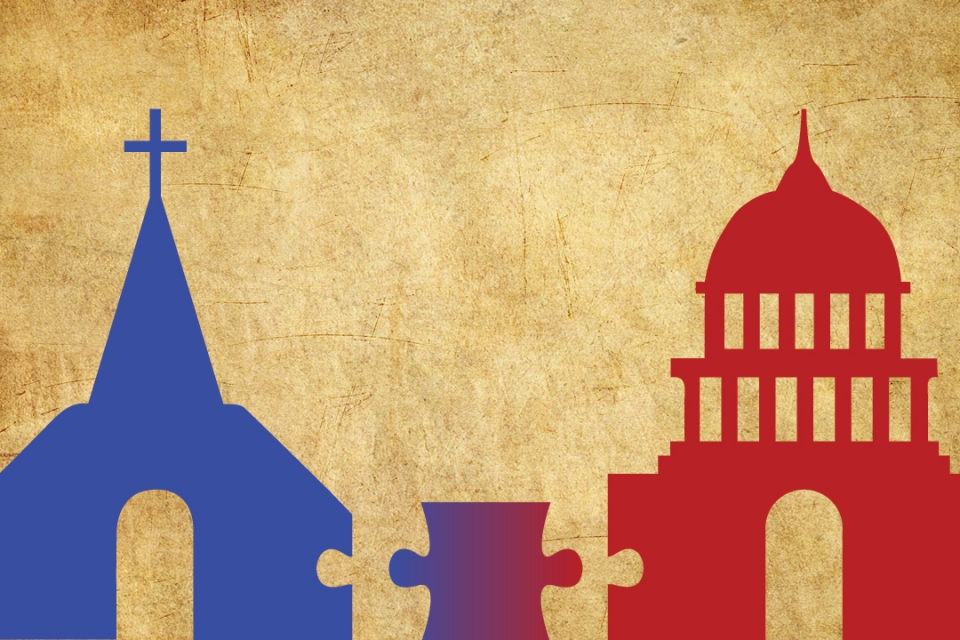 The United States Constitution is put in place to protect, guide and assist American citizens in achieving the most out of their lives. Unfortunately, America has lost sight of what is actually positive for its people, contradicting the constitution in certain aspects while also pledging undying loyalty to it in others. Even with the recent Supreme Court decisions against things such as women’s right to an abortion, it is evident that the separation of church and state in America was broken long ago.

America by no means has created such a law that established a nationwide religion. Nor have they outrightly prohibited the free exercise for choice of religion towards their citizens. However, they have indeed enforced their God upon people, and those who do not follow these commands from the Bible are judged and subjected to mistreatment.

During the Cold War, America implemented two things that initially were seen as oppositions to Russia’s atheist thinking. First, in 1954, President Dwight Eisenhower signed a bill to place the words “under God” in the Pledge of Allegiance, something that school children have said since 1892. The pledge clearly indicates the belief in the existence of what Judeo-Christians believe to be the higher power, god with a capitalized g. Many schools or teachers make adherence to the pledge mandatory. While they may compensate for other religious matters as well, the inclusion of “under God” within the United States school system is a breach of the separation of church and state.

Furthermore, the second thing to happen that broke the separation of church and state, in 1957, Eisenhower signed a bill stating that “In God, We Trust” must appear on all forms of paper and coin currency that the U.S. distributed. Eisenhower explained this addition as a constant reminder that America's political and economic fortune was due to its spiritual faith. However, Americans believe that anything was successful or prosperous in their country only because the Judeo-Christian god is almighty and the only real higher power. It enables the Judeo-Christian followers to believe that any other religious being has had zero impact on the American people or is associated with America's success.

This thought process was then heightened by the events of September 11, 2001, when terrorist group al-Qaeda, led by Osama Bin Laden, attacked the World Trade Center and America as a whole. al-Qaeda and Osama bin Laden were well-known for following the Islamic religion. However, Americans failed to realize that there was a separation between the militant style and following of the Islamic religion that al-Qaeda and even the Taliban follow today versus the calming nature that is typically associated with Islam and the Quran. The Quran even states, “He who kills a soul unless it be (in legal punishment) for murder or for causing disorder and corruption on the earth will be as if he had killed all humankind; and he who saves a life will be as if he had saved the lives of all humankind.” In its nature, Islam is a peace-keeping religion that rewards those who keep up with those standards. The religion isn’t what killed thousands that day, it was a terrorist, a militant group bent on ruining America from the inside out. Yet, certain people, including those in power, view Islam as the murderers and their religion as facilitating those horrors. This motive then furthered the backing of Judeo-Christian beliefs, causing the separation of church and state to further falter in the light of the political economy of America.

The United States and its member states have found themselves in a chokehold of religious beliefs as one of the largest states imposes near destruction between the separation of church and state. In Texas’ 2020 GOP platform, they released a PDF illustrating many concerning elements that would invoke an almost partnership between church and state. Its preamble begins, “Affirming our belief in God, we still hold these truths to be self-evident, that all men are created equal, that they are endowed by their Creator with certain unalienable Rights, that among these are Life, Liberty, and the Pursuit of Happiness.” Words such as “God” and “their Creator” are a blatant breaking of the separation. Moreover, they continue to have ten opening principles for their platform. Two stand out in terms of breaking the separation of church and state. The second principle on their list states, “the sanctity of innocent human life, created in the image of God, which should be equally protected from fertilization to natural death.” This speaks not only to the abortion debate that has argued against women’s rights, but also the inclusion of “created in the image of God” breaks down the wall even further. The sixth principle then blatantly influences the Judeo-Christian religion, stating, “Self-sufficient families, founded on the traditional marriage of a natural man and a natural woman.” Since the Bible historically doesn’t support homosexual marriage, the Texas GOP adopted it into their party platform. With always a realistic chance to win their election, America could see more of these platforms exist in the future, furthering the break in the separation of church and state.

In 2022, the Supreme Court of the United States overturned a law that has saved women’s lives since the 1970s. Roe V. Wade was put in place to give women the right and freedom of choice to get an abortion if they deemed fit. America had finally taken a huge step forward in women's rights, and now almost 50 years later, that step has crumbled as the U.S. falls into an era of dangerous living for women. The fearful factor of this decision leads to questions about what else may be reversed and under what guise it will be. Supreme Court Justice Clarence Thomas has already begun pushing his agenda to reconsider contraception and same-sex marriage rulings. Both beliefs, which would ban contraception and same-sex marriage, have roots in a religious agenda that has stormed the nation's capital.

America used to be a land of combined cultures where anybody could prosper and be free to exercise their constitutional rights. Unfortunately, they have ignored this when it comes to religion. The US has pushed its Judeo-Christian beliefs far too long without apprehending it. The world has so much to offer, and many people are advised to do so, yet when it comes to religion, all rules are disabled. Religions like Islam, Buddhism and Hinduism are rarely recognized or appreciated in school systems. Let alone ever mentioned on the level of Christianity in the U.S. According to Cultural Atlas, Christianity makes up 70.6% of Americans' beliefs. That absurd number roughly translates to 232,627,000 people. With that many people following one belief, it is understandable why America has chosen to back the Judeo-Christian beliefs. However, if they are to do so and follow the examples that have been illustrated, then they must remove themselves as a secular nation. They lie to those who learn of the constitution and follow other religions. A country that lies and alienates its own people is a country filled with toxicity. That is how empires fall, and America may very well be the next significant power to crumble.