Appropriation of Black Culture in KPOP 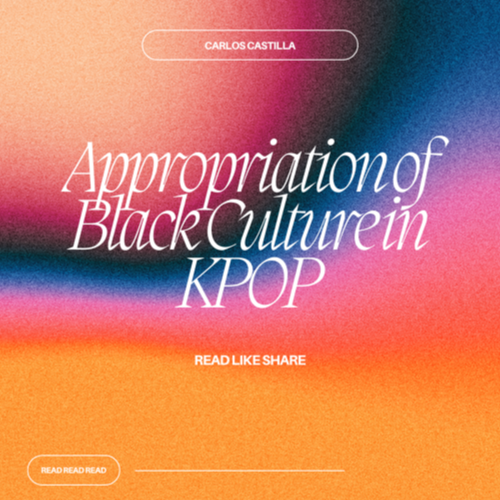 Cultural appropriation is responsible for the success of our favorite KPOP artists.

This inclusion has been an issue in the KPOP industry since the debut of the first KPOP group, Seo Taiji and Boys. This group brought influences of hip-hop culture and mixed their vision into the songs they created. The impact of Seo Taiji and Boys motivated future artists like BlackPink, BTS, CL, BigBang, and more to incorporate hip-hop, RNB, and jazz into their beats.

When one compares RNB, hip-hop, and jazz musicians to KPOP artists, many similarities can be made. When one reaches these songs, the connections are uncanny, yet the credit was not given to the original artist in its release. A great example is What A Man (Good Man) by Linda Lyndell and Whatta Man (Good Man) by IOI. The original Lyndell song was released in 1968, while IOI's remake of this song was released in 2016. Even though IOI had the right to sample the actual piece, Lyndell wasn't adequately given flowers for her originality.

The refrain, "Whatta Man Whatta Man," remains constant for both, and so does the melody. The tricky part here is that IOI did not explicitly say that they were remaking a song by Linda Lyndell, and if a viewer never watched the original music, they'd be misled to think IOI created this song.

BlackPink and BTS, two of the most prominent KPOP groups in the world, both have a record of using black culture outside of hip-hop influence in the beat of their songs. In BlackPink's Lisa's solo debut music video titled Money, she wore box braids and cornrows, hairstyles linked to black culture. In BTS' J-Hope's music video for Chicken Noodle Soup, he wore dreadlocks in his hair, a hairstyle related to black culture. Both Lisa and J-Hope took part in black culture to positively impact their performance in their respective music videos.

BlackPink and other groups also faced controversy for adding AAVE, African American Vernacular English, in their songs. These words have deeper meanings than a love song, and biting off this culture is a pattern artists in KPOP have followed. One of the most famous examples of this can be seen in BlackPink's As If It's Your Last, when Lisa raps, "Uh, I'm a fall in love baby, you gon finna catch me." Biting off black culture in this way harms the black community because their culture is exploited by artists who only engage in it for profit and aesthetics.

Another aspect of black culture in KPOP is vogue. Ballroom culture, an underground scene with black and brown queer people, created the dance style's popularity. This dance style is an act of revolution that black and brown people in Ballroom specialized in to combat anti-queer and racist sentiments worldwide. KPOP artists like Everglow, Chungha, and IVE incorporate voguing into their dances. This is particularly problematic because the Ballroom community has been vocal about how disrespectful it is for people not in the Ballroom to perform “no’guing.”

A Ballroom icon, Leiomy, shared a tweet that said, "'No’guing is referred to any choreographer or dancer who attempts to display voguing with no knowledge of Vogue nor training which often comes off like a mockery" (Leiomy).

Leiomy standing up for the Ballroom community is a pattern black creatives have had to follow to get some respect for their work. Chungha, for her, Stay Tonight choreography, had a large amount of her choreography fit into Leiomy's category of “no'guing. The walks' eloquence, the arms' direction, the stills created by the hands, and the precision of the leg movements are all reminiscent of vogue.

Everglow's LA DI DA has significant incorporation of vogue as well. The break dance of this song requires timing and precision to paint the dance images that vogue naturally does. The dance in this section is difficult to perform for those unfamiliar with vogue. The difficulty of dance should not be praised if it is merely used for its aesthetics. The elements of vogue, sass, courage, and survival are elements absent from LA DI DA and Stay Tonight.

The question of cultural appropriation versus cultural appreciation comes into play when understanding the exploitation of black culture in KPOP. Cultural appropriation involves taking aspects of another community for the profit or benefit of an industry or other social group. In this case, the KPOP industry profits from black creativity and culture. Cultural appreciation in KPOP looks like covering songs made by artists of color with the intent of having fun or appreciating the culture. An example is Itzy's Yeji and Ryujin's cover of Doja Cat's You Right.

The line between cultural appropriation and cultural appreciation is intention and accountability. An artist may want to uplift an identity that is not one that they identify with. If they explicitly state they want to spotlight this community or respectfully showcase elements of their culture with careful research, this is cultural appreciation. However, it is problematic when artists bite off of a community to build an aesthetic or profit from the community's creativity.