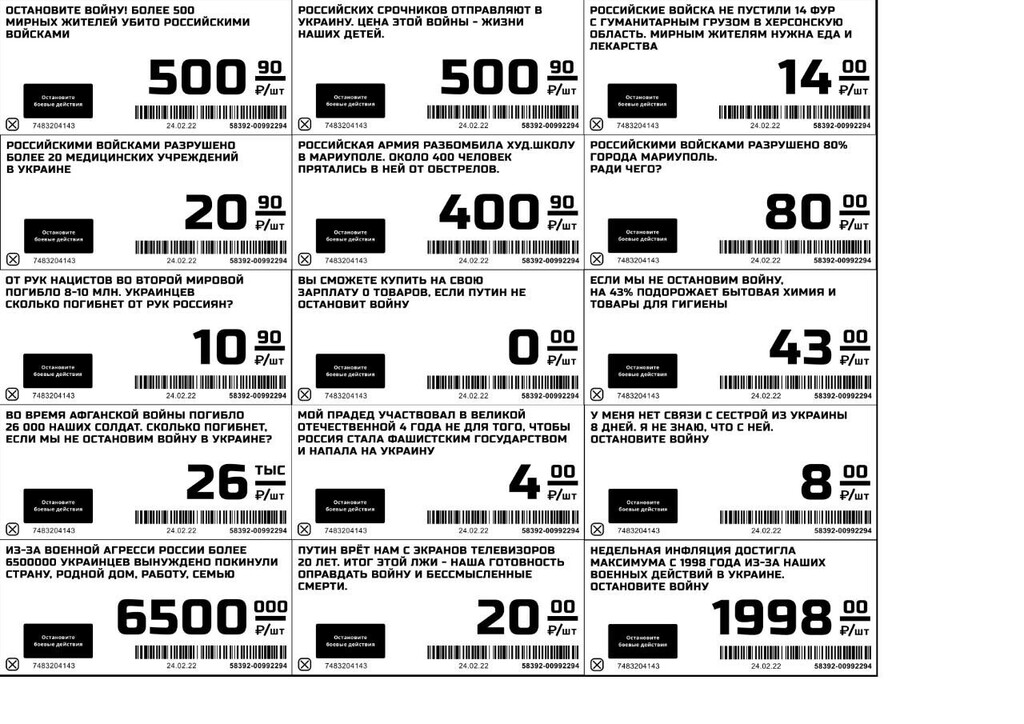 Protests against the war in Ukraine continue, even among Russian citizens who do not approve of Vladimir Putin’s decisions. Those who are demonstrating in Russia risk imprisonment, only by saying the word "war", just as Alexandra Skochilenko was arrested for replacing supermarket price tags with anti-conflict messages.

The woman is an independent artist and musician from Saint Petersburg and now faces up to 10 years in prison for spreading "unauthorized" information, thus, violating the new law against "fake news" imposed by Moscow.

The gesture of information

On the labels of the products, instead of the description of the same, appeared phrases such as: "The Russian army bombed an art school in Mariupol where about 400 people were hiding from bombing". The artist has claimed to be innocent, not because she denies having put the tags, but because they do not contain false information.

The Vasileostrovsky District Court, as stated in the Guardian, has ordered Alexandra Skochilenko to be detained and held in prison until 31 May, on charges of "putting paper fragments in the place of price tags, containing knowingly false information about the use of the Russian armed forces" in a Perekryostok supermarket on March 31.

Why is she being accused by the Russian Government?

The authorities assessed the reasons for Skochilenko’s protest, labeling them "political hatred for Russia", which means that, if found guilty, she will face a sentence ranging from a fine of three million rubles or between five and ten years in prison.

The law against fake news makes it mandatory to publicly describe Moscow’s actions in Ukraine only as a "special military operation". Calling it "war" could result in up to 15 years in prison.

How is the rest of society mobilizing?

Even TikTok communities decided to contribute to the dissemination of information about the war, to help the Ukrainian and Russian people escape from lobotomization imposed by the Putin government. The aim is to spread as much information as possible and get it to the Russian people who are now persuaded by the idea that war never broke out.

The Russians are not only not the enemies but they are the possible solution to this war; the deposition of Putin in the most painless way possible (and it will still be very painful) passes through them. It only remains to notice it quickly to understand that there are allies who can put an end to this fierce and unworthy invasion.