BDS-What Is It Really All About? 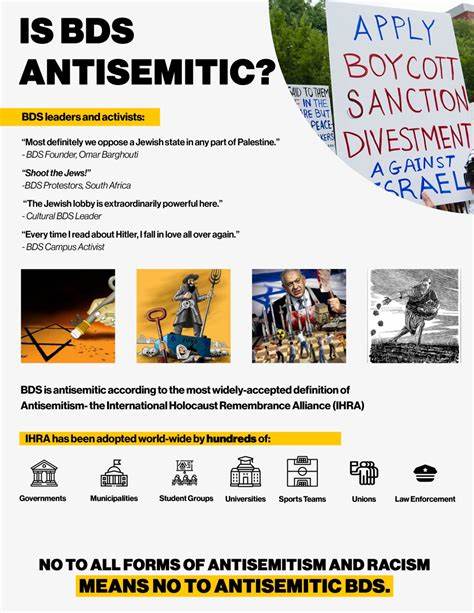 BDS, short for Boycott, Divestment, and Sanctions, is a movement that specifically targets Israel and Israeli products. This movement has spread all over the globe. The BDS movement was founded in 2005 by Omar Barghouti, a self-proclaimed human rights activist. Omar Barghouti is staunchly anti-Israel, despite having gone to school in Tel-Aviv, and having Israeli citizenship.

On the surface, BDS is considered a non-violent way to protest Israeli ‘occupation’ of Gaza and the West Bank via economic and cultural boycotts, as well as sanctions against Israel. Avid shoppers in America may remember when Target stopped selling SodaStream. SodaStream is an Israeli product, and due to pressure from BDS, Target decided to stop selling SodaStream products. When I was in Israel, I visited all three Areas in the West Bank. Area C, which is under Israeli government, employs Palestinians and Israelis, and this includes the factory where SodaStream is made.

The boycott of SodaStream actually harmed the Palestinians working there, as no stores would buy from the company. BDS groups have also pressured an extensive number of musicians to cancel their performance in Israel. Some caved, like Lorde (bdsmovement.org), but some decided that Israel had a right to hear their music, including Billie Eilish (DailyWire), Justin Bieber (codepink.org, haaretz.com), and Ziggy Marley (jpost.com).

Why is BDS Controversial?

BDS singles out Israel as the only country that needs to be boycotted, meaning a plethora of Jews around the world believe that the movement is antisemitic. The controversy is centered around the fact that to many Jews, the movement brings up generational trauma of the years leading up to World War II. Jewish organizations are being boycotted, Israeli products are being removed from stores, and Jews that are both liberal and Zionist are exluded from progressive movements, like the Women’s March. Some might call the movement hypocritical; it is supposedly meant to fight against injustice, but it seems to be causing injustice.

According to Natan Sharansky, an Israeli politician, author, and human rights activist, policies, movements, and statements against Israel become antisemitic when they can be described by the 3Ds test: Deligitimization, Demonization, and Double Standards. (Jewish Telegraphic Agency) The BDS movement has been found to encapsulate the 3Ds.

The goal of BDS, to paraphrase the words of Omar Barghouti himself, is to get rid of Israel as a country: “Good riddance! The two-state solution for the Palestinian-Israeli conflict is finally dead. But someone has to issue an official death certificate before the rotting corpse is given a proper burial and we can all move on and explore the more just, moral and therefore enduring alternative for peaceful coexistence between Jews and Arabs in Mandate Palestine: the one-state solution.”

Another author involved with BDS, Ahmed Moor, had this to say: “Ending the occupation doesn’t mean anything if it doesn’t mean upending the Jewish state itself…BDS does mean the end of the Jewish state. But can’t I see the value in reaching across the aisle, so to speak? The movement may be burgeoning but remains too small. Why shouldn’t we indulge in ad hoc partnerships to get things done? Richard Silverstein, Richard Goldstone, and many other self-proclaimed Zionists have done an immeasurably positive amount of work in skinning the Zionist cat (That’s a deliberate analogy. I don’t kid myself about how difficult it must be for a Jewish person to criticize the Zionist state), shouldn’t they be asked to join the BDS movement? To be sure, I’m not dogmatically against cooperating with people whose views I find objectionable. If it came down to it, I’d be happy to work with the racist up the street to get the city to fix a neighborhood pothole.” (Jewish Virtual Library)  In essence, major proponents of BDS do not recognize the legitimacy of Israel as an established country, when it already is. Strike one.

Many prominent and non-prominent members of BDS use language and imagery to compare Israel and Jews to Nazis, or portaying Israelis as murderous demons that love to kill innocents. This can be seen in the report by the Israeli Ministry of Strategic Affairs called Behind the Mask. Images of Jews waving Nazi flags and puppeteering the world are created and shared by people affiliated with BDS. This is considered Demonization, as all Jews are equated to Israel and called evil, plotting to take over the world.

In an interview between Omar Baghouti and Glenn Greenwald, Baghouti used language that could be considered demonization: “Israel is resorting to its most powerful weapon, if you will, which is using its influence in the U.S. Congress and through that its influence in Brussels and in the E.U. and so on to criminalize BDS from above, after failing to stop it from below…Israel is fostering a new McCarthyism, and nothing less than that because it’s calling on governments that it deems friendly to punish speech, punish activism and campaigning to uphold Palestinian rights under international law…Racism was always there but it was always very couched, very hidden by a supposedly liberal Zionist façade that projects to the world Israeli scientific miracles and cultural miracles and whitewashing very well Israel’s deeply rooted racist colonial society.” (The Intercept) Strike Two.

BDS singles out Israel as a country with extensive human rights abuses, which is not internationally agreed upon. So it seems strange that a country that may or may not be committing human rights abuses is the focus of BDS when there are countries where the entire international community agrees that human rights abuses are occuring, like China, Russia, and North Korea. China has documented abuses against the Uyghur Muslims and other minorities, but BDS is not calling for the destruction of China! Russia is currently attacking Ukraine, and while boycotts have started, they have not been from BDS groups. This is a Double Standard. Strike Three for BDS.

Tying the Knot With Terror?

Aside from the connection between the founder of BDS and violence, the organization itself was discovered to have deep ties to Hamas. The same organizations that support BDS also back Hamas financially. According to a brief that was filed by Mark Brnovich, Arizona's Attorney General, BDS is also tied to the Palestinian Liberation Organization (PLO), which pays families of terrorists for their acts of violence. A BDS group known as Dream Defenders has even sent some of its members to the Middle East in order to meet with another terror organization, the Popular Front for the Liberation of Palestine. (Sun Sentinel)

A member of the BDS group Samidoun in Brussels, Mustafa Awad, is currently in jail for his connections with both the Popular Front for the Liberation of Palestine and Hezbollah. Samidoun in Brussels advocates for the release of imprisoned terrorists. (American Center for Democracy)

BDS is spearheaded by the Palestinian BDS National Committee, or BNC. The BNC is made up of 28 coalitions, the first one being the Council of National and Islamic Forces in Palestine, or PNIF. The PNIF was founded in 2000 in order to coordinate activities between several terrorist organizations, including Hamas, the Popular Front for the Liberation of Palestine, and Islamic Jihad, all of which are designated terrorist organizations. (Behind the Mask)

The BDS movement is considered to be a non-violent way for Palestinians to earn the right to self-determination, to which they are entitled. So I leave you with some questions to ponder. Are efforts to destroy Israel essential to BDS? Can self-determination even be obtained through the BDS movement? And most importantly, is following a movement with direct ties to terror organizations the right way to get there?