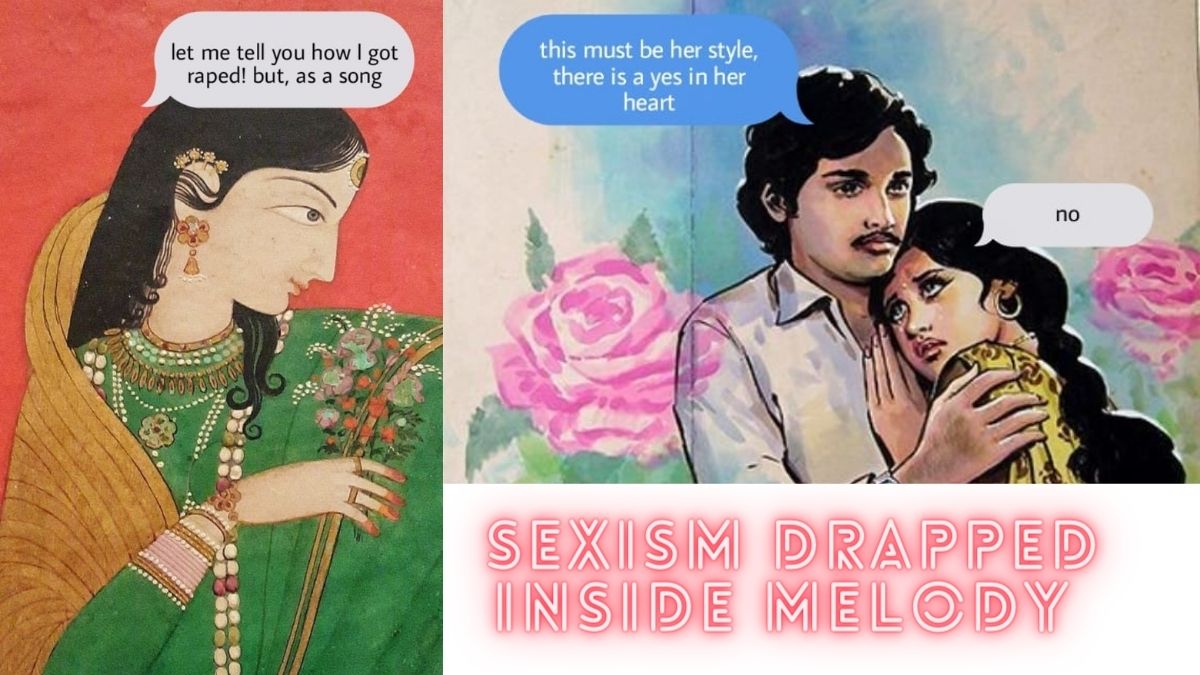 If you haven’t listened to this song by the roadside Romeo to eve tease you. Sister! you just got lucky. This song from the film Judwa (1997) and judwa 2 (2017) got into the mouths of many eve-teasers like a mantra.

Bollywood always provides numerous good songs in the music industry and it's a fact, but it is also true that Bollywood songs and movies have a sexist approach, objectified women, romanticized eve-teasing, harassment, and stalking.

I, as a 20-year-old girl have grooved on such sexist songs once when I was a  kid. Now, when I listen to such songs which are nothing but based totally onto sexism propaganda, I feel very annoying.

Beyond sexism, these songs also romanticize harassment, stalking, and eve-teasing. The trait of most of the songs just revolves around portraying how the stalker aka hero wins the heart of a girl by stalking her and singing these rubbish lyrics ``tera dhyaan kidhr h yeh tera hero idhr h”. I wonder when will this stalking of movies becomes heroic.

Many times, Bollywood acts smart and also creates a scene opposite to its lyrics. The male actor or the female actor is performing a dance that is very well choreographed. all our attention from the lyrics is diverted on to the performance. Like in the song “gandi baat” and “chane ke khet me”.

Let’s talk about some Bollywood songs that make up this list.

This 6-minute song is nothing but a woman dancing and clarifying how a man raped her in the field when she was young. The whole song is about the tragedy that happened with an 18-year-old girl in a field with details. Just have a look at its lyrics.

The lyrics above clearly mean that the woman was trapped in between the rapists referred to as “hunter”. She cried for help but wasn’t able to get one. The rapists stared at her and raped her. She was shocked as she was all covered with a scarf and still, they raped her.

Full marks to the lyricist for the insensitivity. Beautifying a rape incident with a song and some good dance is just being ignorant and insensitive to a crime. I wonder how someone came up with this idea.

This song has always received appreciation for its choreography and Madhuri’s performance. But everyone who has liked it, have neglected this miserable lyric.

The lyricist doesn’t know what no means. The song is a true justification to a sexist comment “ladki ki na me bhi haan hoti h” i.e. there is always a yes! behind a girl's no.

The song gets more annoying when Aishwarya, the lead herself, suggests that even after the refusal he should not get disappointed and try again.

This song lacks the concept of consent and simply puts up the statement that it doesn’t matter if a woman says yes or no because it’s their “style” to refuse boys and there’s always a green signal in their heart.

Stalking, harassment, no place for consent, everything found just in the starting verse of the song.

This song Is a great example of what consequence the woman of this society faces when she refuses or takes action against the man. The creators of this song wanted to tell through the actor has waited at a tea stall to stalk a girl and behaved nicely but despite being a gentleman he has a refusal. The “hero” has lost his calm and now will do something bad to the girl.

Bollywood needs to educate itself about what women deserve and, how to face rejections.

Okay! Okay! Enough body-shaming Bollywood. The beauty of women has always been confined to some characteristics like fairness, curves, body weight. This song is one of the examples of that. The rapper “Badhsha” appreciates the woman for being thick from the area she should be.

This song does not only have non-sense lyrics but also some extremely wrong understanding of how to praise a woman.

Further, the song gets more disturbing when the rapper claims that he is the man.

Well, it’s great to know that mothers are warning their daughters to stay away from such creeps, but what makes Badshah proud of it? Being a bad boy is not a matter of pride!

The most ridiculous thing about this song is the girl grooving and dancing over pathetic lyrics and regarding the man “karta-dharta” that is the savior. And that man is talking rubbish.

Every next song is just putting up a wrong example of what masculinity looks like.

This is one of the most popular music videos of honey Singh as this is his comeback song. No matter how much his fans appreciated this song, it’s very problematic.

This song is also misogynistic like any other song by yoyo honey Singh. Honey Singh itself claims to be a womanizer and warn the woman. It would have been better if this man would have worked on himself than warning other women out there.

The songs have objectified women in each line by calling them diamond, or silicon doll, or whatnot. This song has also been nominated for the best indie-pop song of the year which questions other artists' work that is better than this one.

These were just a few of them, Bollywood has tons of sexist songs. Despite Bollywood’s potential to deliver amazing songs with meaningful lyrics, we have such songs in the field.

Bollywood has a whole genre called item songs which do nothing but objectifies women in each line. Referring to women as “cheez”, “maal Gadi”, “diamond”, “coca-cola” and all is an old habit of Bollywood which is being continued till date.

It bothers me how the celebrities agree to perform on such pathetic songs despite being “role models for several other people. Not only the celebrities performing but every member related to it is responsible for such pieces.

We must start boycotting such songs they do not deserve to be appreciated or danced over!

All the information you have poured in is on point. Yes, music is proving to be a misogynist. Incredibly articulated, the article.

@sayanijha thank you so much!

‘The Kashmir Files’ director not safe in India? Given ‘Y’ category CRPF protection by Central Government over conflicts surrounding the film