Bridgeton:- A Saga Of Diversity 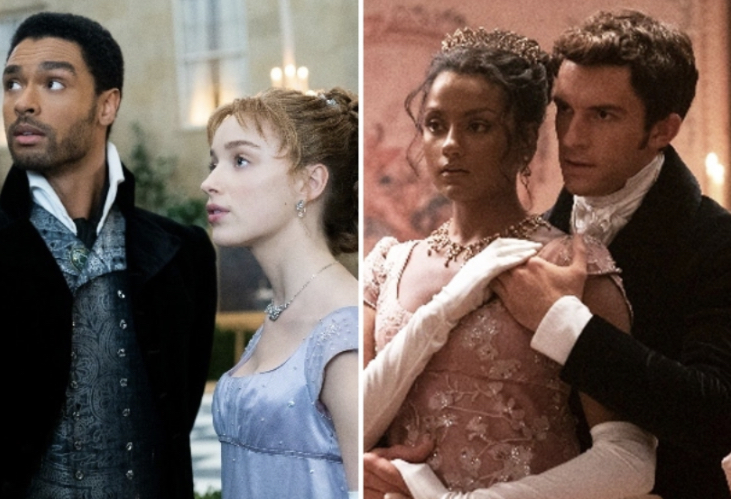 As the world is constantly evolving, we notice things around us to adapt to the evolution, and so is the current web series. The representations of people of color in western movies and series have evolved with time. But previously, different racial communities like the Indians and Blacks were portrayed with several stereotypes.

The stereotypes of Indians are as follows –

Initially, all Indian characters were assumed to have a weird and wacky accent. There is a disbelief that Indians are supposed to be funny-sounding and grammatically incorrect. Apu from The Simpsons is an example of Indian stereotypical accents. The character Apu was so offensive that a documentary called ‘The Problem with Apu’ was released in 2017.

Hindi is assumed to be the only spoken language all over the country.

3.     Deliberate use of complicated names.

Indians get generally mocked because of their names. The Indian characters are assigned exaggerated names.

India is a country with a concerning rate of social inequality and poverty. Foreign films often tend to showcase India with a high rate of poverty and no modern infrastructure. “The Darjeeling Limited, Million Dollar Arm, and many other mock and generalize Indian cities as having nothing but shoddy shacks of buildings and half -naked children.” (Screen Rant) 5.     Indian cuisine does not always give you diarrhea.

Indian cuisine may be spicy for westerners, but it does not always give you diarrhea. Also, it does not smell different. The other common stereotype is how all Indian gravies get referred to as ‘curry’.

6.     Use of supporting characters for comic relief.

Usually, Indians get represented as shop clerks, doctors, or any other supporting character. They are hardly given any scope for character development or background stories. Some examples are Aziz Ansari’s lead role in Master of None and Rahul Kohli in The Haunting of the Bly Manor.

Like Indians, Blacks get represented with various stereotypes such as –

They mainly function in films and television to guide White characters out of challenging circumstances. Critic Greg Braxton noted in Los Angeles Times, usually a woman, the Black best friend is there “to support the heroine, often with sass, attitude and a keen insight into relationship and life.”

Generally, Black men get portrayed as drug dealers, pimps, con artists, and other forms of criminals in television shows and films. The number of black people seen in these characters fuels the racial stereotype that Black men are dangerous and drawn to illegal activities.

As Black people got forced into slavery for hundreds of years in the western world, it is no surprise that the majority of stereotypes about Black people are that of the domestic workers or nannies.

The web series Bridgeton, based on a romance novel series by American author Julia Quinn, which is streaming on Netflix, is one massive example of the representation of various races. The series, produced by Shonda Rhimes, is a period drama. The characters represent the richest of the rich of London in 1813. According to romance novelist and historian Vanessa Riley, Black nobility existed, even a Black duke. Bridgeton is set in 19th century London, where the Queen belongs to a different race, and this matter does not cause debate. In the show, the Queen is a Black woman who portrays an accepting world filled with an equal opportunity where it wasn’t normal to see Black elite and middle-class people; a duke, footman, lady’s maid, or even a respected boxer. Its showrunner Chris Van Dusen said, during an interview, that they wanted Bridgeton to “reflect the world that we live in today.”

In episode 4, Season-2, “An Affair of Honor”, Lady Danbury (Adjoa Andoh) says to Simon (Rege-Jean Page), who goes, “Look at our queen. Look at our king. Look at everything it is doing for us, allowing us to become. We were two separate societies divided by color until a king fell in love with one of us. Love, Your Grace, conquers all.” Rege-Jean Page states that this is a significant detail in the series. He says, “I like to represent the world we live in, the audience we serve, and people who always lived.” (Oprah Daily)

We can notice numerous Indian representations in the series, such as bangles, Indian-ish embroidery, jewelry, masala chai, and melodramatic tunes from Bollywood movies and even the Hindu wedding tradition. Various Indian languages were used in the series, such as Hindi (Didi, which means older sister), Bengali (Bon, which means sister), and Tamil (Appa, which means father), exhibiting the various parts of India. Nisha Sharma, a romance writer inspired by Julia Quinn, praised the efforts of the series towards authenticity. She said that "from the jewelry to the Haldi ceremony, the hair oil massage, to the music, the cardamom tea, the use of Kate’s full name at the end of the show, and the slight change in accent when the sisters speak to each other compared to when they speak to someone who is British.” (BBC News)

Nisha Sharma also mentioned that “Bridgeton’s alternative reality is a place where people of color can co-exist and experience love, joy and complicated relationships without the trauma that history brings of oppression, colonialism, and racism.” OTT platforms are a way to unite people from various traditions and cultures. We all wish for more shows like Bridgeton to showcase how the world is getting evolved.

1 week, 4 days ago by andysamberg