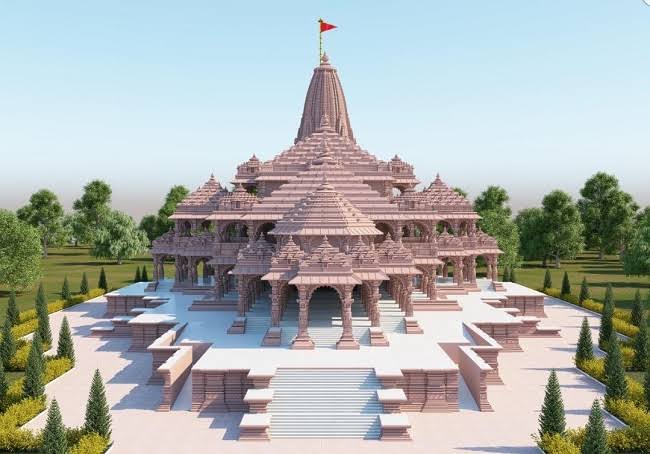 The Ram Janmbhoomi dispute is one of the most controversial disputes in the history of India. It has been a major political, historical and socio-religious debate that this country has witnessed for several decades. The reason behind the dispute is the plot of land in Ayodhya, Uttar Pradesh, believed by Hindus as the birthplace of Lord Ram and thus called Ram Janmbhooomi. It is said that the site originally had a temple dedicated to Lord Ram which was then demolished and a mosque was built on the very site, profoundly known as Babri Masjid. In defence, Muslims claims that the plot was inherited by them and Mir Baqi a commander of the Mughal Emperor Babur, built a mosque there during 1528-29.

The history of the disputed land goes way back centuries consisting of various stages.

Initially, in 1528, Mir Baqi constructed a mosque at the controversial plot however, Hindus claimed that the same place is the birthplace of Lord Ram and a temple dedicated to him used to reside here. According to the Hindu community, out of the three domes of the mosque, under the main dome was the birthplace of Lord Ram. The first dispute for the plot was recorded in 1853 and eventually, in 1859, the British authorities fenced the disputed site. While Muslims were granted permission to worship inside the mosque, Hindus were given a mere platform outside to perform prayers.

The major controversy took place on December 23rd 1949 when idols of Lord Ram appeared mysteriously inside the mosque in response to which Hindus said that Lord Rama himself appeared and on the other hand Muslims alleged a foul play from the Hindus, placing the idols. The Uttar Pradesh government then ordered to remove the idols but KK Nair (District Magistrate then) suspected that would lead to riots and hurt Hindus’ religious sentiments. And the government locked it declaring it as a disputed construction.

The questions and proof

The first question that comes up with this dispute is what is the proof of Lord Ram being born there? It is quite impossible to provide proof of something that took place thousands of years before. All the proof and ancient material ought to be deeply buried or altered or destroyed since then, especially when this country has faced so many invaders and faced the wrath of the invaders and trespassers because of the treasure this country used to be in every aspect whether its science or literature or lifestyle. There is evidence that ancient libraries and universities were burned down by the Mughal invaders. Then how can we possibly expect a record of something so ancient?

The Archaeological Survey of India(ASI) in an excavation of the site under the Allahabad Court orders nearly 15 years ago found grave evidence that led to the foundation of the decision taken by the Supreme Court in favour of Ram Mandir.

The Supreme Court reported that the structure beneath the disputed plot in Ayodhya was not an Islamic structure, but the ASI has not established whether a temple was demolished to build a mosque.

The underlying structure found was scientifically tested by the ASI team. Later on, it

claimed that there were remains of an ancient Hindu temple under the disputed structure providing all the proof required for those who questioned the existence of any Hindu relevant site on the disputed land.

But the real question is why only the evidence of the existence of Lord Ram is questioned? There are no questions raised on other religious prophets such as Moses, Jesus Christ or Mohammed. People accuse that Hindus only have their word and their religious belief as their proof but that is the same with the other religions. Secularism should mean respecting everyone's religious beliefs but not condescend and target a particular religion.

In the year 1984 Vishwa Hindu Parishad formed a committee for the construction of a temple on the disputed land. In 1986 on the petition filed by UC Pandey, Faizabad District Judge KM Pandey ordered uplift of the lock on the construction on February 1st thus permitting Hindus to worship. On December 6 1992, the nation witnessed one of the shocking riots. Hindu activists in the number of lakhs gathered including VHP and Shiv Sena demolished the structure themselves that ignited communal riots all over the country. But this rebel did not go unnoticed by the opposing side and in 2002, a train that carried Hindu activists was set on fire in Godhra killing about 58 people and causing the deaths of about 2000 people all across India.

From several decades till 2019 the country witnessed many court petitions and the Hindus kept waiting for the decision for the acceptance of their belief and religious sentiment that was infiltrated nearly 500 years ago by invaders.

But as the leading BJP government acted on the hope it gave to the Hindus’ in the year 2019 on November 9 a five-judge bench of the Supreme Court ruled in favour of Ram Temple. 5 acres of land was given for the mosque and 2.77 acres of disputed land was given to the Hindus for the Ram temple.

After keeping Lord Ram idol in a temporary tent that hurt the religious feelings of every Hindu for 28 years, Ramlala finally shifted to the rightful place.

On 5 August a grand program in the honor of Bhoomi puja of Ram Mandir was organized. Attended by 175 people including Prime Minister Narendra Modi, RSS Sarsanghchalak Mohan Bhagwat, and UP CM Yogi Adityanath.

But while India is considered to be a secular country it was shameful to witness the outraged Muslims showed when this long-awaited decision was passed. They were calling black day in the history of justice and disrespected the Supreme Court by doing so and condemning the decision. While Hindus do not voice against when there are always found the remnants of ancient Hindu temple wherever a Mughal construction now resides. They do not voice against the textbook who only show the greatness of the Mughal Empire while completely being ignorant to the real fighters of the history, the real born of this motherland India, all in the name of secularism. Then why this intolerance was the only response to the weight of 500 years of Hindus for finally seeing their belief, their God found the place deserved.

Development of Prayagraj and Voter's mood

Fall Of A Keeper And it’s Hell: 1 Year Of Bikru Bloodshed