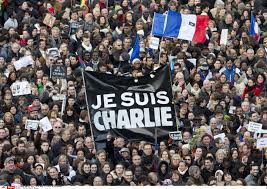 Freedom of Speech is protected and recognized as a human right under Article 19 of the Universal Declaration of Rights. However, it is something that people still do nowadays; they are being killed for what they say, write, think, or even draw.

It was in 2015, located in Paris, when 12 staff members of the French newspaper, Charlie Hebdo, were killed in a terrorist attack because of what they were publishing.

What do they publish?

The newspaper is very famous in France and now all around the world for its unique and original drawings. They publish with humor and satyr on current events, especially about politics and religion. But what they published had sometimes shocked people; it was not everyone's taste, which had led the newspaper to receive many threats. For instance, it was in 2011 that their offices got burned down. But for the journalists of Charlie Hebdo, it has never crossed their minds to stop what they were doing.

Here is an example of a caricature showing the prophet Mahomet. The French movie inspired the drawing based on a real story, "Intouchables," which is about a middle-class man who had a fatal paragliding accident and developed paraplegia. His world is turned upside down when he hires a black jovial man ex-con to help him.

That front cover is an example of why the terrorists attacked Charlie Hebdo, but it does not explain the violence of their actions. Everybody knew they were the target of many menaces, but who would have thought an act like that would happen.

The terrorist attack was led by the jihadists that were against its caricatures. Indeed, for them, the newspaper was making too much fun of the religion even though a joke is only an imitation of a person or object with exaggeration, which creates a comic effect, as we can see above.

Wednesday, January 7, 2015, it was 11:15 am; Charlie Hebdo was attacked. France is stopped. My country is touched. As I was in High School, during my history class, I was writing down my exam when our teacher interrupted us crying. She looked horrified. She explained that something terrible had happened to her favorite journalists and mentioned, "my generation has been killed."

Like most teenagers, we did not perceive and felt it as bad as it was at that time. We did not understand why our teacher was crying and what was happening. It was after a while, the same night the news passed on TV, that the whole country realized the cruel act of these terrorists.

Images, sounds, and interviews with witnesses were diffused. We were shocked to see all these abominations. Twelve people were killed; drawers, writers, psychiatrists, journalists, journalists. Eleven people got wounded. It was an absolute massacre.

Million people paid tribute to the victims; An art with the victim's faces was drawn on a street in Paris, and the slogan "Je Suis Charlie" ("I am Charlie" in French) was created a few hours after the attack to support the victims and their families.

"Je Suis Charlie" stayed the main slogan for months in France and the world; we could see it everywhere. People are making shirts, banners, graffiti on trains, posters on monuments... it took big and great extents that it has also become "nous sommes Charlie" ("we are Charlie").

The attack has mobilized people all around the world. Despite the events, the newspaper published an article, only one week later, named "numéro des survivants," meaning the "survival newspaper" in French. An article sold not more than 7.5 million times within France in the entire world.

Although Charlie Hedbo gets attacked, countries such as Germany have asked to get copies of it which led to an incredible increase in the newspaper. Before the attack, it only sold around 30.000 copies per week. But it is now not less than 100.000 copies in the world.

As I mentioned above, it has never crossed the newspapers' minds to stop what they were doing. A year after the attack, it was published with a front cover showing a bearded God, carrying a Kalashnikov covered in blood, titled "1 year after, the murder is still running".

But what happened was only the beginning of about 27 awful terrorist attacks in the country.

The same year, it was on November 13 that another attack happened, killing 131 people and about 350 injured. It is an attack that is still in the process. Only to name a few...

In 2016, during a National Holiday, a man drove into a crowd that was only watching the firework and killed 86 people, including several children and families.

In 2017, a Tunisian yelled "Allah Akbar" before murdering two women in a train station.

In 2020, a teacher who showed caricatures of Prophet Muhammad to his students was beheaded, and people took back the slogan from Charlie Hedbo and renamed it "Je suis Samuel" ("I am Samuel" in French). Samuel was the teacher's name.

We do not know when an attack can happen or where it will occur. France was the target and still is nowadays. But with these attacks, Freedom of Speech is dying but killing.

We count 2623 mosques in the country, but since the numerous terrorist attacks, the government has decided to control not less than 99 places of Muslim worship, which made some of the closings, without counting the mosques in the process of closing.

That is why, from 2015 to 2020, about 15 mosques have closed their gates, making a total of 23 completed today. For example, a city called Beauvais, located above Paris has a mosque that only opened this year because it was closed for five months.

However, the ones that close are only those where the government has suspected "separatism."

All these closing was unprecedented.

According to Marianne's website, an exciting article mentioned that the prefect Christian Gravel said, "Today, a toxic preacher who regularly disseminates anti-republican, encouraging hate, anti-semite, homophobic or anti-christian words no longer feel free to do so."

He has also said, "Fighting against radical political Islam will protect the Republic and protect Muslims."

We can ask ourselves; will the government stop at only closing worship places, or will they go further in their process? It might be the beginning of getting something done to stop these atrocities.