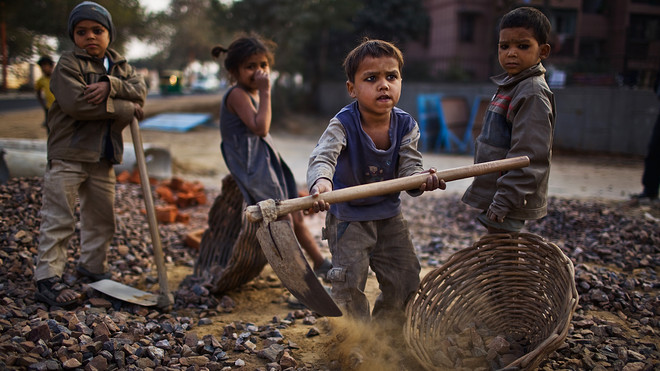 Childhood is a precious time in a human’s life, but is it the same for everyone? No! 152 million children across the globe are the earning hands of the family, out of which India accounts for 33 million children.

Despite being a famous issue, the majority of people practice it. According to UNICEF’s data, the violation of children’s rights is increasing and not decreasing after COVID-19. India has been one of the massive contributors of child laborers during this time.

The garment industry, firework sectors, agriculture, bricks kiln small-scale industries are some of the sectors in India that demand children below 14 for paid or unpaid work.

India has worked on the issue of child labor since independence. Several laws have been passed for children rights, such as Article 21A and 45 that states that the state is bound to offer free and compulsory education to every child between 6 to 14 years of age, whereas in Article 24, it mentioned that any child under 14 is prohibited to work in factories, etc.

Ever since then, people are aware that employing children is against the child labor Act, but not much effect has been put in place to stop it and this is questionable.

What is child labor?

In simple words, child labor is any hazardous work that exploits children or deprives children of attending school.

According to International Labor Organization, not every work that includes children can be considered under child labor. If a child works in a safe environment and does not prevent him from education or the child helping the family after school cannot be classified as child labor.

Further, the International Labor Organization defines child labor as a work mentally, socially, physically, or morally dangerous to children and interferes in their schooling.

The constitution of India prohibits any child under the age of 14 from working in factories, mines, etc.

States and sectors with the most child labor, in India.

Child labor practices can be found across the country, mostly in rural areas. States like Uttar Pradesh, Maharashtra, Bihar, Andra Pradesh, and Madhya Pradesh contribute highly to the number of child workers.

Uttar-Pradesh has the most number of child laborers, which is 20.6% of the total number. Maharashtra with 11.4%, Bihar 10.4%, Andra Pradesh 9.3%, and Madhya Pradesh with 6.6% [source: IOSR Journal of Humanities and Social Science (IOSR-JHSS)].

It is noticed that as the population increases, the number of child labor acts also increases.

A report says that more than 2.5 lakhs children are indulged in domestic work or working at restaurants, which the government of India on October 10, 2006, banned children from working at dhabhas, hotels, resorts, etc.

The pandemic has made the situation worse as the numbers are increasing day by day. It is reported post-pandemic, the number may rise due to poverty. The number is going to depend on each state and sector’s situation.

Cause of child labor in India.

. The primary cause of child labor in India is poverty and inadequate public education.

Poverty is the leading cause of all the unethical practices in India. Child labor is also one of them. Substandard families consider children as helping hands and the breadwinners for their house. From a minute age, they force them to work as laborers and end up ruining their childhood.

The government of India provides free education to children, but the quality of education is visibly poor. Many times, the unavailability of teachers has been r. These schools have an unwelcoming environment which prevents students from attending schools and getting involved in work.

In a report, it is stated that industries hire children as it is “cost-effective” for them. An adult’s wage is five times more than a child’s salary, where sometimes they work for free.

After the Covid-19 pandemic, a considerate migration of workers was seen. Due to this, the numbers of child labor have been increased.

During mass migrations, people lose their economic structure, weaken their health, and support which forces their children to earn.

Effects of child labor in India.

Our constitution has already laid down several laws to eradicate this issue. Strong bodies like UNICEF and International Labor Organization strive each day to see a pen in a child’s hand instead of tools. Then where are we going wrong?

In my opinion, parents should be educated, on the importance of sending their child to school instead of working. Factories, mines, and other sectors should be monitored, and checked to control these practices. The government should also work on the quality of learning, and environment of schools to improve children’s attendance.

Child labor is the root of several budding problems in a country, and this social issue needs our attention. And we must follow on quote i.e. “Let us decide we should never drink water from a home where child labor is employed”- Kailash Satyarthi.

The next time you see a child working near you, do your bit as a citizen!