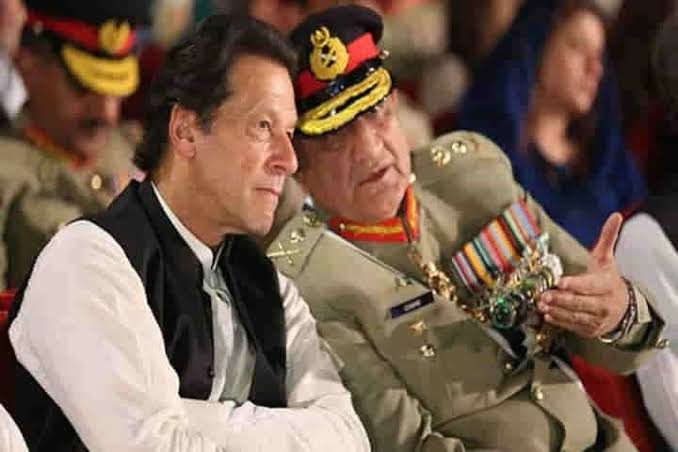 "It means that the general must understand that he is not a free agent and cannot hope to become one. He must work within the limitations imposed by the fact that he is working for a democracy, which means that he must sometimes modify or abandon the soundest military plan and make do with a second-best."― Bruce Catton, Mr. Lincoln's Army

Both the civil and the military institutions are duty-bound for the nation's sovereignty. The absenc of one of them causes disruption and imbalance in governing. That is why civil-military relations tend to have pertinent impotence for any country. If a fulcrum is weak or loses the instrument is useless; similarly, if the civil-military ties aren't strong, the nation finds itself in a tumultuous state which drags the country into the darkness of chaos. Pakistan is a living example of relations between civil authority and the military.

My opinion on the topic is built upon the argument presented above because there are many grey areas concerning civil-military relations in Pakistan. No one, be it civilian government or military, is blameworthy for the chaos, and the reason for this is our hysterical history. The circumstances were chaotic enough that the consequences of musical chairs played between civil and military rule are still faced.

When it comes to modern statehood and government, the concept is built upon two levels of the agency. Level 1 is accorded by people through free and fair elections to elected leaders. The masses empower the elected leader to make decisions on their behalf. Level 2 is accorded by elected representatives to specialized bureaucratic institutions such as the military. This is the narrow agency known as "administrative agency" that requires the agents to follow the directions of the principal, i.e., civilian leadership.

'They are temporarily violating the second-order of agency to be able to protect the first one. This statement is the argument presented by the military while toppling over with the claim that civilian leadership has violated their trusteeship of public confidence. To repair the primary relationship, secondary administration must be broken. (Dasgupta, 2001)

However, the above argument seems valid because when civil supremacy fails, it paves the way for military intervention to temporarily dissolve the constitution for the permanent solution by implementing martial law. Samuel Hannington rightly puts in that "to eliminate the possibility of military encroachment into government affairs; civil supremacy must be present" Pakistan not only lacks this civil supremacy but has been facing the presence of Islamists. It is undeniable that the military has been ruling the nation; hence, we see Pakistan as a young and violent nation. Because of its weak roots and polarization, Pakistan lacks the critical factor, i.e., a civil-military relationship that allows the civil institutions to flourish and the military to stand in this city environment.

Civil Leadership and Military rule in Pakistan are two parallel narratives that never meet on common ground. In such a scenario, the advice of the present chairman of the Pakistan People's Party(PPP), Bilawal Bhutto's advice of "sorting out differences" (Civil-Military relations in Pakistan, 2017), seems way too possible. They keep in mind the mess created because being on page with the non-elected subordinate institution is a tactic to conceal the disagreements and disrupt relations.

There are two critical factors for the dissonance: colonialism that resulted in a catastrophic and violent atmosphere of partition and another factor creating a foundation for the newly established state as per the vision of Quaid, which was ignored by the pioneers' leaders succeeding Quaid. Pakistan wasn't among fortunate countries that possessed an abundance of gifted politicians at independence. Hence, the nation found itself haphazardly putting a government into place.

Liaquat Ali Khan lacked the necessary political perspective, Nazimuddin was a perennial neophyte, Ghulam Mohammad kept a hopelessly flawed ego, and Iskander Mirza was too blinded by the power to use it effectively. None of them measured up to the demands of national leadership, nor were they comfortable with the configuration that represented contemporary Pakistan. Ironically Pakistan was at a time of independence in dire need of a leader who could pick up where Jinnah left, offset the vicegeral tradition inherited from the colonial period. A leader who could stand above feudal and tribal rivalries and who could, while acknowledging the country's dominant religious tradition, transcended scriptural interpretations of constitutional procedures as needed.

More an administrator than a combat officer, Ayub Khan possessed that determination, character, and balanced personality which was needed to modernize and expand the forces and at the same time hold in the check the more gregarious and aggressive of the uniform risk-takers. His perception was sharpened by sustained political instability, and he was able to examine Pakistan's ethos. He concluded before Suharwardy's removal that the nation was ill-suited for the political experience that emerged from colonial settings. (Ziring, 2005), being more systematic, better organized, more given to routine, and highly disciplined. Ayub Khan was the need of an hour and kept in mind these traits martial law was bound to happen, but that was the starting point that vicious cycle of regular military intrusions started.

The fate of Pakistan suffered the extremism in the name of Islam by Zia ul Haq and witnessed a new dimension on civil-military relations when Musharraf undertook the war on terror.

Since the time of independence, Pakistan's politics reins in the hands of the Army, be it direct or indirect control. However, twists and turns continued to occur. Army Chief General Ashfaq Parvez swore to take the Army back into barracks. It has been 20 years or more since the military didn't topple the CONSTITUTION OF PAKISTAN in the name of coup d’état, but the military continued to intervene. General Kiyani(2009) and General Raheel Shareef(2014) considered taking direct control but decided not to do so.

This change of mind demonstrates military rule is no longer necessary as Army has already attained its primary goal of de facto control of the county's nuclear and missile program. The attainment of the de facto Army hence continues to intervene but by remaining behind the curtains. While staying at the back, the Army cooperated more with Islamabad's civilian leadership involved in ousting Nawaz Sharif in 2017 and tipping electoral scales in favor of Imran Khan in 2018. With PTI in power, Imran Khan established smooth working relationships with General Headquarters within one year. For that purpose, PM Khan granted General Bajwa 3 years of extension, made him a member of the government's National Development Council, and took him along with DG ISI to his US visit. Moreover, COAS agreed to freeze the military's budget in recognition of the economic problems the country is facing.

Like civil authority had and has its loopholes. Like Pakistan, it is nearly impossible for the military not to intervene because of the wreckage made by an internal division between provinces and between modernist forces and forces of radical Islam. Similarly, Pakistan Army was saddled at birth with its paradoxical identity: "symbol of Islam but the substance of colonial force, quite distant from the body politic of the fledging state."

Despite having a contradictory identity, the Armed forces managed to gain superiority. The fact that Pakistan Army has to be the best-organized group and Pakistan has been in three historic wars with India and that both the neighbors possess nuclear weapons makes them a more volatile region than in the past. It thrusts the Army into the center of decision-making on the issues related to foreign policy, especially with India and nuclear matters. Colonial history, weak leadership at the time of creation, and relations with neighboring India are the key reasons civil-military relations have been on the verge of disruption.